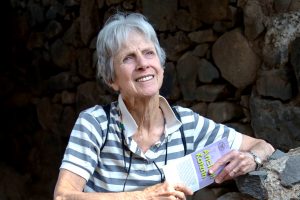 Only a few kilometers away from Nazareth is an excavation site called Sepphoris, a place that Carol Meyers discovered was multicultural in antiquity.

“It’s one of the things that drew us to the site,” said Meyers, a field archaeologist and Mary Grace Wilson Professor Emerita of religious studies at Duke University. “It seems to show that the Romans, Jews and Christians could co-inhabit a place with no problems, at least that we could find.”

Ancient Sepphoris is said to be the birthplace of Mary, the mother of Jesus Christ — although, according to Meyers, “there’s no archaeological evidence to prove it or disprove it.”

At 2 p.m. today, July 10, in the Hall of Philosophy, Meyers will talk about “Jews, Christians, and Romans: Multiculturalism at Ancient Sepphoris.” Her lecture will be a continuation of the Week Three interfaith theme, “What Archaeology Tells Us About Biblical Times.”

Meyers, one of the world’s foremost feminist Biblical scholars, began teaching at Duke University in 1977.

Meyers said being a feminist Biblical scholar means “using whatever resources we can find to make the place of women in Biblical times more visible to us.”

“We tend to take for granted the Biblical text,” she said. “To begin with, of all the named people in the Old Testament, only about 10% to 15% of them are women. So right away, since you know that the population at the time was more than 10% to 15% female, you see that they’re being shut out of the story. One of my goals is to find them, make them visible and learn something about their lives.”

Along with her husband and fellow Duke University faculty member, Eric Meyers, Carol Meyers has led thousands of students on archaeological digs in the Middle East.

Meyers said that living in harsh working conditions for long periods of time with students and professors eventually helped to break down perceived social and academic barriers between the two groups.

“When you’re with students 24/7, under rather harsh living and working conditions, it really breaks down any hierarchies that might exist in the university between students and faculty,” she said.

And while funding and completing the archaeological digs was difficult in and of itself, Meyers said the teams often encountered local resistance while working at dig sites.

“Not all the local people were happy with non-Jews excavating, say, an ancient Jewish synagogue,” she said. “And they weren’t happy with the way students were dressed, wearing tank tops and short-shorts.”

According to Meyers, it wasn’t possible to argue their reasoning for excavating particular sites with locals, especially Orthodox Jews.

“But what we agreed on was to have students, while they were in the field, to wear whatever they wanted,” she said. “When we walked through the village to the place where we had our field site, we agreed to cover up.”

Part of the thrill of archaeology, according to Meyers, is that “you never know what you’re going to find until you actually dig.”

“Archaeologists are always offended, to some extent, by their own presence (at a site),” she said. “And in the 1980s, when we began the project, there was a lot of turmoil. And there still is — turmoil in terms of Jews and Arabs not getting along so well. So the possibility that Jews and people of other religions did get along, was very enticing for us.”

That possibility is the reason Ancient Sepphoris is such an interesting place for Meyers and her students.

“The past can be meaningful,” she said. “Terrible things have been done in human history. But there are also glimmers of light. I hope that looking at Sepphoris will provide one example of that.”

Audience members at today’s lecture can access slides that accompany the presentation from their smart devices at
chq.org/screen.