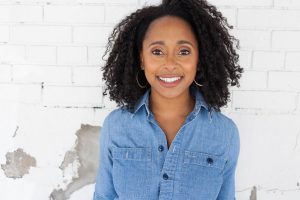 Rae Wynn-Grant is dedicated to fostering greater understanding of a peaceful, conservation-minded coexistence: between people and large carnivores.

Wynn-Grant will deliver the morning lecture at 10:45 a.m. today, July 10, in the Amphitheater, as part of Week Three, “A Planet in Balance: A Week in Partnership with National Geographic Society.”

Wynn-Grant is a carnivore ecologist who has expertise in using statistical modeling to understand how human-like systems can affect spatial patterns of carnivore ecology and behavior. Wynn-Grant has taken trips to study the grizzly bear population in the Greater Yellowstone Ecosystem, as well as lions in Tanzania and Kenya.

Originally from California, Wynn-Grant has always loved science and the outdoors, citing her favorite shows on the National Geographic television network as inspiration.

In an interview with National Geographic earlier this year, Wynn-Grant described what it means to work with the organization she loved as a child.

“When I was a young teenager, I used to tell people I wanted to host a nature show on National Geographic,” Wynn-Grant told National Geographic in February. “It was the only career path I was interested in, and of course I had no idea how it could be accomplished. As a city kid without much experience in the outdoors, I felt very different from the hosts I saw on TV, who were typically older, white males, but I shared their affinity for studying wildlife.”

When Wynn-Grant was introduced to wildlife ecology in her final years of college, she was immediately hooked.

“It was at that point I realized that there was a science career that could give me the adventures I was seeing on the National Geographic Channel,” Wynn-Grant told National Geographic. “It is a tremendous honor to be part of the NatGeo family, especially in a science capacity — it is truly a childhood dream come true.”

Wynn-Grant is also Equity, Inclusion & Diversity Officer on the board of governors for the Society for Conservation Biology, which works toward an environment of inclusion for scientists of different races, religions and identities.

In the future, Wynn-Grant said she hopes to make allies of her colleagues, to dismantle the barriers that exist in working environments and increase access to positions in STEM-related fields and organizations.

In her postgraduate research, Wynn-Grant went abroad to Africa to study lions and carnivore interactions in human-made environments, eventually moving on to work with the bears she loves.

“One of the major similarities is that both East African lions and North American black and grizzly bears often live at the interface with human communities, causing problems that can threaten conservation efforts,” she told National Geographic. “All of my science work is dedicated to helping people and carnivores coexist peacefully, no matter in which part of the globe.”

See grizzly bears in action LIVE at the Grizzly and Wolf Discovery Center in West Yellowstone, Montana. Ask questions for experts Rae Wynn Grant Tut Fuentevilla in the comments below!