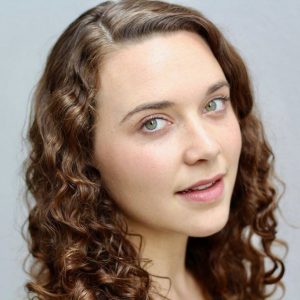 Stennett plays Hermia in CTC’s traveling production of Shakespeare’s A Midsummer Night’s Dream. She said performing at a variety of venues as the show moves around Chautauqua County keeps the process fresh and fun.

“I absolutely love that we travel to different spaces,” Stennett said. “Finding interesting ways to interact with the architecture and scenery at each location keeps you engaged and active.”

For example, Stennett recently performed at Children’s School and had to climb in and out of windows in the pouring rain to make her entrances on time.

“It keeps you on your toes,” Stennett said.

She will also be playing guitar as part of the musical ensemble in the upcoming New Play Workshop, Agent 355.

Where she’s from: Originally from Eagle, Idaho, Stennett said she grew up jumping between her hometown and Los Angeles for her parents’ jobs.

Growing up, she would tag along with her mother as she performed in community theater and eventually decided she wanted to audition herself. At an audition for The Sound of Music, she sang in front of a crowd of people for the first time.

“I went up, in front of this full room, and I started and it was fine until halfway through when I just started bawling because I realized that everyone watching me was terrifying,” Stennett said.

But where many might be put off by such an experience, Stennett was resolute.

“I remember thinking in that moment, at like, 5 years old, ‘Next time, I’m not going to cry,’ ” Stennett said. “I was so disappointed that I couldn’t work on that show, but next time I auditioned, I didn’t cry.”

Since then, Stennett has stuck to theater. She’s currently in her third year in the M.F.A. program at Case Western Reserve University Cleveland Playhouse.

Favorite theater memory: Each and every impactful relationship she’s made with her fellow actors. Stennett said that growing up, she knew theater was enriching her life and broadening her horizons, and that she was always thankful for each interaction.

“I think the theater is full of people who are fascinated by humanity,” Stennett said. “You walk into a theater and know that people care about stories and they care about people. It gives you this common ground to really invest in one another.”

In any form or style, Stennett said she loves sweet potatoes more than any other food.

What she’s reading: She just finished Letters from Max: A Book of Friendship.

The author of the book, Sarah Ruhl, will be speaking during Week Seven as a part of the Chautauqua Literary and Scientific Circle, and Stennett said she wanted to be prepared to attend the talk.

She’s also reading The Drifters by James A. Michener and is preparing to start City of Girls by Elizabeth Gilbert.

What she’s watching: “The Office” on Netflix.

Since the popular show will shortly be removed from Netflix and added to NBC’s separate streaming platform, Stennett said she’s trying to get through the series on Netflix before it’s too late.

“It’s been fun to go back to ‘The Office’ and really dig into all the characters that I’ve known for a while,” Stennett said.

Favorite part of Chautauqua: The bevy of programs offered throughout the season.

Stennett said that, fortunately, her schedule is such that she’s able to attend most of the performances she wants to see.

“I have a whole ton of them highlighted to go to,” Stennett said. “I’ve been absolutely loving it.”

Stennett also said that the kindness and acceptance shown by Chautauquans, particularly the members of the Friends of Chautauqua Theater, has been something she greatly appreciates.

Plans for the future: For the upcoming year, a residency at the Cleveland Playhouse.

Stennett will be performing a number of shows on the main stage there, including The Merchant of Venice.

After that, she hopes to move to New York City to immerse herself in the robust creative community in the Big Apple.

“I think that will be a great launchpad, just because it’s such a creative space,” Stennett said. “We’ll see where it goes from there.”