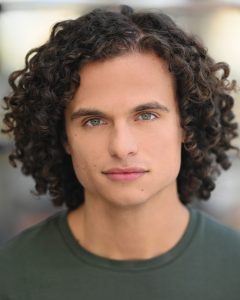 Matos is taking on the role of Lysander in Shakespeare’s A Midsummer Night’s Dream. He said that playing a character who is so earnestly, deeply in love was both interesting and challenging.

“It can be hard because he’s so archetypal, you know?” Matos said. “It can seem like just a projection of what love is, or it’s easy to be jaded and laugh at him, but taking that on and trying to find the open, pure-hearted joy of a first love has been difficult, but fun.”

He will also be performing in CTC’s upcoming production of One Man, Two Guvnors as a handful of supporting characters and as part of the live musical ensemble. He will be playing rhythm guitar, harmonica and potentially the accordion.

Where he’s from: Matos grew up in two very different parts of the world.

Until he was 6 years old, Matos lived in Belo Horizonte, Brazil, running around in the forest and enjoying nature.

“I just chilled in the forests a lot,” Matos said. “There was so much color and so much warmth and life.”

After the first six years of his life, Matos moved to Los Angeles, where he lived until he went to college. In L.A., Matos said his interest in theater was nurtured through the vibrant Hollywood film scene.

He initially studied music in his undergraduate studies, majoring in music with an ethnomusicology and composition focus while minoring in theater. He then doubled down on theater and now holds an MFA in acting from Brown University/Trinity Rep.

Favorite theater memory: Instead of a single, favorite role, Matos said he enjoys the small pockets of family he builds with each show he’s in. He said that no matter the show or role, connecting with his fellow actors is a highlight of the experience.

“Because the theater community can be so small, each time you do a show, you’re building that family more and more,” Matos said.

The simple dish is Matos’ comfort food. He said since he’s vegan, the dish provides him with a quick and easy plate of hearty enjoyment.

Before becoming vegan, Matos said he’d enjoy his rice and beans with finely chopped collard greens and a steak. He’s had to get creative since giving up meat.

What he’s watching: “Stranger Things” and “Spiderman: Into the Spider-Verse.”

He said that “Into the Spider-Verse” was the most recent in a series of superhero movies he’s been binging.

“I’ve always loved superheroes and wanted to be one,” Matos said. “So starting last summer, I watched all of the Marvel movies to be prepared.”

Favorite thing about Chautauqua: Before the season started, Matos enjoyed the peace and quiet of the relatively empty Institution.

“When I was younger, I kind of wanted to be a monk,” Matos said. “I’ve always appreciated serenity. So I was like, ‘Oh, this is so nice. I can just work and relax and enjoy this quiet.’ ”

Now that the season is in full swing, Matos said he enjoys the myriad of musical offerings he’s been able to experience. He particularly enjoyed seeing Diana Ross, and the Chautauqua Symphony Orchestra performance of “Harry Potter and the Prisoner of Azkaban.”

Dream vacation: Matos said that despite growing up in Brazil, he’s never spent extensive time in the Amazon.

He said he’d love to fuse activism and relaxation on a trip to the Amazon; he’d take the time to kick back and enjoy the forest, but also take some time to take photos and try to spread awareness of the deforestation that is occurring in that part of the world.

Plans for the future: Returning to sunny Los Angeles.

Matos said it’s been around seven years since he’s been home for any considerable period of time. He hopes to involve himself in film or TV in California, while still staying entrenched in live theater from the East Coast as much as possible.

“I definitely know that I need the sun,” Matos said. “And I have a really strong community in L.A. That’s where my home is, and I just feel a lot more like myself when I’m there.”