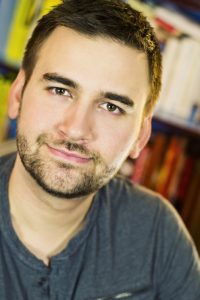 A lifelong Chautauquan, comedian Dan Wilbur has returned to settle an old score.

More than a decade ago, his first performance at the Pier Building was a testing ground for his comedy career. Now, with years of experience under his belt, he returns to showcase his evolved comedic skills.

At 7:30 p.m. tonight, August 1, at the Pier Building, Wilbur will perform an hour-long set for the Week Six theme, “What’s Funny? In Partnership with the National Comedy Center.”

“When I was about 19 years old, I headlined down at the Pier Building as one of my first stand-up performances,” Wilbur said. “Now is the time for my retribution: I headlined it 13 years ago, and I’m coming back to do it again.”

Wilbur’s parents are lifelong Chautauqua residents and he recalled his best summers on the grounds. Wilbur remembered working at Children’s School and attending lectures.

Wilbur grew  up in Cleveland, where he discovered his love for smart comedy and theater. Wilbur stood out as a funny teenager attending an all-boys Catholic high school, without having to be the class clown.

“I wasn’t a class clown,” Wilbur said. “I was playing to the teachers; I never got detention because I was making the teachers laugh and then sometimes the students, but I would always go for the teacher.”

Wilbur got his start in comedy while a freshman at Bard College, where no one knew him as the funny kid he was in high school, so he took the opportunity to put himself in the limelight.

After graduating from Bard with a degree in the classical arts, and rewriting a Greek play as a comedy, Wilbur realized he found what he wanted to do with his life: comedy.

He now lives in Brooklyn, and decided to return to see his family and attend lectures like he did when he was younger. Wilbur said it wasn’t until he arrived that he approached staff with the idea for a show.

“I’m here to see the Smothers Brothers, I was just here to see comedy,” Wilbur said. “So, this was a good way to come back and do some stand-up in a place I love.”