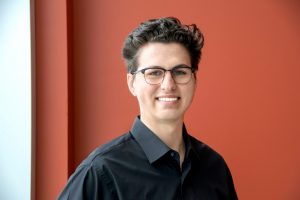 As the lighting design fellow, Chambers works on every production throughout the season. On the mainstage shows — The Christians and One Man, Two Guvnors — he serves as an assistant designer, and for the three New Play Workshop shows — How the Light Gets In, On the Exhale and Agent 355 — he takes the reins as full designer.

Chambers said one thing he enjoys about working with light is the ways light can shape the mood of a scene.

“Light is really cool because, while there are certain parameters you have to work within, you get to work with color, texture, line and all these artistic principles,” Chambers said. “It’s beautiful because it has both tangible and intangible elements and can seamlessly transform the emotions in a scene.”

Chambers draws comparisons between the work of a lighting designer to the techniques used by painters. He said that both roles require a precise understanding of how lighting can subtly, yet at the same time drastically, change the feelings evoked from a piece.

Where he’s from: Chambers has moved several times throughout his life.

He was born in southern Illinois, but moved to Upstate New York, where he lived until 2001. Then, his family relocated to Bowling Green, Ohio. He earned his undergraduate degree from Bowling Green State University, and is now pursuing his master’s degree at Purdue University in Indiana.

Early in his life, Chambers wanted to be an actor and said he still loves performing, but realized that the life of an actor wasn’t something he wanted to commit to. He graduated from Bowling Green with a degree in peace and conflict studies, but through working as a carpenter in the university’s scene shop, he realized he enjoyed working on the technical side of plays.

Favorite theater memory: Instead of a single show or project, Chambers said he loves the multitude of opportunities and connections his work provides.

“Having the chance to connect with a team of artists who are making something greater than themselves is always worthwhile,” Chambers said. “I like those collaborative opportunities, and I also think that working in a field that is meant to be viewed and meant to be experienced by a group of people creates a palpable connection in a way that other art fields might not.”

In particular, the pizza at Pisanello’s Pizza in Bowling Green. Chambers said he hasn’t found pizza anywhere else that he likes as much as slices a Pisanello’s.

According to Chambers, there are very few good pizza options in Lafayette, Indiana, where he goes to school. He hopes that anyone reading this article who might want to open a pizza joint there will do so soon.

“I’ll be there day one,” Chambers said.

What he’s listening to: Experimental hip-hop and noise music.

Some of his favorites include Street Sects, Pusha T’s album Daytona and The Daughters.

Favorite part of Chautauqua: The hills.

“I live out on the glacial plain and the Great Black Swamp, so being somewhere out in nature with this great, hilly topography is so nice,” Chambers said. “It’s a great summer recharge.”

What’s next: In the short term, finishing his MFA at Purdue over the next two years.

Looking further down the line, Chambers said he hopes to stay in the Midwest, working in either Chicago, Indianapolis, Detroit or Cleveland. He said he’d like to find work in the architectural field, while still pursuing theater design work on the side.

“I want to make sure I’m taken care of financially, while still being able to do the work that I like and that I think is interesting and important without having to worry about if it’s going to keep me in house and home,” Chambers said.