Christine Herbes-Sommers was mentoring and helping a fellow filmmaker as he was creating a documentary about his two grandmothers — one who was in vigorous health and the other who was declining. They worked together with a geriatrician who authored a book about the stages of end of life.

“In making the film and talking to him, we started talking about how urgent the issue (of end of life) is,” Herbes-Sommers said. “In an aging population in general, it’s something that we don’t think about.”

She said people are living longer, but there’s an underlying notion that older generations are a burden to the rest of society.

From there, Herbes-Sommers created her own film that examines the challenges and opportunities of aging as people live longer in the modern world.

At 3:15 p.m. today, July 16, and Wednesday at the Chautauqua Cinema, Herbes-Sommers will screen her film, “Coming of Age in Aging America,” and hold a Q-and-A immediately following the film.

In this film, distributed by American Public Television, Herbes-Sommer said the story emerged gradually after talking to experts and doing research.

“You start with an idea and then all of a sudden the idea gets really complicated,” Herbes-Sommers said.

Herbes-Sommers knew she would soon be in the age group the film highlights, which is part of the reason she made the film now.

“It’s not incidental, but I was 64 at the time,” Herbes-Sommers said. “I knew that most films take about five years to make and by the time I was done with this I would be 69, so I would be in that cohort and be living it.”

The documentary delves into the greater longevity people are experiencing and society’s view on longer lives. Experts in the film discuss the popular opinion that the world can’t afford the extra years.

After research, networking and fundraising, she brought the project to Norcross, Georgia, to the town coffee shop. There, Herbes-Sommers and her team interviewed people about aging and the film’s themes.

In Atlanta, Herbes-Sommers worked with the deputy mayor and explored the community in a similar way. 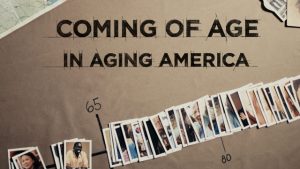 “I could say it was challenging, and it certainly was, mostly to get normal people to think about their lives,” Herbes-Sommers said.

She wants people in any stage of life to think about the current expectations and fears about aging.

“This is the main theme of the film: There’s a way to think about modern life with greater longevity as a cycle that can shift the norm that we currently impose on life,” Herbes-Sommers said.

Herbes-Sommers said this will be her last film as she begins exploring other ventures and attends art school. There wasn’t a pivotal moment in Herbes-Sommers’ life that led her to filmmaking, but as a political science major at Knox College, Illinois, she found herself entrenched in the political climate of the time. The “flavor of the day” movements and societal problems pushed her toward filmmaking.

“In fact, my first film had to do with the feminist movement — that was timely,” Herbes-Sommers said. “There was a gradual and strong increase of desire (to be a filmmaker).”

She began her career as an animator, and after graduate school she created Red Cloud Productions with a colleague. She was also on staff at WGBH, a public broadcasting station in Boston. But Herbes-Sommers said at her core, she is an independent producer and director.

Many of her films are shown in college and high school classrooms, but “Coming of Age” brings a different perspective to audiences of all ages. Herbes-Sommers said she creates her films for the next audience — the “community level, social change audience.”

“In some ways, I hope that the Chautauqua audience comes away saying ‘people should know about this stuff and how can we adjust our community,’ ” Herbes-Sommers said.