Students in the Chautauqua School of Music’s Voice Program will hold their first recital, “The Music of Robert and Clara Schumann and Johannes Brahms,” at 7:30 p.m. Wednesday, July 3 in Fletcher Music Hall.

Each participating student will sing a piece written by either Brahms or one of the Schumanns; each piece is a lied, a type of German art song — meaning that it is not from a larger work such as an opera or a musical. Each one is about three to four minutes long. Though each song will be sung in German, the translations will be in the programs and before each student performs, Michael Dean and Maria Fortuna Dean — both vocal instructors — will recite the translation of the song the student is about to sing in the style of a poetry reading.

Each lied will also have a musical accompaniment on the piano, which will be provided by one of five of the School of Music’s voice faculty: Julias Abrahams, Michal Biel, Martin Dubé, Katelan Tran Terrell or Jinny Park.

The Voice Program chose to feature work from the Schumanns and Brahms for the first recital largely because this year marks the 200th anniversary of Clara Schumann’s birth. She was one of the most distinguished composers and pianists of the Romantic era — as were her husband, Robert, and Brahms, with whom both Schumanns were especially close.

“I think, nowadays, people are aware of (Clara’s) music, but as is the case with many female composers, especially at that time, it was harder for them,” said Donna Gill, head coach of the Voice Program. “But she wrote a number of really beautiful songs, as did her husband.”

Erin Wagner, a voice student from the Manhattan School of Music, will sing one of Clara Schumann’s pieces titled “Warum willst du and’re Fragen,” which translates to “Why will you question others?” This song sheds light on unconditional love.

“I chose this piece because it has been extremely important to me as a female singer to explore and represent the feminine response to the human experience,” Wagner said.

Wagner sees Clara Schumann as a pioneer for female musicians, since she was able to gain recognition and respect during a time when many female artists could not.

Mackenzie Jacquemin, a voice student from the University of Cincinnati College-Conservatory of Music, will also be one of the performers; she will be singing “Immer leiser wird mein Schlummer” by Brahms, which essentially translates to “Even lighter becomes my slumber.” The piece is about growing close to the end of one’s life; the singer contemplates the time they have left and calls out to their lover.

“I think the melody is beautiful, and I think the way that Brahms kind of intertwines the vocal line and the piano line is incredible and really paints the picture of the story and the scenery,” Jacquemin said. “On a technical side, it’s pretty challenging, but not so difficult that it’s too much; you can enjoy it and be in the moment.”

Marcel Sokalski, another voice student from the Manhattan School of Music, will be singing “An eine Äolsharfe,” or “The Air Harp,” by Brahms. In this piece, the singer ruminates on the sound of a nearby air harp and the emotions it evokes, such as melancholy and nostalgia.

“(The air horn is) this very warm and inviting sound and yet very mysterious,” Sokalski said. “For me, it’s bringing up these melancholic and nostalgic memories. … I love the rich textures in it, and the harmonies and the progression of the poetry.”

In total, 21 voice students will perform more than two dozen songs at the recital, giving audiences and the students a chance to hear some of the program’s vocal diversity and some of the best works of the Schumanns and Brahms.

“Being a part of a recital where you’ll be able to hear so many different interpretations and voices singing these songs is truly so special,” Wagner said.

‘Hello, Chautauqua’ to Break Down Walls Between Community and CTC With Showcase 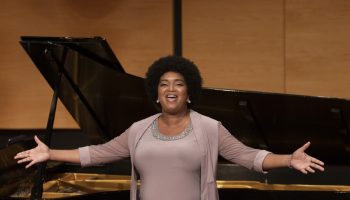