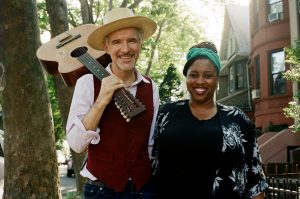 Dan Zanes has trouble pinning down exactly what kind of music he plays.

“I think we call it folk music,” he said. “Or maybe social music? Folk music? All ages, social folk music. Something like that.”

But the Grammy Award-winning artist is sure of one thing: The music he plays is for everyone.

“It’s always important to us that everybody is a part of the show,” he said. “It’s an intergenerational experience. Very communal.”

Zanes and his wife, Haitian-American jazz musician Claudia Eliaza, are bringing their energetic act to Chautauqua at 5 and 7 p.m. Tuesday, July 9 in Smith Wilkes Hall, as part of the Family Entertainment Series.

In keeping with the goal of the FES to provide entertainment for individuals of all ages and inclinations, the musical duo said the show will be sensory-friendly.

“We want to open the door as wide as possible,” Zanes said. “If someone who is on the autism spectrum wants to come see us, we make sure that they and their family are able to enjoy the show. Above all, we want these shows to be fun, and we want everyone to have access to that fun.”

As a part of that attitude of accessibility, the couple said they encourage audience members to stand up, dance or sing along. The environment of the show, they said, will be one of relaxation and celebration; everyone is encouraged to have fun, whatever that means to them.

Zanes and Eliaza incorporate a variety of instruments into their performance. Both artists sing and play guitar and percussion instruments. Zanes plays mandolin and harmonica, and Eliaza plays flute and trombone. Working in tandem, the duo covers a wide range of the instrumental spectrum to bring a variety of sound to the stage.

The husband-wife team will be performing a diverse lineup of songs at their Chautauqua performance. Everything from some of Zanes’ greatest hits like “All Around the Kitchen” and “House Party Time,” to recent tracks from the couple’s songbook Dan Zanes’ House Party!: A Family Roots Music Treasury, are fair game to appear onstage.

Eliaza is a certified music therapist, and has experience helping listeners find peace and happiness in music. She said today’s performances will be ones where everyone can be comfortable being themselves.

“The shows are not intimidating,” Eliaza said. “Even if you don’t sing or don’t feel that you have a voice, I think a lot of people who come to our shows feel very comfortable and even express themselves vocally.”

And although the show is a part of the FES, Zanes said no one should feel excluded if they don’t have children. Instead, he doubled down on his “music for everyone” message.

“We think the shows feel kind of like a family reunion,” Zanes said. “Sometimes the music is for the older folks, sometimes it’s for the younger folks, but nobody gets left behind.”