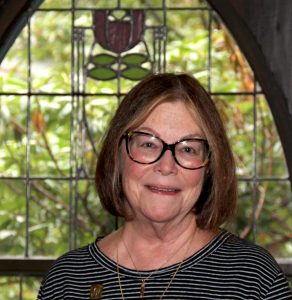 At the time, leading suffragists, including Susan B. Anthony, made appearances at Chautauqua. Now, almost a century later, Linda Ulrich-Hagner is bringing the movement back to Chautauqua.

At 3:30 p.m. today, July 12, in the Hall of Christ, Ulrich-Hagner, retired teacher and docent of the Roycroft Inn and the Roycroft Campus, will present “Alice Hubbard and the Roycroft Women’s Fight for Suffrage” as part of the Oliver Archives Heritage Lecture Series.

Elbert Hubbard originally came to Buffalo following a business venture for the Larkin Soap Company, and after 20 years of working for LSC, he decided to switch careers. In 1895, Hubbard created the Roycroft Press in East Aurora, New York, where he and his second wife Alice edited and published two magazines: The Fra and The Philistine.

In addition to the Roycroft Press, Elbert and Alice Hubbard were members of the Chautauqua Literary and Scientific Circle.

After retiring in 2002, Ulrich-Hagner wanted to keep working and felt being a docent was an extension of teaching. She is currently a docent for the Roycroft Inn and the Roycroft Campus, as well as a member of the Aurora Historical Society. Ulrich-Hagner had originally planned to do a presentation on the Women of Roycroft, but her research, on both The Fra and The Philistine, led her to discover the connection of the Suffrage Movement, so she created a brand new presentation. Along with Alice Hubbard, Ulrich-Hagner added the work of great women suffragists such as Anthony and Elizabeth Cady Stanton, author of The Woman’s Bible, to her presentation.

“What (Stanton) did was she took the Bible apart and took out all the derogatory comments about women; ones like women were a second thought, and she rewrote the Bible,” Ulrich-Hagner said. “These women that fought for suffrage were just incredible and smart.”

In her research, Ulrich-Hagner had read an article about Anthony that named her the “most famous lesbian of the 19th century.”

“She had many relationships with many of the suffrage women,” Ulrich-Hagner said. “Every time Elizabeth Cady Stanton got pregnant, and she had seven kids, Susan B. Anthony just was crazy about it. She just was so aggravated because she felt as though Stanton’s mind was not working as well because she got married to a man and had kids. (She) just felt that a woman was much better off single or with another woman, and (those women) were better for the suffrage fight.”

Anthony spent time at the Roycroft Campus and even gave a lecture at the United Methodist House on the grounds in 1888, on “Moral vs. Political Power,” a lecture Ulrich-Hagner thinks Chautauqua could still host in the present day.

“Chautauqua is always ahead of the curve in terms of discussions and what is going on,” Ulrich-Hagner said. “The fact that we had to fight for suffrage for so long — it’s really hard to believe it took so long back then.”

Ulrich-Hagner said women’s suffrage is especially timely since the 100th anniversary of the 19th Amendment’s ratification is coming up in 2020.

“(There is an) importance of the fight for suffrage,” Ulrich-Hagner said. “Many of these issues are still in place. Women are not treated equally in many settings … so the suffrage fight, even though we are voting, is still not over.”