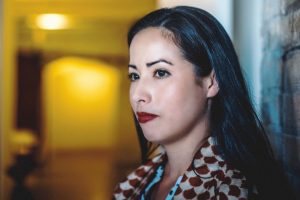 For Chautauquans who have recently visited the Fowler-Kellogg Art Center, a lecturer this evening may look familiar.

In “Four Seasons,” a photo series featured in the “Reconstructing Identities” exhibition, artist Wendy Red Star wears a traditional Crow elk-tooth dress — she is a member of the Crow, or Apsáalooke, Nation — and poses in four diorama-like artificial nature scenes.

“The piece is (an) institutional critique,” she said. “(It’s) critiquing the way indigenous people, our material culture, has been put on display.”

Red Star is a core faculty member this season at the School of Art. She will be speaking at 7 p.m. Friday, July 12 in the Hultquist Center, as part of the Visual Arts Lecture Series. As far as records show, Red Star is the first Native American woman artist to teach at Chautauqua Institution.

In her talk, Red Star will discuss her research-based artistic practice through an in-depth examination of several projects, including “Four Seasons.”

She works with a number of mediums, including photography, sculpture and video, and uses her work to explore Native American ideologies in historical and modern contexts. Red Star draws inspiration from her childhood living on the Crow Reservation in Montana.

“A lot of the work comes from having the space both in distance, but also in time, from where I grew up,” she said.

“Four Seasons” in particular was inspired by a trip she took to the Natural History Museum of Los Angeles County while a grad student at UCLA.

Homesick, Red Star was searching for some element of Crow culture in the city.

“I did find some Crow moccasins,” she said. “But that was the first time that I realized … everyone who is looking at these cultural material objects is thinking that these people no longer exist or that way of living, of culture, doesn’t exist anymore. I had this moment of realizing, ‘Wow, I have my entire traditional outfit here in Los Angeles … and these people are thinking that we don’t exist.’”

The piece intends to show the disparity between generalized ideas about Native American culture and the reality of Red Star’s current, specific cultural identity.

“I’ve known growing up that I’m Crow, and to me when someone says ‘Native American,’ my reference is Crow,” she said. “It’s not a Lakota person, it’s not a Seneca person, but we’ve been put under the same umbrella.”

During her time at the Institution, Red Star will work with the students and emerging artists at the School of Art to help them create historically inspired, research-based pieces. She will encourage them to work with Chautauqua Institution Archives.

“I’m super curious about everything, and I want the students to work from a place of curiosity and questioning,” she said.