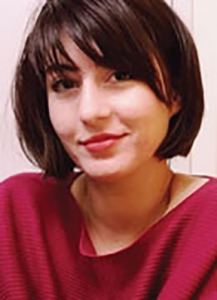 Vincze helps design costumes for the two main-stage productions — The Christians and One Man, Two Guvnors — and takes the helm in designing costumes for each of the three New Play Workshop shows: How the Light Gets In, On the Exhale and Agent 355.

Vincze said her favorite thing about her experience working at Chautauqua so far has been meeting and growing closer to her fellow conservatory members.

“Meeting all these people who come from such different programs, but who are now all in the same boat, has been fun and rewarding,” Vincze said. “Finding our place and giving support to others to help them find their place is the most exciting thing.”

She also said she’s looking forward to the upcoming production of One Man, Two Guvnors because of the sheer scale of the show and how energetic and funny it is.

Where she’s from: Győr, Hungary.

Vincze attended a Catholic school as a child, but shifted to an arts-focused school for high school. She said she knew around age 13 that she wanted to work with costumes and design.

While pursuing her undergraduate degree, she met the professor who would eventually encourage her to earn her master’s in the United States. She’s currently enrolled at the University of California, San Diego, and said that coming to America has been an exciting experience.

“I saw a different way to approach theater and many opportunities,” Vincze said. “It was also just a dream of mine for years. I didn’t really know where it was coming from, but coming here was always a dream.”

Favorite theater memory: When she was 12 or 13 years old, her school teacher took Vincze into their town’s local theater. They got to climb onto catwalks high above the stage and overlook the darkened, quiet space. Vincze said the altered perspective of that experience awoke something within her.

“It was just so magical,” Vincze said. “I just had this, ‘I’m home’ moment. The idea of being behind the stage and making the magic really struck me and stuck with me.”

Favorite food: Instead of a single food or meal, Vincze said she loves snacks in general.

In particular, she enjoys fruits and chocolate; although she can no longer indulge in a chocolate treat since she’s in the process of going vegan.

Her favorite fruit right now is watermelon because it’s refreshing and tasty on hot summer days.

Favorite part of Chautauqua: The natural splendor of the region, the lake in particular.

“I love walking around at night, and the lake is so tranquil and peaceful to explore,” Vincze said.

She said the body of water provides some welcome relief from the hotter Chautauqua days.

What she’s watching: Recordings of Australian singer-songwriter Tash Sultana’s concerts. Vincze said she doesn’t often have time to sit down and dig into a TV series, but that watching concerts is something she can easily enjoy.

“Right now, Tash’s concerts are my big favorite because they’re so raw and so communicative,” Vincze said. “Watching her onstage being so emotional and so comfortable with it is always cool.”

Dream vacation: New Zealand, “for sure.”

“It’s so incredibly beautiful there,” Vincze said. “There are places there that have not even been touched by humans, and that kind of natural beauty is so unique.”

What’s next: First, Vincze will be completing her thesis and residency at UC San Diego. Her thesis involves work on the show Men in Love by Christina Anderson, and her residency will be spent at La Jolla Playhouse.

After that, Vincze will spend at least one year working in the United States, and she’s hoping to move to Los Angeles to get into the television and film industry.