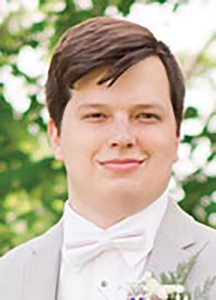 Bennett is involved with every production in CTC’s 2019 season. He assisted sound designer Mikaal Sulaiman in The Christians, will be assisting the sound designer on the upcoming One Man, Two Guvnors and is the sound designer for each of CTC’s New Play Workshops: How the Light Gets In, On the Exhale and Agent 355.

Bennett said one of the coolest parts of his job is helping to build the world of a play — beyond the visual elements.

“Sound can serve as an emotional underscoring,” Bennett said. “I get to think about what elements of the story I can best heighten without any visuals and figure out how I can enhance the mood without the audience even knowing I’m doing it.”

He also said he enjoys how collaborative the design process is. Working with his fellow designers to merge lighting, set, costume and sound design into one cohesive show is something Bennett always appreciates.

Where he’s from: Johnson City, Tennessee.

Jeff Sherwood, who served as CTC’s sound fellow last season, is Bennett’s classmate at Purdue, and pointed Bennett to Chautauqua for this summer.

“He just had such great things to say,” Bennett said. “When I looked more into it, it seemed to have the perfect balance of what I was looking for; assisting designers who are working nationally and getting to design works on my own.”

Favorite theater memory: During his time at the University of Tennessee, he worked on a production of South Pacific and said that seeing the show every night never got old.

“Every night we would go in there, and I’d have a lot to do and lots to coordinate, but around the time the third song came on, I’d stand at the mixer and just bounce back and forth,” Bennett said. “I could get so in the zone with mixing that, and would always just get lost in the music, despite seeing it eight times a week.”

Favorite food: Steak, preferably a sirloin with loaded potatoes on the side.

Bennett said that being raised on a cattle farm gave him appreciation for a good steak from an early age.

Bennett said he watches an iteration of the series every year because the sound design of the sci-fi show refreshes and re-energizes him.

“They really are building an entire universe from scratch,” Bennett said. “Some of those classic choices they make sometimes just kick-start my inspiration.”

What he’s reading: Creative Quest by Questlove. The book seeks to help readers get into a creative mindset, and Bennett said he’s always looking to rekindle his inspiration and creativity.

“(Sound design) is a job that is tricky to just sit down at a desk and do,” Bennett said. “So I’ve been working on ways to make that a little easier.”

Favorite part of Chautauqua: The level of community interest.

Bennett said that every member of the community he’s encountered seems genuinely interested in him and his work, and never fail to inquire about the elements that go into building a show behind the scenes.

“It’s just such a vast wilderness,” Bennett said. “People talk about farms and ranches that are hundreds of thousands of acres, and I’ve just never seen anything like that. I think it’d really just re-adjust my whole sense of scale.”

He’d want to work his way across the entirety of the country, doing everything from scuba diving to going on safaris.

What’s next: Immediately, he plans on finishing the final year in his master’s program. From there, he hopes to keep working at the regional theater level and eventually teach sound design.