Hehr will hold daily Kundalini Yoga meditation sessions at 8:15 a.m. in the Presbyterian House Chapel, and from 5:15 to 6 p.m. Monday, July 22 and Wednesday, July 24 in the Hurlbut Sanctuary.

Khalsa, who considers himself an instructor in technique, began his career almost 50 years ago when he met his spiritual teacher, Yogi Bhajan. Khalsa specifically remembers one of the first things Bhajan ever said to him.

“To become a teacher, you create people who go out into the world and offer some kind of guidance,” Khalsa recalled him saying.

Khalsa has taught classes in  meditation ever since Bhajan certified him in the practice. And, when he arrived at Chautauqua about 25 years ago, he found an opportunity to “pass along what seems like would be helpful.”

For Week Five, Khalsa’s approach is to respond to the moment he finds himself in — one of the best ways to engage with participants, he said.

“There are so many preachers, politicians and promoters of ideas, and they are all saying, ‘If you think the way I think, you will become happier or more successful or have a better society,’ ” Singh said. “And, maybe some of them are right, but almost no one else is saying how to change your own mind, how to think in a new way. So, from my perspective, what meditation is really all about is the work of cultivating new qualities of mind, a quality of non-judgment … (and having a) peaceful relationship with difficulties.”

Khalsa hopes to impart to Chautauquans that there should be some kind of “glorious surrender” of fear and desire, to quietly sit, dim the lights and practice mindfulness and letting go.

Hehr found Kundalini Yoga 20 years ago while dealing with addiction. She said that yoga went hand in hand with her recovery programs, making the whole process easier to handle.

“It allowed me to be OK with me, and to release some of those stuck emotions that you feel when you think you need something to change the way you feel, when you really have all of that within,” Hehr said. “(Yoga) is about turning to our own inner light, rather than that which numbs us.”

After overcoming her addiction, Hehr became certified to teach Kundalini Yoga and meditation, which she has now done for 12 years.

“Kundalini is your potential — (it’s) kind of a creative energy,” she said. “And, the yoga part, gentle movements, helps brings that energy up through your body; it’s a lot about working with the energy centers of the body.”

In addition to yoga, Hehr will be leading Pranayama meditations, which are breathing practices that help with emotions, especially negative ones. The mantras Hehr will also be offering are positive sound currents that connect one to their “inner essence.”

“I would hope that (Chautauquans) come away feeling more uplifted, to be a little more kind, and a little less judgmental towards themselves and others,” Hehr said. “The world really needs us to uplift ourselves on a daily basis to help heal the world, because we’ve got a lot going on.”

Fr. Richard Rohr Concludes Lecture Series with Look at ‘Second Half of Life’

Fr. Richard Rohr: ‘Allow for the Infinite Gift of Mercy’ 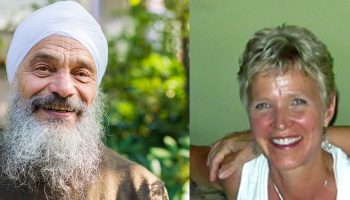