The Capitol Steps to Give New Meaning to ‘MAGA’ with Comedy

What do you get when you mix working in government with having a funny bone? The Capitol Steps, which began as entertainment for a Senate office Christmas party.

“We were all working for Sen. Charles Percy, and we decided to work up some song parodies to perform at the party,” said Elaina Newport, who co-founded The Capitol Steps and has been performing with the group since 1981. “The joke we’ve made over the years is that we wanted to do a traditional Nativity play, but in all of the Congress we couldn’t find three wise men or a virgin. We thought we would do the show just once — after all, we were making fun of the Congress that employed us, so we thought someone would ask us to stop, or fire us, or both. But no one did, so we’re still performing.”

The Capitol Steps will take the Amphitheater stage at 8:15 p.m. tonight, July 31, giving Chautauqua a taste of their political satire.

The group has performed for former Presidents George H.W. Bush, Ronald Reagan, Bill Clinton, and George W. Bush. They performed for Bush Sr. on several occasions, and were nervous at first, Newport recalled.

“They gave us a list of subjects to avoid, and one of the subjects they wanted us to avoid was the president himself,” she said. “So, we did what we could — songs about Congress, etc., and when the show was over, the president came up on stage and said, … ‘Hey, don’t you have any songs about me?’ And of course we did, so with his permission, we did them.”

The Capitol Steps are set to come back to Chautauqua and continue their decades-long political comedy tradition. It’s one thing to tell jokes, but another to bring personal experience alive onstage.

“I think the reason we have survived is partly because of where we started,” Newport said. “After all, we’re kind of making fun of ourselves. We worked on Capitol Hill, and we admit it’s a mess sometimes. But we found it was much easier to go back to our day job the next morning if we could spend the evening laughing.”

“We really felt that, after the 2016 election, people needed a laugh more than ever,” Newport said. “Regardless of who you voted for, chances are you were arguing with your friends on Facebook, or your family over the Thanksgiving dinner table. So, in the weeks following the election, the best after-show compliment we could receive was, ‘I wasn’t sure if I could laugh, but I did, and I feel better.’ That’s what we hope for every time we perform.”

While they try to be bi-partisan, the group thinks the party in power is “always funnier.”

“I like to say that our show is the only place you can see Donald Trump sing a rock song, Bernie Sanders sing a show tune, and Vladimir Putin dancing shirtless,” Newport said. “Once you have the song, the trick is filling it with jokes. The jokes need to have a grain of truth, but you’re halfway there if the song fits the character.”

And the group’s act incorporates leaders regardless of party affiliation — all are fair game.

“We have songs about Trump, Pence, Mitch McConnell, all of them,” Newport said. “But fortunately, Democrats aren’t keeping quiet — so we also have songs about Bernie, Elizabeth Warren, AOC, and Nancy Pelosi. We try to include everyone.” 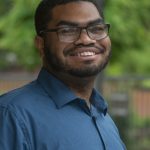