Twisted Pine Will Fill the Amp with a Funky Upbeat Sound 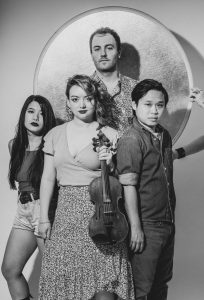 There’s a musical movement in bluegrass in which bands are breaking the mold of the genre’s traditional sound.

The group will perform at 2:30 p.m. Sunday in the Amphitheater, showing off its energetic, funky sound.

Twisted Pine formed in 2014, after lots of “jamming,” Sartori said, in the Cantab Lounge in Cambridge, Massachusetts, a dive bar and music venue. The musicians developed a long-term residency at Cantab.

Sartori joined the band four years ago with his upright bass. He said he started playing the electric bass in middle school, eventually switching to the upright acoustic bass in college, where he first came across the bluegrass scene.

“I really like the bass because it bridges the gap between the groove elements of music and the melodic elements,” Sartori said.

He performed at music gigs with Parks and Bui, bringing their sound to weddings, coffee shops and other venues.

“We all knew each other by being on the Boston music scene,” Sartori said. “And we’ve been playing together for so many years — we know each other’s playing in and out.”

For its Chautauqua performance, the trio will be joined by flute player Anh Phung, a friend of the band’s who will tour with  them for the rest of the summer. It’s the group’s first tour as a trio, after their guitarist left the band.

“We’ve never been a trio before, and so with that comes many creative possibilities,” Sartori said.

The Boston-based band released its self-titled debut album in 2017, and then a follow-up album, Dreams, in 2018. Though they love touring music festivals and other venues, Sartori said the studio is their playground.

Parks, who is also the group’s lead vocalist, approaches the group with ideas for song structures.

“Kathleen is our primary song writer,” Sartori said. “She’ll come to the band either with a fully formed song or a half-formed song, and we’ll fill in the pieces or work on a groove.”

They work together to find their sound with a particular song structure or idea. Statori said their sound centers around progressive bluegrass.

“The common thread between the three of us is the bluegrass tradition that sets the backdrop for everything that we are doing,” Sartori said.

Sartori and his bandmates are looking forward to performing at Chautauqua. They hope the audience enjoys the music, while also being introduced to a new sound.

“Our goal is to try to deliver that music with honest musicality that is not too heavy for anyone listening, (so they) come away feeling that they had a genuine and full musical experience,” he said.