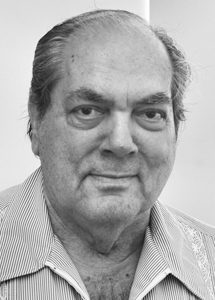 This past June, Spiro Malas — operatic bass, longtime Chautauquan and husband to Marlena Malas, head of the School of Music Voice Program — passed away. After spending decades teaching and performing at Chautauqua, Spiro was a close friend to many School of Music faculty members, students and other Chautauquans. Now, one of those friends — guest faculty Mikael Eliasen — seeks to memorialize him in concert.

At 7:30 p.m. tonight, July 24, in McKnight Hall, seven voice students will sing in a recital put together by Eliasen called “To Spiro, With Love.”

“I knew him really well,” Eliasen said. “I’ve known both Marlena and Spiro for about 35 years. So I felt that I wanted to honor him in my way.”

Each season, Eliasen puts together a themed program to be performed by voice students that he chooses himself after listening to every student in the Voice Program sing. This year, those students are baritone Evan Lazdowski, mezzo-soprano Lucy Evans, baritone Adam Catangui, mezzo-soprano Erin Wagner, tenor Mathieu Levan, baritone Marcel Sokalski and counter-tenor Sam Siegel. Eliasen will not be singing, but he will be playing piano and providing context and explanation for the pieces he chose.

“(While choosing vocalists), I’m looking for something that is maybe very abstract and difficult to put your finger on, but (that) I would call soulful,” Eliasen said, “where somebody maybe is not afraid to be vulnerable — and I think for this particular concert, that’s a very important element.”

In a traditional voice recital, only the vocalists who are performing the piece would be onstage at one time, but for this concert, all the students will remain on stage for the duration of the recital.

“I view it a little bit like a Quaker gathering, where people get up and they sing, and I talk a little and maybe interact with the audience a little,” Eliasen said.

The program consists largely of pieces by American composers such as Leonard Bernstein, George Gershwin and Aaron Copland, and all the pieces are in English. Malas loved to sing in English, Eliasen said, and though usually classically trained vocalists perform many pieces in Italian, German and other languages, there is something uniquely poignant about the students singing in their own language to an audience that also knows that language.

“This way, right from the beginning, the whole concert is about words that everybody understands, which for me is very important in the process of communicating,” Eliasen said. “The biggest difference between a singer and, let’s say, a trombone player is, of course, words.”

Though the recital is dedicated to Malas, it is not a maudlin program, but rather a celebration of the kind of music he liked and a collection of pieces that make Eliasen think of him.

For example, the first piece on the program is “Deep River,” a traditional African American spiritual composed for solo voice by Harry Thacker Burleigh. It is a song about crossing a river and finding peace that Malas loved very much, Eliasen said.

“All the pieces are touching on something emotional,” Eliasen said. “Maybe the theme is that, somewhere, we all have to cross the river, and we all have to find peace somewhere. And maybe … if I were to superimpose something on this concert, it would be, ‘I hope Spiro is somewhere that he has found peace.’ ”

The program also contains pieces from English operas, songs from the 1920s and ’30s and some pieces from West Side Story. It consists of many, very melodic pieces since Malas always loved a good melody, Eliasen said.

Though many of the student vocalists did not know Malas well or at all, Eliasen finds beauty in honoring the memories of the departed with music sung by youth. Much of a vocalist’s repertoire includes pieces that revolve around death, but this recital will instead focus on moments of joy, finding peace and fond memories of a man who was a big presence at Chautauqua.

“He was a generous personality and full of warmth,” Eliasen said. “And I hope that this is what this concert will be honoring.”

Verdict is in: Opera’s ‘Scalia/Ginsburg’ continues run with bipartisan message