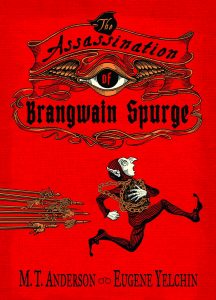 Usually, a book about an attempted assassination would not be suitable for young readers, but for Week Six, it fits right in.

For Week Six, the CLSC Young Readers program has decided to adopt the theme of the week. “What’s Funny? In Partnership with the National Comedy Center” aims to understand the importance of comedy in different mediums, and this week’s Young Readers pick perfectly encapsulates that. The Young Readers program will take place at 12:30 p.m. today, July 31, at the Jessica Trapasso Memorial Pavilion at Children’s School.

The Assassination of Brangwain Spurge, by author M.T. Anderson and illustrator Eugene Yelchin, blends pictures and words to tie together a larger story.

The book covers the adventure of Brangwain Spurge, an elf who is catapulted over to the goblin kingdom with a gem to dissuade the goblin king — the Great Ghohg — from furthering war between the two countries. Spurge’s host, Archivist Werfel, hopes Spurge’s meeting with the king will lead to social discussion and an exchange of cultures.

Instead, Werfel and Spurge become partners and unsuspecting pawns in plots from the goblin and elf kingdoms. Through their efforts to bring peace to the two communities, Werfel and Spurge grow and learn about one another along the way.

With alternating chapters of illustrations from Yelchin and written chapters by Anderson, the book interestingly differs from normal chapter books for young readers; instead of showing one linear story by using illustrations to accompany chapters, solo illustrations offer a different way to perceive the story.

A comic and author based in Brooklyn, Wilbur has also spent previous summers working with Children’s School, as well as teaching college students the art of stand-up comedy. For CLSC Young Readers, Wilbur said he would be drawing on his time in theater and acting for the program.

“I’m hoping to share some of my favorite basic (improv) games with the kids to get them up and moving and trying to tell their own stories after a short discussion of the book they read,” Wilbur said. “Likely, we’ll do some 30-second monologues and an improv game called Freeze Tag.”