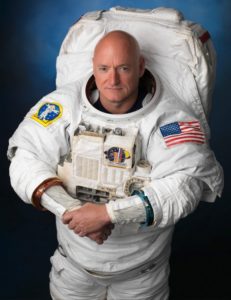 Fifty years ago, nearly to the day, Neil Armstrong became the first human being to step foot on the moon. In the decades since, humanity has set its sights on even greater heights — and today, retired astronaut and U.S. Navy Captain Scott Kelly will talk about how his work has brought our species closer to achieving those lofty dreams.

At 10:45 a.m. Friday, July 19 in the Amphitheater, Kelly, who spent almost a full year in space during his last mission aboard the International Space Station, will speak on his time orbiting Earth and how it affected his body and mind as a conclusion to Week Four, “The New Map of Life: How Longer Lives are Changing the World — In Collaboration with Stanford Center on Longevity.”

“We close the week on longevity — identified as both one of our greatest achievements and one of the greatest challenges of the 21st century — with an exploration of humanity’s future,” said Matt Ewalt, vice president and Emily and Richard Smucker Chair for Education. “We’ve asked Scott Kelly to share insights into his year-long mission in space and how the mission helps us better understand space travel’s effects on the human body. How do the risks to human health and performance inform our journeys into the cosmos, from near-future missions to the moon and Mars, to our missions well beyond?”

Kelly will begin the lecture by discussing, with photo and video accompaniment, his journey and story as an astronaut. He will share stories from his time in space — 520 days in total, including nearly a full year spent on the ISS, from March 27, 2015, to March 2, 2016.

In his 2017 memoir Endurance: A Year in Space, a Lifetime of Discovery, Kelly wrote extensively about his year-long mission, the challenges that came with it and the unique perspective of living in space.

“It’s hard to describe the experience of looking down at the planet,” he wrote in his memoir. “I feel as though I know the Earth in an intimate way most people don’t — the coastline, terrain, mountains, and rivers. … Sometimes when I’m looking out the window it occurs to me that everything that matters to me, every person who has ever lived and died (besides the six of us) is down there.”

There are many things Kelly experienced that can’t be found on Earth, including spacewalks, where his spacesuit was the only thing separating him from the cold vacuum of space; moments spent observing storms, air pollution and auroras from above the atmosphere; and the smell of space — “slightly burned and slightly metallic,” he wrote.

After Kelly’s presentation, he will sit down for an armchair discussion about what he and NASA learned from the research conducted on the ISS and on his own body.

As part of the mission, Kelly participated in the “Twin Study” with his identical twin brother, Mark, who is also a retired astronaut. Mark remained on Earth while Scott went to space, and the differences in their bodies upon Scott’s return helped increase understanding of what space travel does to the human body.

The study, which was published in April, reported that Kelly experienced a shift in fluids in his upper body, some structural changes to his vision, minor genetic changes and DNA damage and thickening of his carotid artery wall. These changes, along with the parts of his body and physiology that remained the same compared to his brother’s, are helping scientists understand how the body is affected in space and, just as important, in what ways it is unaffected.

“Results and scientific papers will continue to emerge over years and decades, based on the four hundred experiments we conducted over the year,” Kelly wrote in Endurance. “We need to see many more astronauts stay in space for longer periods of time before we can draw conclusions about what we experienced.”

Kelly will also discuss the physical and mental challenges of living in space for a year. During that time, Kelly only saw 14 other human beings in person. In Endurance, he wrote that he sometimes felt disconnected from his family on Earth; he missed nature and being submerged in water, he missed gravity and grocery stores, he missed the colors of clouds and doors, he missed rain and many other Earthly comforts.

“In the future, there will be a word for the specific kind of nostalgia we feel for living things,” he wrote.

Still, living in space was an adventure few other humans get to experience, and Kelly wrote that he would miss the thrill of surviving, “the sense that life-threatening challenges could come along and that I will rise to meet them, that every single thing I do is important, that every day could be my last.”

Though Kelly’s time in space is over and the “Twin Study” has been published, he will continue to be a resource of scientific study for the rest of his life, as scientists observe any long-term effects of his stay among the stars.

As the 50th anniversary of man’s first steps on the moon approaches — on Saturday — Kelly will also discuss the impact of his work on future generations of astronauts and how humanity might someday take its first steps on Mars.

“If we want to go to Mars, it will be very, very difficult, it will cost a great deal of money, and it may cost human lives,” Kelly wrote in Endurance. “But I know now that if we decide to do it, we can.”