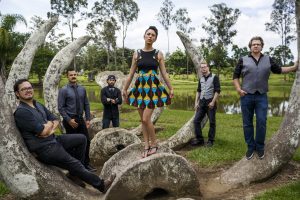 Gina Chavez always knew she was meant to perform; she has always loved singing, and even at age 5 would toddle up to strangers in restaurants and tell them jokes she’d heard from her dad. What she never expected, though, is how much of an impact she would have on people all over the world.

At 8:15 p.m. Monday, August 19 in the Amphitheater, Chavez will bring her Latin-inspired, bilingual, upbeat music to the Chautauqua stage.

“Sonically, we are pretty varied,” said Chavez, a 10-time Austin Music Award winner. “Sound-wise, we do everything from introspective songwriting to indie pop to Latin dance band, and we like to take audiences on a journey — and a journey that takes you from your head to your heart to your hips, and everything in between.”

Chavez has been on plenty of journeys herself, having toured to 14 different countries and all across the United States. As someone who is half-Mexican and a self-described “Catholic lesbian from Texas singing in both English and Spanish,” Chavez has sometimes been wary about how she will be received when she tours, given the charged state of the modern political climate. However, whether she sings and plays in a big city or a small town, she has found people everywhere who relate to her, her story and how she is openly herself.

She fondly recalls, for example, a married couple who told her they were the only lesbians for the next 50 miles, and a boy who had written on his phone, too nervous to even say it aloud, “I’m gay, too.”

“I’ve been so heartened … to play these shows and to have people come up to me and say, ‘Thank you,’ ” Chavez said. “ ‘Thank you for bringing diversity to our community, thank you for sharing who you are, thank you for giving us a place to be different.’ ”

A native of Austin, Texas, Chavez grew up not knowing much about her Mexican heritage, and Spanish was not her first language. It was not until a study abroad trip to Argentina that she began to take a deeper interest in Latin music and began performing it. When she started singing in Spanish, she found that it was like unlocking another part of herself.

“Sometimes I love singing in Spanish because … it’s almost like, more than thinking about what I’m saying, I think I’m feeling it — I’m emoting it,” Chavez said. “There’s something just so much more visceral about the Spanish language.”

There are many different types of Latin music — Chavez’s style is a fusion of many, with an especially strong Afro-Cuban influence.

“There’s something about (it) that makes you want to throw everything aside and join people dancing, and just let loose a little bit,” Chavez said.

Chavez will perform at Chautauqua during a week themed “Exploring Race and Culture with Wynton Marsalis and Jazz at Lincoln Center.” The messages in Chavez’s music speak to this theme a great deal — especially in that Chavez finds the differences between races and cultures to be not so different after all. Everywhere she has traveled, people have been much the same on the most basic levels: the same desires, the same needs, the same struggles.

“We’re struggling so much right now with ‘different,’ ” Chavez said. “We’re all the same in our hearts, where it matters. People are people everywhere.”

In an America where the immigration debate, in particular, still rages on, Chavez finds this message to be more relevant than ever.

“On stage, I don’t get up and preach, but I do want to spread a message that you being able to be you matters, just as it matters for your neighbor to be able to be him or herself,” Chavez said.

Most importantly, Chavez hopes the Chautauquans will have a good time; she puts her all into every concert she does, whether the house is packed or the audience is small, and hopes the experience she and her band create is a fun one. Chavez aims to bring light to audience members’ hearts, and perhaps give them a slightly different way to look at the world.

“The best thing we can do for the world is live our hearts and be human to each other,” she said. “Music, for me, is a way to reach people. Music is a vehicle, and it’s one of the most important vehicles we have.”