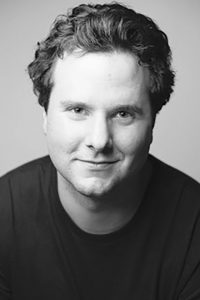 Brightwell wears many hats during the CTC summer season. Early in the summer, he participated in the Young Playwrights Project, acting out a variety of works written by local students. He also played Nick Bottom in the traveling production of A Midsummer Night’s Dream, and currently plays Alfie in One Man, Two Guvnors.

Brightwell said the motion and energy of One Man, Two Guvnors has kept him on his toes in the best possible way.

“I love the insane, comic energy of it,” Brightwell said. “There is so much physical comedy and so much joy to the show. I think the audience will be sitting forward in their seats a lot, because I know I would be. It’s an absolute blast.”

According to Brightwell, working with his fellow “mechanicals” in A Midsummer Night’s Dream has been his favorite part of the season because of how goofy, relaxed and funny the group was onstage.

Where he’s from: Originally from West Virginia, Brightwell grew up in North Carolina before settling in Minneapolis for a few years. He’s now preparing to enter his third year at Case Western Reserve University/Cleveland Play House, pursuing his MFA in acting.

Brightwell said he didn’t get into acting until his freshman year of high school.

“I was an extremely shy kid,” he said.

Motivated by a desire to break out of his shell, Brightwell signed up for a theater class and fell in love.

“It opened up a new world for me,” Brightwell said. “I just couldn’t stop. I can’t imagine myself doing anything else.”

Brightwell is returning to Chautauqua for his second season. He leapt at the opportunity to come last year, and said he was just as eager to come back for round two.

“I love this place,” Brightwell said. “I love the people, too. It’s a magical place to spend your summer.”

Favorite theater memory: Last fall, his role as Constantine in The Seagull is a standout. On stage, he got to throw water at a fellow actor and be doused in return, and he said that the unique, soggy experience was a lot of fun.

“It was just so much fun to do,” Brightwell said. “And then I had to cry right afterwards, so it was quite the gamut of things to do on stage.”

What he’s reading: The Nix by Nathan Hill.

It’s the story of a son reconnecting with his mother and struggling to sort out what parts of his perception of her are true, and which are fiction. It cuts back and forth in time, and leads audiences on a journey through the ghosts of these characters’ pasts.

“But it’s also so, so funny,” Brightwell said. “I highly recommend it.”

What he’s watching: “Years and Years.”

The show follows a powerful politician in Britain over the course of around 15 years, as well as the struggles of an average family trying to go about their lives within the raging political landscape.

Favorite part of the Chautauqua community: The open-minded, intellectual atmosphere.

“I love that people are willing to have really interesting, sometimes difficult conversations about things,” Brightwell said. “Everyone is so engaged and willing to learn and grow. The people here are consistently warm, welcoming and ready to talk.”

Dream vacation: A warm beach in the middle of the Caribbean.

“I just want to lay in the sun with a mojito in my hand and a good book at my side,” Brightwell said. “Of course, I’d love to go to Europe and all those other dream destinations, but right now, that beach is really calling my name.”

What’s next: In the short term, he’ll be working on several projects at Cleveland Play House and finishing his graduate program there.

In the long term, he hopes to head to the New York City area to work as an actor. He’s only ever done theater acting, but said that he’s completely open to working in film and television if opportunities come his way.