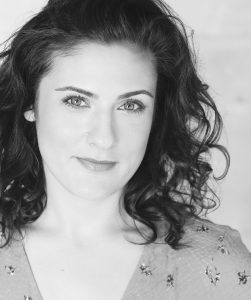 Deroian has stayed busy throughout the entire season. She kicked the summer off by performing in the Young Playwrights Project alongside her fellow conservatory members, taking on a multitude of roles in shows written by local elementary school students. She also performed as Peter Quince and the fairy Mustardseed in A Midsummer Night’s Dream, and is currently playing Dolly in One Man, Two Guvnors.

Deroian said working with her fellow conservatory members has been the highlight of her experience this season.

“Getting to work with these people that I’m growing to love is amazing,” Deroian said. “We’re building great bonds, and these are some incredible people to share a summer with.”

For One Man, Two Guvnors specifically, Deroian said despite the comical nature of the production, working on the show has required a high level of focus and attention.

“With comedy, I think people think that, ‘Oh, you’re just having fun,’ ” Deroian said. “But it’s really about being precise. That’s where a lot of comedy comes from; the precision and the timing. Once that foundation is built, then you can start having fun and playing with it.”

Where she’s from: The Central Valley of California. She stayed in California to attend college, and just graduated from the University of California, Irvine with her MFA in acting.

Around the age of 4 or 5, Deroian started acting in her elementary school’s plays. Her involvement in theater stopped momentarily when she started playing sports as a teenager at her mother’s request.

“I hated it,” Deroian said.

She eventually decided to re-engage with theater and auditioned for one of her high school’s plays.

“After that, I just kept doing it,” Deroian said. “And here we are.”

She came to Chautauqua after hearing about the program through CTC Artistic Director Andrew Borba. Borba teaches at UCI, and Deroian said she had heard nothing but good things about the summer program at Chautauqua. After auditioning and making the cut, she made her way across the United States to the shores of Chautauqua Lake.

Favorite theater memory: Maybe not her “favorite” memory, but one that stands out nonetheless, is a time when Deroian had to play a villian.

“And it wasn’t a cartoon villain,” Deroian said. “She was abusive; she beat people up. She was a sadist. And that was a really hard role for me. But in the end, I was really proud that I was able to get there.”

Deroian said she is grateful for the experience, even though it was a difficult one, because it let her know she was able to challenge and push herself, and succeed even while being uncomfortable.

“That being said, I don’t think I ever want to do something like that again,” Deroian said.

Deorian is Armenian herself, and said she’s always enjoyed the food, even when she was young.

In particular, she enjoys chicken kebabs with a bulgur pilaf — a wheat-based pilaf instead of a rice-based one — as well as the tomato-based, meatball stew called bamia.

What she’s watching: She just finished “Chernobyl” on HBO.

“It was amazing, but also so hard to watch,” Deroian said.

Deroian said that while the cinematography and storytelling in the series are top-notch, it was difficult to sit through the depictions of strife and sickness inherent to the Chernobyl story.

“The title is pretty self-explanatory,” Deroian said. “In truth, it’s about how, as a female, I shouldn’t have to apologize for every little thing, unless I’ve actually offended you. Then, of course I’d apologize, just like everyone would.”

Dream vacation: Backpacking through Europe, with an emphasis on stopping in Italy.

“For the food,” Deroian said. “Of course. What better place to go for great food?”

What’s next: Almost as soon as she’s done with this season at Chautauqua, she plans to move to New York City. In the city, she hopes to act as much as possible, and aims to work in television.

“I don’t think people think New York is as good of a scene for film and television as it is,” Deroian said. “A lot of people I know will say, ‘No way, New York is growing.’ And I also love the option to still do theater, and New York is a fantastic place for that.”