“I can’t go and do likewise because it is against the law,” said Miguel A. De La Torre at the 9:15 a.m. Monday Ecumenical Service in the Amphitheater. “This is the only country in the world where providing humanitarian aid is against the law. It is against the law, and I can be detained by the border patrol if I go into the desert and take in those who are dying of thirst. I could get up to 20 years if convicted. My friend Scott Waring is facing that now.”

De La Torre’s sermon title was “Meeting Jesus in the Wilderness,” and the Scripture reading was Luke 10:29-37, the parable of the Good Samaritan.

Gloria Anzaldúa said, “The U.S-Mexican border es una herida abierta (an open wound) where the Third World grates against the first and bleeds.”

“Why are Latinx people here?” De La Torre asked the congregation. “If you understand the story, they would say: ‘We did not cross the border, the border crossed us.’ ”

The reason was, he said, “the religious ideology of manifest destiny — the belief that this continent was given to the white race, forgetting about the indigenous people or the people from Spain or other countries who were here.”

When James K. Polk ran for president, he promised he would invade Mexico. John Quincy Adams, who was then in Congress, said that he “feared the banner of our nation would become the banner of tyranny.”

Ulysses S. Grant wrote in his autobiography that, just as God punished people for their individual sins, God punished the United States with the Civil War as punishment for the Mexican War.

“What came with this invasion?” De La Torre asked. “The gold of California, the silver of Nevada, the copper of New Mexico and the oil of Texas. The United States became an empire because of the stolen resources of Northern Mexico — not, as you call it, the American Southwest.”

He continued, “The United States found that it was more profitable to obtain economies rather than land, and turned to gunboard diplomacy, sending in United States Marines to protect American business interests.”

He used his own birth country, Cuba, as an example. Cuba had been fighting for its independence from Spain for 30 years before Teddy Roosevelt rode up San Juan Hill. Spain was on the verge of surrendering, but the United States got involved — even though it had not been invited.

“On the day of liberation, the flag of colonialist Spain came down, but those who had fought for the revolution were not allowed into Santiago Harbor,” De La Torre said. “They saw the United States flag go up. The war for independence became a war of two empires.”

Within a few years, people from the United States owned most of the rural land. The sugar and tobacco was shipped by U.S.-owned trains to U.S.-owned ships and transported to Baltimore.

“The sugar came back as candy, the leather came back as shoes and the rum came back as drunken sailors,” he said. “The Platt Amendment allowed the U.S. to interfere whenever it looked like Cuba could not govern itself.”

The United States could expropriate land for military use.

“Hence, Guantanamo Bay,” De La Torre said. “Every U.S. nickel before 1958 is made from Cuban mines. The U.S. has militarily invaded Caribbean countries 21 times, and sent in CIA covert operations 26 times. That is one regime change every two years for the past 100 years.”

De La Torre said that the World Bank and NAFTA are no friends of the poor. The United States subsidizes corn under the NAFTA treaty, but Mexico was forbidden to, so Mexican farmers lost their land.

“Where did they go? To the maquiadores to earn $5 a day,” De La Torre said. “They look across the border at Burger King and see a pimply faced teenager who makes more than that per hour.”

Operation Gatekeeper was initiated to make immigration so horrible it would deter people, according to De La Torre.

“It was enacted in 1993 by a liberal president, and that is why we put children in cages today,” he said. “Both liberals and conservatives want to maintain empire, rather than do justice.”

At least five brown bodies are found every day in the desert. Operation Gatekeeper is a human rights policy designed to kill, he said.

“If you are looking for an answer as to why people did not respond to and prevent the Holocaust, Jim Crow and slavery, you have your answer,” De La Torre said.

Good Christians are supposed to show hospitality to strangers.

“Hospitality assumes you own the house, and you can proclaim that all are welcome,” he said. “But my cheap labor and stolen resources built the house you are singing about.”

He continued, “The empire builds roads to steal raw materials and cheap labor and then complains that immigrants use the same roads to come here. You took my sugar, my tobacco and my rum, the three necessities of life. I don’t want your hospitality; I want my damn house back.”

The Rt. Rev. V. Gene Robinson, vice president of religion and senior pastor, presided. The Rev. Susan McKee, a fourth-generation Chautauquan, volunteer for the Chautauqua Annual Fund, leader of Chautauqua Knits for Peace and a United Church of Christ pastor in Denver, read the Scripture. The introit was “All Are Welcome,” by Marty Haugen, sung by the Motet Choir. The anthem was “Come, You Have My Father’s Blessing,” by Walter Pelz, also sung by the choir. Jared Jacobsen, organist and coordinator of worship and sacred music, directed the choir. Thanks to the magic of Chautauqua and the generosity of several individuals, there are braille service books and hymnals for the use by the sight-impaired at the weekday worship services. They are available at Gate 4, the Ralph C. Sheldon Foundation Gate. Ask any usher for assistance. The Daney-Holden Chaplaincy Fund and the John William Tyrrell Endowment for Religion provide support for this week’s services. 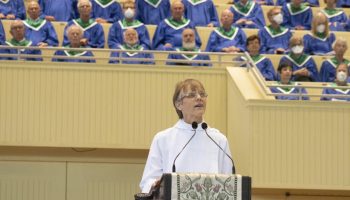 ‘There are other forces at work,’ Budde says; accept, transform 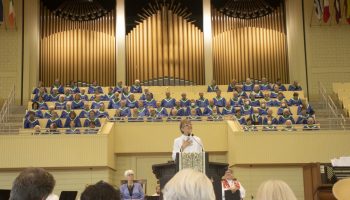