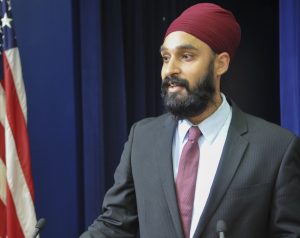 “Everything is equally divine and sacred and beautiful,” said Singh, an author, activist and senior fellow at the Sikh Coalition. “This idea — that evil doesn’t exist — is a really tough thing to put into practice in today’s world. It’s been something that I’ve tried to negotiate my whole life. It’s especially tough now when you have such public hate and bigotry, and intentional harm being done to people.”

One of the things that’s helped Singh view the world through this lens is to try to find the humanity within people.

“To be beyond hate, racism and oppression, even when it’s directed at me and my family — this is a powerful way to help counter prejudices that people have against me,” he said.

At 2 p.m. Friday, August 16 in the Hall of Philosophy, Singh will lead the penultimate Interfaith Friday lecture of the season. Singh will be discussing the existence of evil in the world from a Sikh perspective, and will be joined in conversation by the Rt. Rev. V. Gene Robinson, Chautauqua’s vice president of religion and senior pastor.

“I had always felt a tension, growing up, between the cultural assumption about the existence of evil and my own way of looking at the world,” Singh said. “The two didn’t really fit together. My parents always taught me that God is in everything and everyone — that was the first thing I ever learned.”

Because of his upbringing, the existence of evil didn’t make sense to Singh, who said that it “felt really liberating to have the opportunity to learn how to question those assumptions and to reconcile something that had seemed incoherent.”

Singh’s career as an activist and author on the subjects of diversity, race and religion began in the aftermath of 9/11.

“I was in high school when 9/11 happened, and I saw the racist backlash sweeping around the country and felt compelled to try and serve the communities who were being affected,” he said. “As things have gotten worse, my commitment to antiracism has only increased.”

Singh has also written about issues in the United States concerning the view that a person or group of people are inherently different from oneself, otherwise known as “othering.”

“Our othering experience is primarily through racialization,” he said. “Sikhs have a distinct physical identity, that, in the U.S., primarily gets seen through the lens of violence and terrorism.”

The experience of being othered, according to Singh, makes it difficult for Sikhs to answer the question, “How do we not fall into the trap of othering the people around us?”

Singh wants Chautauquans to come away with — at the very least — a better understanding of the existence of Sikh culture in the United States.

“We are equally human and deserve the same respect that everyone else does,” he said. “I would love for people to sincerely consider the things that Sikh wisdom has to offer. There are some real gems it could give to society right now, especially when it comes to respect, justice and basic dignity.”

Nature and Faith: Anjali Sachdeva to Present Prize-Winning ‘Names They Used for God’