Something fantastic is coming out of the School of Music Voice Program — or rather, something Fantastick.

In one of the last few performances of the Voice Program’s season, students will premiere their production of Tom Jones’ musical The Fantasticks at 6 p.m. Wednesday, August 7 in McKnight Hall.

The Fantasticks, which first premiered in 1960 and ran off-Broadway for 42 years, is the story of two feuding families, and a young man and woman from each side who fall in love. However, this is no ordinary Romeo and Juliet tale; in this case, the feud is actually manufactured by the two lovers’ fathers, who are actually good friends, in order to get the two together.

The Voice Program puts on one musical every season; generally, they are unique departures from the operatic and classical music that students sing in most of their other performances and recitals.

The music in the show is in the style of classic show tunes from the Golden Age of musical theater. A small ensemble of instrumental students will be playing the score.

Along with the two lovers and their fathers, the cast also includes a narrator who doubles as the character El Gallo, and a character called The Mute, who is also a wall that stands between the property of the two families. The Mute is aptly named, as he does not speak or sing a single word during the entire show.

This presents a special challenge to Sebastian Armendariz, who plays The Mute, because he must rely almost exclusively on his physicality to convey his thoughts, emotions and character. As a voice student, the physical aspect of a role is not one he usually considers, but has found playing The Mute to be an enlightening experience.

“I want to make my living and my career off of singing, and it’s a really telling exercise for me,” Armendariz said. “What can you do if you take away your voice? And it turns out, I can do a lot, which is really fun.”

The other students cast in the show are Elio Bucky, Luke Sutliff, Jared Werlein, Merissa Beddows and Adam Catangui.

The show takes some inspiration from Shakespeare — while the two lovers are akin in some ways to Romeo and Juliet, having a person play a wall is a reference to A Midsummer Night’s Dream.

The musical is meta; several of the characters are aware that they are in a play, and due to the story’s almost-cyclical nature, they seem to know that they have done it all many times before — they know what is going to happen before the other characters do. In some ways, The Fantasticks is a theater piece about theater pieces.

“This story, this piece of work, really explores metaphor, and what are the logical conclusions of metaphor — how does metaphor function, how far can we push metaphor?” Armendariz said. “It really asks deep questions of us. How do we handle our past? How do we handle love and heartbreak? And how do we confront the fact that metaphors can only go so far, and that eventually the lived experience is maybe the most valuable?”

Though the cast is small and the set is minimal, this musical explores those thought-provoking questions and more.

The show will have two performances: one tonight, and another Thursday, also at 6 p.m. in McKnight. Seating is limited for both shows.

“If you’re a fan of theater or musical theater, or have even seen the show before, I think you’re going to have a fantastic time,” Armendariz said. “At the same time, if you’re someone who is completely new to theater, and you’re curious enough, I think it will still grip you. I think the story and the characters and the music will still entertain and ignite curiosity.” 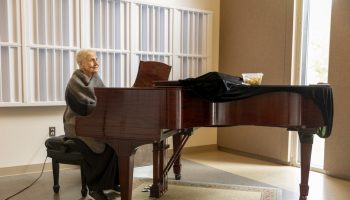