“Mary Magdalene came to the tomb while it was still dark because the Light that had come into the world had gone out,” said the Rev. Barbara K. Lundblad at the 9:15 a.m. Thursday Ecumenical Service in the Amphitheater.

The sermon title was “Grace: And Still I Rise,” and the Scripture reading was John 1-2; 11-18. The liturgical year theme was Easter.

As she was weeping, Mary Magdalene went into the tomb and saw two angels. They asked, “Why are you weeping?”

“She treated them like two hospital orderlies changing a bed where you expect to visit a person,” Lundblad said. “Mary said to them, ‘They have taken his body, and I don’t know where they put it.’ ”

Mary turned around, looked out and saw Jesus, but mistook him for the gardener. He asked her, “Why are you weeping?” She said, “If you have taken him away, tell me where you laid him and I will take him away.”

Jesus said to her, “Mary,” and she recognized him.

“It couldn’t be,” Lundblad said. “She had seen him die and heard him say, ‘It is finished.’ Whatever that meant theologically, for Mary it meant that faith was finished. It is one thing to believe in the birth of a baby; it is quite another to believe in rising from the dead. There are many stories in the Bible that we’re sure were certain, but now that we have grown up, they seem preposterous.”

Mary called Jesus “ ‘Rabboni,’ because she knew him as her teacher,” Lundblad said.

“She was the first rabbinical student of the risen Jesus,” she said. “So why did the church turn her into a prostitute — redeemed, but a prostitute?”

Lundblad said there is not one verse in the Bible that says she was a prostitute. Her biography was merged with two other women.

“Pope Gregory I gathered all the traditions and began with Mary Magdalene and joined her with Mary of Bethany, sister of Lazarus, who wiped Jesus’ feet with her hair,” Lundblad said. “Then they put those two together with the woman in Luke 7 who wept on Jesus’ feet and wiped them with her hair.”

All these women had long hair, and Mary Magdalene is often pictured dressed in red.

“She is not either of those other women; she is herself,” Lundblad said.

Scripture says that Jesus cured Mary Magdalene of seven demons and that she was an important follower of Jesus, one of the women who provided funds for Jesus’ ministry.

“It is clear that Mary Magdalene was so important that she could not be deleted,” Lundblad said. “She is in all four accounts of the empty tomb and always named first. She was the first resurrection preacher. So why did the church turn her into a prostitute? To discredit sexuality in general, and disempower women, in particular.”

Mary reached out to touch Jesus, and he told her not to touch him.

“We all think this is a warning about sex because we have heard (Andrew Lloyd Webber’s), ‘I don’t know how to love him,’ ” Lundblad said. “But all of the disciples wanted Jesus to stay.”

Jesus said that he would “be with you and the not-yet born, those who are dying and those who want to know what it means to live,” Lundblad said.

“He will be with us from a cave carved in rock, or from a cleft in a rock where you can see a glimpse of God,” she said.

Mary Magdalene told the disciples, “I have seen the Lord,” and became the first resurrection preacher.

“I can see her hanging out with Maya Angelou,” Lundblad said. “(Angelou’s) poem, ‘Still I Rise,’ is about generational trauma and how it affects the descendants of slaves, how it is passed on and grips the lives of people.”

Lundblad attended an art exhibition that featured work by Native American women. They too said that they experienced generational trauma, but also generational resilience.

“Mary Magdalene had that generational resilience; Maya Angelou had it,” Lundblad said. “Mary Magdalene would echo it because of what the church has done to her, and for those who are trying to bring her back.”

Lundblad quoted these lines from “Still I Rise”:

“Maya believed in resurrection more than history,” Lundblad said. “Jesus might have picked up on the rhythm and rhyme.”

The Rev. Scott Maxwell presided. Bud Brown, a retired college librarian living in Avondale, Georgia, read the Scripture. Brown and his wife, Pat, served as hosts of the Baptist House from 2007 to 2015. Barbara Hois, flute, Debbie Grohman, clarinet, and Willie LaFavor, piano, played Concertino in C Major, Op. 101, by Caspar Kummer, for the prelude. The Motet Choir sang “Blow the Trumpet in Zion,” by John Ness Beck, and for the anthem, they sang “With a Voice of Singing,” by Martin Shaw. Jared Jacobsen, organist and coordinator of worship and sacred music, directed the choir. Thanks to the magic of Chautauqua and a few generous souls who connected here, braille worship service books and hymnals are now available for those who are sight-impaired to participate fully in the weekday worship services. These worship books will be available at Gate 4, the Ralph C. Sheldon Foundation Gate. Please ask any usher for assistance. The Robert D. Campbell Memorial Chaplaincy provides support for this week’s services. 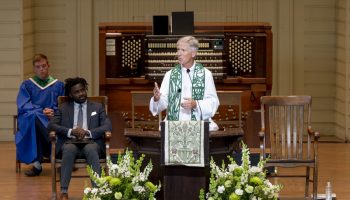 Jesus unbinds us from tragedy to walk away from what holds us back, says Robert W. Henderson 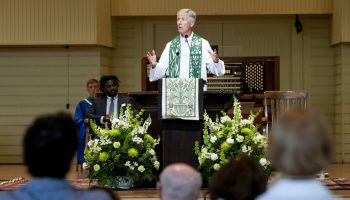 Robert W. Henderson asks: Do you trust the person at the controls as you step out in faith?