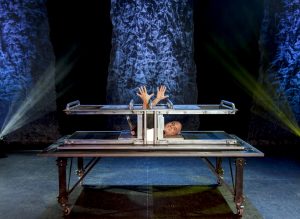 A magician never reveals his secrets, but for Bill Blagg, the reason magic continues to interest and engage audiences isn’t a secret at all.

“It’s the fascination of the impossible,” Blagg said. “Magic is something that everyone experiences at some point in their lives. When people see it, they either say, ‘Oh, how did you do that?’ or they don’t even care; they’re just fascinated by the impossibility of it.”

Blagg, an entertainer and acclaimed illusionist, will be bringing his mystifying magic to Chautauqua at 7:30 p.m. Wednesday, August 14 on the Amphitheater stage, as part of the Family Entertainment Series.

Performing at Chautauqua will be an experience unlike any of his previous performances, Blagg said.

The unique setup of the Amp means Blagg will be creating and presenting a show that is fundamentally different than the performances he gives in theaters and showrooms.

Blagg said the unique opportunity is one he’s looking forward to.

“Bringing magic into this type of venue is going to be a new experience for us,” Blagg said. “We’ll be creating a custom performance, so to speak, for Chautauqua.”

Within that custom performance, Blagg plans to astound and amaze audience members with a variety of illusions. From making members of the crowd levitate to reading their minds onstage, to shrinking himself down to 6 inches tall, Blagg said there will be something for everyone to enjoy.

For those hesitant to attend and experience a traditional magic show, Blagg said there’s nothing to worry about. According to Blagg, the show is different from the standard razzle-dazzle of most magic performances. It is highly interactive and forges a unique connection between audience and performer, Blagg said.

“No two shows are the same,” Blagg said. “We’re not the typical, standard magic show. It’s more of an interactive experience that feeds off of the audience and magic actually happens to people in the audience. I walk away feeling like I’ve formed a bond and a friendship with audience members, and that’s what makes it really unique.”

Throughout his time as a performer, Blagg has pulled off hundreds of successful illusions and delighted thousands of engaged audiences. But despite his extensive history in the industry, Blagg said the thrill never gets old.

“What I look forward to most is just thinking, ‘What new things will tonight bring?’ ” he said.