As the 2019 season comes to a close, for four trustees, this marks the end of an era. Don Boswell, Carolyn Byham, Bonnie Gwin and John Milos are rolling off their term-limited positions on the Chautauqua Institution Board of Trustees.

Boswell is the president and CEO of a public broadcasting organization, operating television and radio stations in Buffalo; Byham is the executive vice president of Development Dimensions International and a Pittsburgh arts supporter; Gwin works in CEO and Board succession planning across all industries; and Milos is the retired president and previous owner of a truck and SUV accessory mail-order internet company. Three were able to join the Daily for the second-to-last Chautauqua Conversations of the season.

Between the four is a combined 32 years of service to the Institution and over 100 years coming to the grounds. While their terms may end in the fall, they each said they will forever be lifelong Chautauquans.

How has your last season on the board been so far?

Milos: The last year is always kind of interesting because as you transition off the board, a lot of your committee assignments are winding down because they are trying to bring the newer board members up to speed and get them involved. But it’s actually been the least busy. I’ve had the distinct pleasure of being involved in a lot of events that the board had to deal with over the last eight years — we’ve been a pretty busy board — and this last year has been relatively quiet.

Gwin: Bittersweet because I’m going to miss being on the board. It’s been such a great experience, but the work we get to do at every board meeting is really important and interesting, so it’s been a great year.

Boswell: I love being on the board. … Overall, my experience, my passion, my love for Chautauqua hasn’t declined in any way.

When you reflect on your tenure, what sticks out to you?

Milos: I was, along with a number of other board members, active in the Amphitheater reconstruction and in fact, involved in it even before I got on the board. That was a really significant project, as you can imagine, and there was a lot of controversy surrounding it, so it was a continuous process of helping everybody in the community understand what we were trying to accomplish. Finding a new president — that happened under our watch — and a number of other projects.

Gwin: Obviously the Amp and making sure we brought the community together to do that, which was important to get it right. I think the strategic plan that we’re unveiling now has been really, incredibly critical, and then selecting President Michael E. Hill to succeed Tom Becker, who was amazing, and Michael has been amazing — each in very different ways.

Boswell: I really pushed to have the program that aired nationally on PBS get done. It was met with a lot of good reviews. At least in some of the circle of people that I know, they found it informative — they didn’t really know much about Chautauqua. A number of colleagues at different stations said they were reflecting on information, (that) they had to pass it on, things about locations and the season. So for me, it was being able to show a program that, in a lot of ways, raised visibility for Chautauqua, and I think we need a lot more of those opportunities.

How have you seen the Institution change since joining the board?

Milos: Certainly the biggest change has been the president of the Institution. … I think the Institution is at a point where it needs to move in a different direction, and President Michael E. Hill is exactly the right person — he has a vision, has ideas of what could be, and it’s very exciting to see that. On the other hand, I think that for eight years the board and Tom Becker, who was the president for most of that time, set up a sustainable Institution — financially and administratively. The Institution, in a lot of ways, was in outstanding shape and in a position to do the things that were forward-thinking and visionary. … That was pretty powerful.

Gwin: For an Institution that’s almost 150 years old, it’s always been evolving, and that’s been true over the last eight years — and probably pretty dramatically because lifestyles have changed. People used to come for the full season when wives didn’t work and they could come and bring their kids all season. How people come to Chautauqua has changed, who comes has changed some, and when you look at the strategic plan, I think about my kids — and their kids. What should this place be? Continuing to think about how we need to evolve to meet future generations — that to me has been the most important thing. … It’s important that this place welcome all those people and that we evolve, but we don’t forget that this is a community; it’s not just for one type of person.

Boswell: From at least my perspective, I think the PBS audience is the Chautauqua audience. I could go through a number of NPR and PBS stars who appeal to that demographic and our audience, and I think we could make some connections by further enhancing that exposure. I think some of our celebrity stars or writers, producers strengthen the themed weeks with their contacts and their ability to draw people to Chautauqua. I don’t want it all to be about PBS and NPR, but I do feel in targeting our audience and our celebrities and our themes (at PBS), are in some ways nicely aligned to the mission and themes (at Chautauqua), and can only further enhance greater opportunities for us.

What are your hopes for the board and the Institution going forward?

Milos: I think the biggest thing is that when you start looking at all the exciting things that we are talking about and planning to do, we need to make sure we remember how we got here and that there were a lot of disciplines that were put in place to create a very sustainable Institution. In the excitement of moving to the new, it’s easy to forget about what got you there in the first place. My hope is that the board continues to look backwards and rely on some of the lessons we’ve had over the years and … learn from them.

Gwin: I hope going forward that the Institution stays true to its mission and the things that make Chautauqua, Chautauqua. So I hope that stays the same — the core heart of what we are. But I also think that as we look forward, we have to be more diverse and more inclusive, and I think we’re getting there. I think we have to make sure housing is affordable and that there are lots of options for people, thinking about how we preserve the incredible buildings like the hotel, more food options and also just evolving recreationally and programmatically. But I hope what brought me here 25 years ago, stays the same.

Boswell: I think part of it is staying the course, but you’ve got to take risks. Don’t be afraid of challenging yourselves, management and the community to look at things differently, because clearly we’re a more global universe now — many faces, many voices — and hopefully our board, management and our community have to look to where those new voices and faces are to tell their stories. Not everything is going to be what you expect, but again, you can’t make progress if you don’t sacrifice and take those risks and hopefully they turn into opportunities.

What’s next for you?

Milos: Enjoying the summer season at Chautauqua. When you’re on a board, it’s pretty amazing how much time you end up putting into board-related activities. And while I said earlier, it’s an absolute pleasure to do that, particularly working with such talented people and people that become such good friends, the other side of it is that you end up missing a lot of what is going on. So I’m looking forward to having a little bit more control over my schedule, but I know I’m going to miss being on the inside of what’s going on and helping steer the direction of the Institution.

Gwin: I’m going to be a committed Chautauquan; I’ll still be involved any way that I can because it’s such a great place. I’m on my alma mater board, so I’ll be busy with that, and I work and travel like a crazy person, so I’ll continue to be doing that. The thing I’m going to miss the most — apart from what I hope has been, in some small way, helping Chautauqua be Chautauqua — are the friends that I’ve made on the board because the people on the board are just amazing. It’s such a great community of people.

Boswell: I’ll always act like I’m on the board. I will be involved in the ways that I can, even though I won’t be an official board member. … I don’t feel like I’m rolling off the board, I feel like I’ve rolled into greater experiences, understanding the culture and the mission, and I feel the board experience only gives me more to try to do more.

MIT’s Joi Ito to Talk Importance of Humanities in Tech 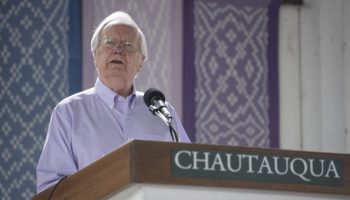 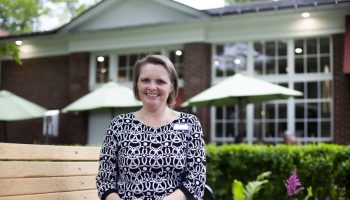 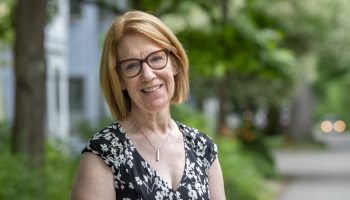