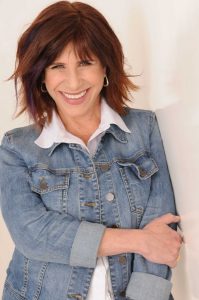 There’s a morning lecturer in the Amphitheater wowing the audience and leaving them with a message so memorable that many Chautauquans will take it to heart, and even take action.

When this occurs, here’s something to ponder: Has the speaker been professionally trained by comedian, public speaking guru, NPR “All Things Considered” commentator, podcaster and best-selling author Judy Carter?

It’s happened here before, when Dalia Mogahed spoke at the Institution in 2013, and it will happen again — because Carter has the character, competence and charisma to transform good talks into great presentations.

She also possesses the ability to coax people’s sense of humor and inner strength out of lethargy and despair. Ripple effects come from helping others turn their lives around. Often they, in turn, inspire the people around them.

At 2 p.m. Saturday, Carter herself will grace the Hall of Philosophy podium as the Chautauqua Women’s Club’s Week Six Contemporary Issues Forum speaker. Her talk is titled: “Stress IS a Laughing Matter: The Power of Turning Problems into Punchlines.”

The “What’s Funny?” Amp speakers may have left the grounds, but at least one outstanding comedian remains.

“I have learned that I look at life as material, and certainly life is so stressful right now with our political divisions and … shootings, and the Kardashians are procreating, and (there’s) so much bad, that I’m here at Chautauqua to show people the trade secrets of comedians,” Carter said. “I’m going to show (Chautauquans) that even if they’re humor-impaired, they can lighten up.”

In part, Carter’s insight and wit come from having surmounted more than her share of challenges.

“I grew up with a severe speech impediment (that was) so bad I couldn’t even say that word, ‘impediment,’ ” she said. “I grew up in a very unfunny house, in a Jewish family in Los Angeles. There was so much yelling and screaming we had a wailing wall in our living room. My sister was severely disabled. … So I had to be funny. What else was I to do, right?”

Carter’s older sister, Marsha, had cerebral palsy so severe that she was quadriplegic.

“It was painful,” Carter said. “It was very painful because (Marsha) was given away at 8, and she then reduced herself to one word: ‘home, home.’ And she’d say that over and over, and it became my life’s work to find her a home — and in California they institutionalize, so she was institutionalized. … At this point she was tube fed … and incontinent. But I did find her a home.”

As an 8-year-old, Carter went to the public library and Joe Berg’s Magic Store in Los Angeles for books on magic tricks. Practicing the patter that was recommended for performing these tricks improved her speech, and her proficiency at magic got her gigs.

In elementary school, Carter morphed into “Magica the Magician” at children’s birthday parties. She and P.G. Rognow, her assistant, presented three to four shows a weekend and put on a backyard benefit that raised more that $500 for Cedars-Sinai Medical Center.

During college at California State University, Northridge, and the University of Southern California, where she earned her Bachelor of Arts in theatrical arts, Carter performed magic as “Judiwitch” at birthday and fraternity parties.

During the early 1970s, she studied with the Canadian magician, Dai Vernon, known for his sleight of hand technique. Carter and Tina Lenert, a mime and magician, formed an act

“I started as a magician,” Carter said. “I was the first woman to ever perform at The Magic Castle in Los Angeles, and I was kicked out. Thrown out. That was my school of hard knocks. I was actually lifted up and taken to the parking lot … because they said, ‘Women don’t belong here.’ ”

Along the way, Carter’s magic and tricks became more elaborate and involved.

“I toured the whole country,” she said. “I played Teddy Roosevelt in the Badlands, where they said, ‘Can you work Teddy Roosevelt into your act?’ ‘Sure.’ That’s when I was following Mr. Boodles and his Dancing Poodles.”

Then one day in Chicago, her trick materials didn’t show up.

She said her first joke came from her show at the last of the Playboy Clubs.

“I was in the Bunny Room crying on this Bunny’s breast — although she said she was a feminist, this Bunny,” Carter said. “She said, ‘Don’t call us bunnies, we’re rabbits.’ And then I went, ‘Well that’s what I’ll open with. … And that was my first joke. And then I became a comic and let go of the tricks.”

In 1984 — five years after switching to stand-up — Carter created Comedy Workshop Productions at Igby’s Comedy Cabaret. Carter’s were the first comedy classes offered in Los Angeles. She began focusing on humor for corporate events and the workplace in 1989.

Carter toured extensively as a headlining comic. She said she opened for Prince and many others, and performed in hundreds of television shows.

“After 17 years of (headlining) — it’s a rather lonely life for a single woman on the road — I quit and I wrote a book,” Carter said. “The book was rejected by 59 agents. It’s called Stand-Up Comedy: The Book.”

On Saturday afternoon, she will tell the story of how her 60th book submission transformed her career and her life.

Since Stand-Up Comedy was published in 1989, Carter has written three more books. For The Homo Handbook: Getting in Touch With Your Inner Homo — A Survival Guide for Lesbians and Gay Men, she won the Lambda Literary Award for best humor book in 1996.

Her other books are: The Comedy Bible: From Stand-up to Sitcom — The Comedy Writer’s Ultimate How-To Guide and The Message of You: Turn Your Life Story Into a Money-Making Speaking Career. She is currently working on a fourth book.

According to Carter, eight years ago, about 100 people attended her sister Marsha’s funeral.

“Even though (Marsha was) someone who couldn’t talk and walk, she gave me motivation for my book (The Message of You) and podcast, called ‘The Power of Purpose,’ ” Carter said. “Because I realized … that even though she couldn’t walk, she couldn’t talk and she could communicate just with facial expressions, (there were) … people at her funeral who got up and said, ‘Marsha gave my life purpose; she made me feel needed.’ And I realized, we all have a purpose in life, even though we might not even be able to see it.”

One of Carter’s purposes is to transform pain — hers and many others’ — into positive, healing power, as well as into punchlines.

“I guarantee after my talk, (for those who) attend, they will have lost five pounds, because stress and negativity can weigh you down,” she said. “Life doesn’t show up funny, you have to do something with it.”