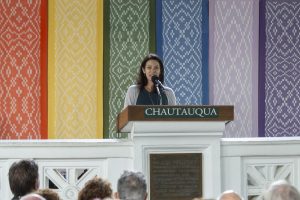 Katherine Ozment began her interfaith lecture on grace by harkening back to a time when that word wasn’t part of her vocabulary.

She was watching a Greek Orthodox ritual in the church across the street from where she and her family lived, when her son asked, “Why don’t we do that?”

“I said, ‘Because we’re not Greek Orthodox,’ ” said Ozment, a journalist and author of Grace Without God: The Search for Meaning, Purpose, and Belonging in a Secular Age. “My son asked, ‘Well what are we?’ And I blurted out without thinking: ‘We’re nothing.’ ”

Ozment, who was raised Presbyterian, said she and her husband assumed they’d find the answers to life’s questions outside of organized religion.

“(But) when I said that, I felt like I’d really failed my son,” she said. “Not just because I hadn’t given him a clear sense of identity and belonging, but also as a writer, because I didn’t have the words for what we were doing and how we were living, and the values we were trying to impart. I felt like I had really shirked my responsibility.”

After that realization, Ozment said she went to her editor at Boston Magazine and pitched an idea for a story about how Boston families were raising children in the absence of religion.

“(My editor) had two young children, so he said, ‘Please write that story,’ ” she said. “ ‘Because I need to know, everyone I know needs to know. There are so many of us doing this right now.’ ”

While researching the story, Ozment said she encountered statistics from Pew Research Center that showed a dramatic increase in the amount of “nones” — people who check “none of the above” in surveys about religion affiliation — in the United States.

After Ozment wrote her article, she went to give a talk to a group of atheists in Boston who had become her friends.

“One guy I’ll never forget raised his hand at the end of the talk and said, ‘I know why I left the church, and I know why my wife left the church,’ ” she said. “ ‘We don’t really want to go back; it doesn’t really feel like home to us anymore. But I don’t know where to go instead. I don’t know where to find a place for my two young children where we can escape the commercial forces in society.’ ”

Ozment realized she didn’t have an answer for him.

“I had presented the issue, but I realized I had to focus my energy on going out and finding out the answer to the question, ‘What do we do now?’ ” she said. “Because to walk away from something that has provided so much for so long, without asking ‘What are we going to do instead?,’ I think, is a shirking of responsibility. I think generations to come deserve more thought than that.”

So Ozment began her three-year journey around the country, researching the answers to the questions she’d uncovered.

“I traveled around to meet people either in houses of worship, in families’ homes, in gatherings of Humanists and atheists and secular Buddhists, trying to find examples of what I termed ‘grace without God,’ ” she said. “The things that religion once gave us — how do we find it in a secular way?”

During her journey, Ozment said she encountered many people who were burned out by the rituals common in many faiths, despite their possible benefits.

“I discovered a professor at Harvard named Michael Pewitt who studies ancient Chinese philosophy,” she said. “In a talk I attended, he talked about how what rituals really do for us is allow us to create an ‘as-if world.’ We walk into a ritual space, we enact a ritual that allows us to act as if we are living in harmony with one another, as if we are in harmony in ourselves, and we are rising to the occasion.”

By way of example, Pewitt described how after a monarch died in ancient China, there was a need to bring in a new leader.

“There might be rivalries or potential violence,” Ozment said. “And there was a ritual in which the leaders would stand in the formation of the celestial bodies during this handover of power. That reminded people, in a ritualistic way, the importance of harmony and of keeping everything together. That here, we act as if we live in harmony. Here, we act as if this is a smooth transition.”

In a ritual, Ozment said it’s possible to find “an elevation, an increase of yourself in the direction that you want.”

At the end of her quest for answers, Ozment published Grace Without God, and included in the epilogue a letter to her children concerning the things that she’d learned.

“For years you’ve been asking me the big questions, like miniature Greek philosophers, Catholic theologians or Buddhist monks,” she read. “You walk up to me as I wash dishes, or unpack groceries, or pay bills, and say, ‘What happens when we die?’ ‘Why are we here?’ ‘Who is God?’ ”

Ozment said, while she fears she knows very little, she wanted to dedicate the letter in her epilogue to the answers to those questions.

“No. 1: Your life is a privilege; live it well, and seek to help others live well, too,” she said. “No. 2: Find your people. Find friends that share your values, but not necessarily your beliefs. No. 3: Learn the religious stories. They are part of your heritage and your history, whether you like it or not. Study, too, the rich history of non-belief. Learn about the doubters and atheists and secular Humanists, who have likewise shaped our world.”

For her fourth point, Ozment said she encouraged her kids to “mark time with ritual.”

“Rituals help us feel connected through time to those of us who came before, and those who will come after,” she said. “Create new holidays, solstice parties, harvest festivals, baby namings, that speak to where you’ve come from, who you are and who you want to be.

And for Ozment’s fifth point, she reminded her children to “open yourself to awe and wonder.”

“Visit art museums, climb mountains and read poetry,” she said. “Pay attention, too, to the mundane. Notice the cracks in the sidewalk, the green of the leaves. Marvel at the full harvest moon, low in the autumn sky. The two-week-old baby in her mother’s arms. Don’t get so busy that you forget that we are all living in a mystery.”

What happens when we die? Near-death-experience expert Greyson shares 50 years of research