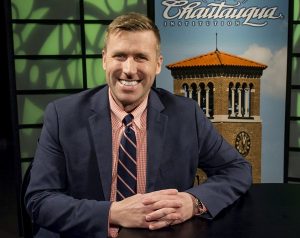 For Chautauqua Institution President Michael E. Hill, grace is an extraordinary gift given uniquely to everyone. He said this notion of grace is something journalist Krista Tippett embodies in her stories.

“I think what Krista embodies is a deep curiosity to unearth stories that need to be told,” Hill said. “And many times, the stories that she lifts up are about humanity and grace.”

When Hill first saw Tippett conduct an interview, he said he saw her draw out an inspiring story underlining moments of grace in society.

“I first saw her live, interviewing a former white supremacist and a Jewish gentleman who met in college,” he said. “She has this knack of finding moments of humanity that elevate our better angels, which is why we are excited to have her moderating the week.”

Throughout the week, Tippett has drawn out the stories of prominent speakers like the Rev. Jennifer Bailey and author Imani Perry. However, at 10:45 a.m. today, August 9, in the Amphitheater, Hill will interview Tippett and draw out her story behind her success. This conversation will close out Week Seven, “Grace: A Celebration of Extraordinary Gifts — A Week in Partnership with Krista Tippett and ‘On Being.’ ”

Hill said throughout her career, Tippett has told many stories that “need to be told.”

“(The lecture) will be a look at her career and her reflections on the theme of the week,” Hill said. “It will be about how she organizes her show around uplifting and inspirational topics.”

Hill said Tippett and her pursuit to uncover atypical stories made her an obvious choice for a week on grace.

“We first knew that we wanted to do a week on grace,” Hill said. “And because our definition of that was beyond just a religious notion, there was a belief that we needed someone who has a track record for elevating those stories.”

In 1983, Tippett graduated from Brown University with a degree in history and earned her Master of Divinity from Yale University in 1994. Tippett has written for The New York Times, Newsweek, BBC, International Herald Tribune Magazine and Die Zeit, a German weekly newspaper.

In 1986, she became a diplomat in West Berlin, and a year later became chief aide to the U.S. ambassador to West Germany.

She pitched her radio show to Minnesota Public Radio, and it became a weekly series distributed by American Public Media. In 2013, she co-founded Krista Tippett Productions, a nonprofit production company where she produced her show “Speaking of Faith.”

Currently, Tippett is the host of “On Being” (originally “Speaking of Faith”), an hour-long public radio show and podcast. She said the show is centered on questions that resonate through history, encompassing her passions of both religion and history.

“Our mission is pursuing deep thinking and moral imagination, social courage and joy to renew inner life and outer life and life together,” Tippett said. “It takes up the big questions of meaning and how they are being reframed in the 21st century.”

She said there’s an intersection between the core values of her show and Chautauqua Institution.

“I absolutely see that Chautauqua has, much longer than ‘On Being’ has been around, valued deep thinking,” Tippett said. “It’s not something that is just for the university level but for all kinds of people in the middle of life, in the middle of summer.”

Tippett said this is an opportunity to learn and make the world a better place, something she hopes Chautauquans will ponder after today’s lecture.

“There’s something about that act (of writing),” Tippett said. “Where you can actually give voice to things you didn’t know you knew, or didn’t know you thought, and the same thing happens in meaningful conversation.”