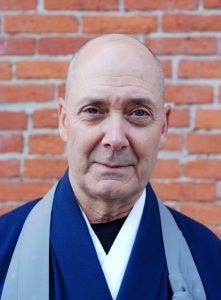 According to Roshi Bodhin Kjolhede, everyone encounters evil at some point in their lives — it’s only a question of when.

“In a way, all human beings are afflicted by the three poisons: greed, hostility and delusion,” said Kjolhede, a Zen Buddhist priest and abbot of Rochester Zen Center. “That’s something that we all have to struggle with at some time or another. But that’s half the truth. The other half is that, in our true nature, we’re free of all that.”

Kjolhede believes that “the mind determines our experience of life.”

“Yes, there are circumstances and conditions that are important, but largely our experience of life is determined by the mind,” Kjolhede said in a 2013 TEDx Talk. “This is supported by many hundreds or thousands of true stories of people who transcended extraordinarily difficult circumstances, in prison camps, prisons and other things.”

At 2 p.m. today, August 9, in the Hall of Philosophy, Kjolhede will deliver Chautauqua’s seventh Interfaith Friday lecture of the season on the subject of evil and its relationship to humanity. Kjolhede will be joined in conversation by the Rt. Rev. V. Gene Robinson, Chautauqua’s vice president of religion and senior pastor.

When Kjolhede was 22, according to a 2016 interview with Daily alum Georgie Silvarole for the Democrat and Chronicle, he was arrested for possession of hallucinogens.

“I was raised with no religion and had no use for it until I found myself in a holding cell in the Detroit jail,” Kjolhede told Silvarole. “That night I thought was the worst part of my life, but it was actually the best.”

After his record was expunged by a judge in return for a year of probation, Kjolhede looked for spirituality and peace, finding both in Rochester Zen Center.

Roshi Philip Kapleau, one of the founding fathers of American Zen, began the center in 1966 after studying in Japan and publishing his book, The Three Pillars of Zen.

Kjolhede was eventually established as Kapleau’s dharma-successor and the abbot of the center.

“We have this tremendous ability to change our experience of the world,” Kjolhede said in his TEDx Talk. “There are two ways of understanding this. One is as a matter of perception: What we think of as reality is really our interpretation of it. Our minds are like filters that filter out what we don’t want to experience, and give us what we do want to experience. This is enormously important.”

The second way of understanding change in our experience of the world, according to Kjolhede, is “a matter of function.”

Kjolhede said this simile works because we can flick the beam of a flashlight in any direction, an act which has “enormous consequences.”

In terms of evil and its influence in the world, Kjolhede said “we see evil as one side of the equation.”

The job of a practitioner of Zen Buddhism, according to Kjolhede, is to “liberate and actualize that true nature in our lives.”

“I hope that (attendees of my lecture) will take up either Zen meditation or some other kind of meditation,” he said. “Zen is very practical. In order to change ourselves, in order to bring out our true nature, we have to retrain the mind. We see mediation as the best way of doing that.”