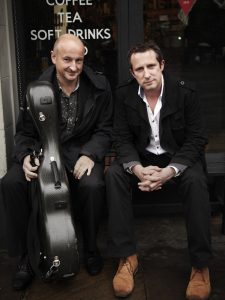 Classical guitar has a very slim repertoire — so the Eden Stell Guitar Duo is creating its own path.

Eden and Stell met at the Royal Academy of Music in 1998 — with vastly different musical backgrounds. Stell had practiced classical guitar from a young age, while Eden was a rock guitarist. The two meshed regardless, and have brought more than a few dreams full-circle.

Stell’s connection with Williams is more than inspiration, he said. The Eden Stell Guitar Duo’s work has brought them into contact.

“What’s very special for me is, 30 years down the line (from) when I was a student, I got to play to John Williams,” Stell said. “And now he’s become someone that we know, and that we’ve worked with — it’s a completion of the circle, really, for a child who was inspired by that.”

But Eden has a different story.

“Mark had a different sort of style,” Stell said, explaining that Eden began his career as a rock guitarist. “Suddenly, funnily enough, he listened to the quartets of (Maurice) Ravel, and was so inspired that he decided the classical route was for him. He started to experiment with classical guitar, and because he’s such an amazing player that does things so bloody well, he ended up studying classical guitar and caught up pretty quickly.”

But the two guitarists are on the same page now. Faced with a dearth of classical repertoire for guitar, Eden and Stell rearrange other classical pieces and commission new ones. Stell said the duo tries to present music in a different way.

“We try to search out repertoire that is totally inspirational to us and represent it on the two guitars — and sometimes, that gives it another life,” Stell said.

One such example is Italian composer Domenico Scarlatti’s keyboard sonatas, Stell said. The duo has reworked several of the composer’s pieces for guitar duo, and they believe that the rearrangement fits well.

Sometimes, Stell said, the duo’s search leads to forgotten gems — like one of this afternoon’s pieces, Francis Poulenc’s “Suite for Piano.”

“Guitar has a very limited repertoire compared to other instruments, so we try to reinvent great pieces — maybe forgotten pieces, like the Poulenc piano sonata,” Stell said. “It’s a piece that a lot of pianists probably wouldn’t play — but it’s an absolute jam. And on two guitars, it works so well.”

While part of the program is linked by Italian influences, the concert will end with a piece by Williams: the composer’s rearrangement of Johannes Brahms’ Theme and Variations in D Minor, Op. 18. Stell said the complex piece will make a strong end to the concert.

“That will finish the concert very well, because that’s about as much as a guitarist can cope with, with just four hands,” Stell said.

Those four hands have played together for over 20 years, both in chamber music settings and with orchestras. Stell said chamber music builds connections between performers and audience members.

The concert’s other pieces range in era and style. It will include several pieces by Italian-American 20th-century film composer Mario Castelnuovo-Tedesco, and contemporary guitarist Laura Snowden’s “Damn everything but the circus.”

“Chamber music is something Mark and I have always loved; it’s that interconnection and that bouncing off of each other — it’s wonderful,” Stell said. “I think that audiences get that interplay between people, that communication between people. And it’s a wonderful thing — I think they feel part of that.”