As the first chaplain-in-residence for the 2020 CHQ Assembly, the Rev. Margaret Bullitt-Jonas is hoping to “provide people with emotional and spiritual resilience” in her week of sermons.

“I want to give them practices and a perspective to guide them, to prevent them from becoming overwhelmed and collapsing into despair” over the climate crisis, said the Episcopal priest, author, retreat leader, and climate activist. 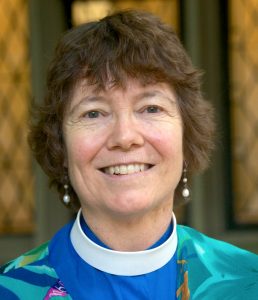 Bullitt-Jonas will preach on the theme “Faith for the Earth” for Week One of the CHQ Assembly, from Sunday, June 28, to Friday, July 3. After Chautauqua Institution President Michael E. Hill’s opening Three Taps of the Gavel address at 10:45 a.m. EDT, Sunday, June 28, Bullitt-Jonas will deliver her sermon, “Faith for the Earth: Love and Fear in a Time of Emergency.” Both Three Taps and the Service of Worship and Sermon will be broadcast on CHQ Assembly.

Bullitt-Jonas currently serves as Missioner for Creation Care in the Episcopal Diocese of Western Massachusetts and Southern New England Conference of the United Church of Christ.

The focus for Bullitt-Jonas’ ministry came out of her personal history. In her 30s, she began to recover from an eating disorder. Her memoir, Holy Hunger: A Woman’s Journey from Food Addiction to Spiritual Fulfillment, describes how, during her years at Harvard University, she overcame her food addiction and found her way to God.

“I was amazed by the power of God to heal, so I went to seminary to find out who this God was who saved me,” she said.

But she said a world event “placed an issue on (her) heart” that has become the focus of her ministry. Bullitt-Jonas was ordained to the Episcopal priesthood in June 1988. On June 23, 1988, James Hansen, a NASA scientist, testified before a Senate committee on the effect of greenhouse gasses on warming the planet.

“I wondered, if God would save one addict and restore her to a right relationship between body and spirit, is it not possible to restore the body and spirit of the earth?” she said.

Long involved in civil disobedience to draw attention to climate change, Bullitt-Jonas was arrested in 2001 with 21 other religious activists outside the U.S. Department of Energy in Washington, D.C. In 2013, she became so alarmed about the condition of the earth that she told her bishop — after serving as a parish priest for 25 years — she needed to focus full-time on inspiring and mobilizing people to care for the earth. She said her bishop supported her idea, but told her he needed to find a way to pay her a salary for this ministry.

“About that time, a parishioner sold some stock in oil pipelines and wanted to give the funds to a project that would protect the earth,” Bullitt-Jonas said. “The seed money for the project became available.”

“It was a sign that once we have a common thread or task, we can build bridges,” she said.

For Bullitt-Jonas, what the COVID-19 pandemic and the Black Lives Matter movement will mean for the future is still a chapter that is being written. Although all her in-person events were canceled for the foreseeable future, “the silver lining is that by going online, I am reaching people I never would have reached otherwise,” she said.

Bullitt-Jonas said she’s daring to hope that the Black Lives Matter movement will build a movement “that is intersectional in healing communities.” Her latest book, Rooted and Rising: Voices of Courage in a Time of Climate Crisis, co-edited with Leah Schade, is an anthology that features 21 essays by a wide range of individuals — scientists, scholars, faith leaders, and activists. It includes essays by Native American and African American leaders who share their traditions’ wisdom for healing the earth.

That book also includes an interview with the Rev. Lennox Yearwood, Jr., president and founder of Hip Hop Caucus, who spoke to Bullitt-Jonas about “opening up Martin Luther King, Jr.’s vision of the beloved community to the natural world as well as the human world,” she said. “It is the same fight — to transform communities.”

Bullitt-Jonas’ earlier books include Joy of Heaven, to Earth Come Down and Christ’s Passion, Our Passions. She is a graduate of Stanford University and Harvard, where she received her Ph.D. in comparative literature, and of Episcopal Divinity School, where she received her Master of Divinity in Pastoral Theology. She has organized numerous Christian and interfaith events focused on care for the earth, and leads retreats in both the United States and Canada on spiritual resilience and resistance in the climate crisis.

The Rev. Margaret Bullitt-Jonas’ Week One sermons are made possible by The Geraldine M. and Frank E. McElree, Jr. Chaplaincy Fund & the John William Tyrrell Endowment for Religion.