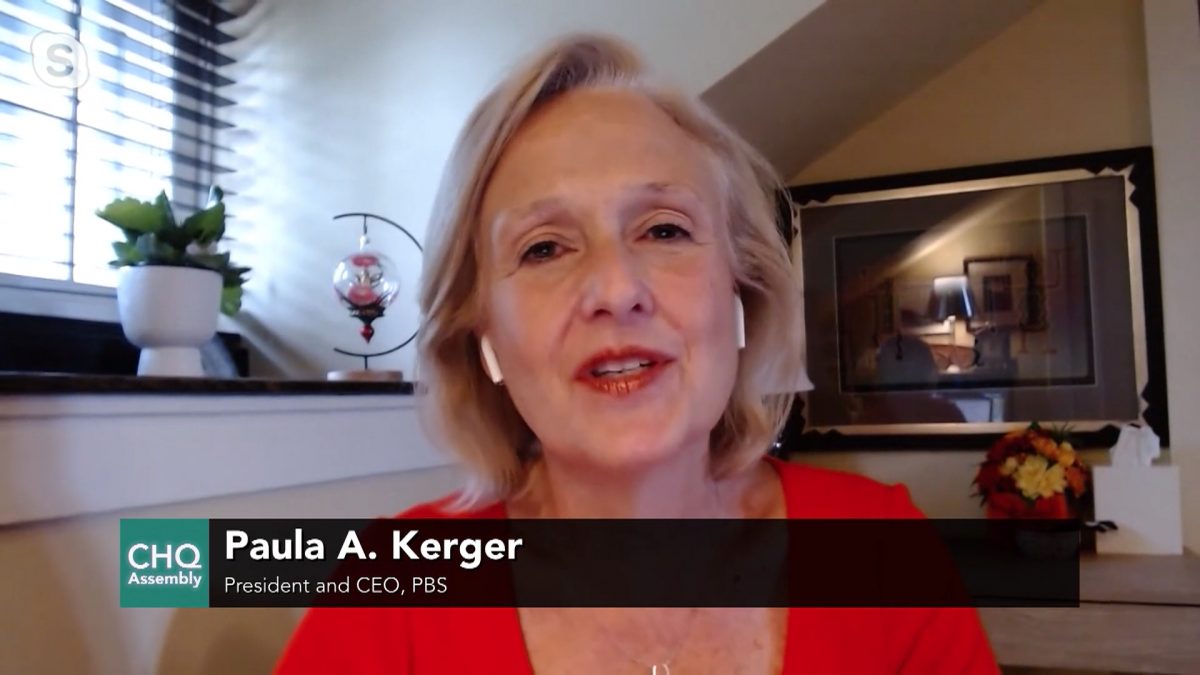 Fifty years ago when President Lyndon Johnson signed the Public Broadcasting Act, he wanted to create an organization that acted in the public interest.

“Time and time again, we need to remind ourselves and come back to the core of why we were established in the first place,” said Paula Kerger, CEO of PBS.

PBS is a relatively small media organization, she said, and spends less on content annually than Netflix does for a big series. All PBS affiliate stations are also locally owned, operated and governed, which Kerger said is important in “this era of media consolidation.”

She said that many news agencies aim to attract the most views, but PBS has a different goal.

“If we create a program that opens people’s eyes, and hearts, then we’ve been successful,” Kerger said.

Kerger became the CEO of PBS in 2006, and since then, the media organization has gone from the 14th most-watched channel in the United States to the seventh. Kerger talked on Thursday, July 16, on the CHQ Assembly Video Platform, with Chautauqua Institution President Michael E. Hill. The conversation, titled “Who Are The American People?” was the fourth part of Week Three’s theme of “Art and Democracy.” Kerger talked about PBS’ role during this time of social unrest, and how the organization is commemorating its 50th anniversary with the American Portrait project, which aims to capture who the American people are during this time in history.

Hill first asked how PBS’ 50th anniversary has been going, given the COVID-19 pandemic and protests against racial injustice.

“I think about all of the things that PBS has done over the years and all of the work that we have engaged. It has really prepared us for this moment,” Kerger said.

She said that PBS has led discussions around race for a long time, such as broadcasting works of filmmakers such as Henry Hampton and Stanley Nelson. PBS has also been focusing on programs that will help people make decisions about their daily lives, such as providing reporting on the pandemic. Kerger said the organization, throughout its history, has also focused on broadcasting for children, such as “Mister Rogers’ Neighborhood,” “Sesame Street” and recently “Molly of Denali.”

When LA Unified was discussing closing schools due to the pandemic in the first week of March, superintendent Austin Buettner asked Kerger to create an app to stream PBS shows, as many families did not have access to broadband.

“Our stations around the country have created an app, a home-learning environment that is both broadband-based, as well as broadcast-based,” Kerger said. “I think that we’ve tried to really help to fill in gaps, and continue the educational experience, particularly for so many families for whom connection to robust broadband is not a possibility.”

Hill then asked how PBS’ approach to programming has changed with people working and watching in isolation.

Kerger said that during the summer, PBS does a lot of productions in the field, such as “Antiques Roadshow,” which cannot be filmed due to the pandemic. Many British productions have been put on hiatus, as well, though she said there will be new programming in the fall.

PBS is also looking further down the line, like finding compelling stories from international producers, such as Peter Gelb, director of the Metropolitan Opera. PBS will broadcast a series of concerts Gelb is working on, which Kerger said will be recorded “in extraordinary places around the world with the world’s best singers.”

“That project would not have come to us (if other productions were not canceled), and it’s going to be spectacular,” Kerger said.

She said that PBS has recently added programs — old and new — centered on race, such as Henry Louis Gates’ series on reconstruction in the South after the Civil War.

Hill then asked about the origin of the American Portrait project, in which people across the country can send videos of themselves answering a series of questions about what it means to be an American.

“We were very interested in paying tribute to some of the extraordinary visionaries on whose shoulders we all stand,” Kerger said. “But I always feel that it is too easy to get tied up in your past, and all of the great things that have been accomplished and really lose sight of what is important: that 50 is a milestone. And you need to talk about what you will do moving forward.”

For the project, Kerger said PBS is populating a map of the country with people answering open-ended prompts that get to the heart of the U.S. as a nation.

PBS will select certain submissions and have filmmakers make a docu-series about them, which Kerger said will air January 2021, “so, after the election, when I think all of us will look at one another and say, ‘What does it mean to be in America?’ ‘Who are we?’ ‘Where are we going?’”

The final question from Hill was what should people be thinking about and looking at to understand the issues in this election, and also the future of the United States.

Kerger stressed the importance of people voting and educating themselves.

“My suggestion to everyone is don’t get caught up in the horse race in the end of the polls, but just to look at the facts,” Kerger said. “Look at the issues and vote, and encourage everyone around you to do the same. That’s how a society is strong, when people are engaged.”