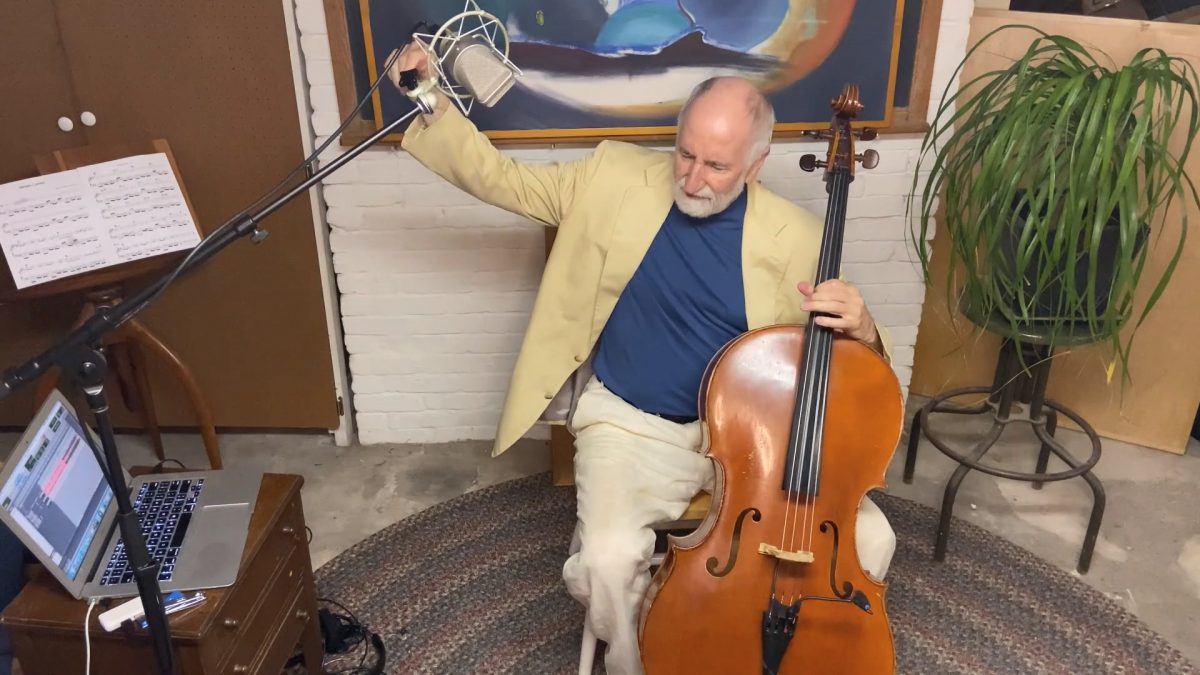 Armed with his cello, four-time Grammy Award-winning musician Eugene Friesen played alone in his Massachusetts home on July 5. His only audience was a fern on a stool in the corner while Friesen played as he recited a poem by Jalal Al-Din Rumi, a 13th-century Sufi poet who drew inspiration from his Islamic faith.

Friesen opened his eyes and put down his instrument.

“Hello, I’m Eugene Friesen, and I have to kind of imagine your generous applause, just like I have to imagine Chautauqua’s beautiful campus today,” Friesen said.

Friesen unwound the importance of spontaneous concert in his lecture “The Beauty We Love” released at 2 p.m. EDT on Wednesday, July 15. It was part of Week Three’s theme for the Interfaith Lecture Series: “Art: A Glimpse into the Divine.”

Eugene is an artist-in-residence with his fellow members of the Paul Winter Consort at the Cathedral of St. John the Divine in New York City, and teaches music as part of the faculty of the Berklee College of Music in Boston. The Paul Winter Consort creates  “healing prayer-in-concert” special events at the cathedral, including an “ecological mass.” Friesen is also a composer and conductor.

The name of the lecture is based on a line in the poem Friesen performed at the beginning of his performance, which was originally written by Rumi and popularized in the English-speaking world with Coleman Barks’ translation: “Let the beauty we love be what we do.”

Music speaks in a language that has a completely different kind of precision than words do,” Friesen said. “The mind that understands the workings of music, the theory, the techniques, the history, the style, is not the place to be when you’re actually making music to create expression, to communicate with the hearts of other beings.”

For the last 25 years, Friesen and Barks have put on joint performances in which Barks recites Rumi’s words and his own poetry while Friesen pulls on improvised notes on his cello strings. These performances “are an experience I’ve come to regard as profound as playing the music of J.S. Bach,” Friesen said.

Friesen said spontaneous playing requires a musician to stop thinking about the technicalities of making the notes and tap into a different kind of source for inspiration.

“Music speaks in a language that has a completely different kind of precision than words do,” Friesen said. “The mind that understands the workings of music, the theory, the techniques, the history, the style, is not the place to be when you’re actually making music to create expression, to communicate with the hearts of other beings.”

This is a step away from how music is taught with sheet music within a traditional Eurocentric context. Friesen attributes his reintroduction to improvised playing to the influence of Black jazz musicians who pioneered the genre. Then and now, jazz musicians craft a riff at the right moment while still matching accompanying instruments.

Friesen played another of his pieces, “Voice in the Wood.” The song of a Japanese bush warbler interlaced with his cello. He first heard the birdsong while recording music with the Paul Winter Consort for six full nights in the Miho Museum, which is embedded in the mountains of Kyoto, Japan. As he packed up to leave each morning when the museum opened to the public, the warbler’s song was a constant morning greeting that seemed to call for the music.

His next piece was inspired by the Friendship Bench program in Zimbabwe, which tackles a mental health crisis in towns with a network of “grandmothers,” or designated listeners who give therapy-like services to anyone who sits with them. The Shona language, one of many languages spoken in Zimbabwe, does not have a word for depression and substitutes this with “kufungisisa,” which means “thinking too much.” This word is the song’s name, and is meant to represent the healing that comes from listening.

The beginning and end are the same each time Friesen plays “Kufungisisa,” but he always improvises the middle. This is when he started smiling a little while he played.

He promised himself to meet a whale in person someday. He finally could when Paul Winter, a bandleader and composer, invited him to Baja, California, in February, when gray whales give birth every year.

Though gray whales don’t sing like humpback whales, Friesen and Winter regardless hopped into a rowboat to share a bay with a couple dozen whales of varying sizes just underneath the water. In the distance, a whale burst out of the water for air.

“An animal that big could blast this boat to smithereens,” Friesen recalled Winter saying. “You realize that, don’t you?”

Moments later, a whale sprung up out of the water near their little boat, close enough to Friesen that he could have reached out and touched the whale while making eye contact with it. Yet the two musicians weren’t afraid.

“I imagine the world of the whale to be a vast, blue cathedral,” Friesen said. “And though that world is being defiled by waste and noise pollution, there are still habitats that are intact. And I believe our role is to protect the beauty we have left.”

In his last song, “My Africa,” Friesen was inspired by how early humans lived in nature in Africa 200,000 years ago prior to migration to other continents.

“The way animals share a sonic space has become a kind of blueprint for basic concepts of rhythm, composition and orchestration,” Friesen said. “And the way they coexist in diversity really has inspired our harmony, our counterpoint and our polyrhythm. We developed our languages of music, dance and rituals from mimicking the orchestra of animals all around us.”

Chautauqua Institution Vice President for Religion Gene Robinson led the Q-and-A with Friesen following the lecture. He asked audience questions submitted through the questions.chq.org portal and by tweeting with the hashtag #CHQ2020.

“You didn’t just play the strings, you played the whole thing,” Robinson said.

Friesen has had his current cello, which sports a loving scuff on the front, for the last 30 years.

Friesen said music without words speaks in an “alternative language” that connects to other people, reaching where words can’t. Once while playing for a classroom, one student who was deaf sat in front of Friesen while he played, and she put her hands on the cello to feel the vibrations. These healing vibrations are that alternative language.

“The kind of listening we are invited to do with music is something that really takes us out of our troubled and worried mindset,” Friesen said. “So it’s an opportunity and an invitation to really revisit another world. It’s a world with a lot of important information for us.”