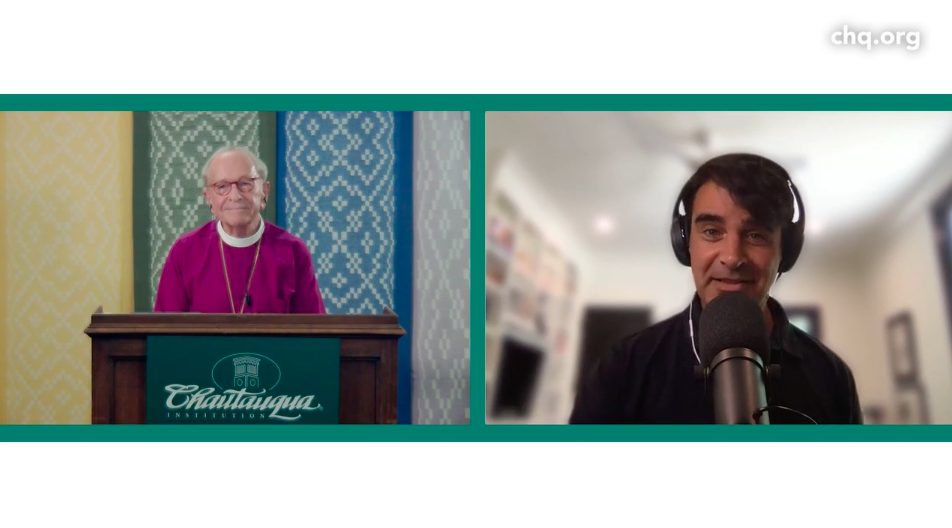 The Avett Brothers would have performed at the Chautauqua Amphitheater for the third time on July 22, 2020, after speaking at the Hall of Philosophy about their faith journeys earlier that day — if everything had gone according to plan.

The Avett Brothers are scheduled to return to Chautauqua and perform on Aug. 4, 2021. In the meantime, bassist Bob Crawford spoke with Vice President of Religion and Senior Pastor Gene Robinson. Found on the CHQ Assembly Video Platform with the title “Faith on Stage: A conversation with Bob Crawford of the Avett Brothers” and Crawford’s “The Road to Now” podcast, the discussion was a departure from the Interfaith Lecture Series’ Week Four theme, “Ethics in a Technologically Transforming World?”

However, the two did discuss how summer 2020 — with the combination of the COVID-19 pandemic, Donald Trump as president, and George Floyd’s death sparking a national and global response to support a historic civil rights movement — has changed their lives and their relationship with their Christian faith.

“In my life, I feel like the times when I am in the middle of the greatest distress, or that I am the most fearful, or I am up against the greatest challenge, that the gold lining in that dark cloud is it just seems easier to be in touch with God,” Robinson said, “or maybe that it’s easier for God to get through to me when I’m already beaten down.”

Robinson cited the situations in the Book of Matthew as an example.

Crawford agreed with this in reference to when he and his wife discovered that their daughter Hallie was diagnosed with a brain tumor in 2011.

Crawford grew up Catholic and was baptized at a few months old, went through the sacrament of reconciliation and went to church regularly with his family. Crawford said Catholicism was a source of trauma for his father, who grew up with a strict Catholic father of his own.

As a result, out of social pressure, Crawford’s father treated his religion as a set of hoops to jump through. When Crawford received his first communion, his family stopped attending church. As a teenager, Crawford was not as religious. His prayer habit had waned until he and his wife started praying two months before Hallie got sick. And when his father was dying earlier this year, his family believed he was going to live when he was sent to the hospital. But Crawford couldn’t rationalize how his father would pull through.

Crawford said prayer was like a muscle that provides comfort from God. Robinson agreed.

“Sometimes those muscles atrophy, and then when we need to use them, they fail us,” Robinson said.

Crawford said it was hard to complain about his own struggles during a pandemic. Every day, he said he is grateful to be home with his family for so long, while also feeling the weight of uncontrollable outside forces. But it has also forced him to be closer with God.

“Whenever I’m having a bad day, or I’m feeling like my ego has been hurt, or my pride’s been hurt, that’s it,” Crawford said. “You’re seeking joy in something that’s not God.”

Crawford’s daughter, now 10, was diagnosed with her brain tumor at 2 years old after having her first seizure in her crib. When she was first admitted into the hospital, Crawford and his wife started praying all the time, alone and with family and friends who visited Hallie. Crawford called this his conversion. He would say the rosary between three to four times a day.

After Hallie got sick, he spent more time alone praying with the Word like a Protestant. Crawford has added more Catholic-like tendencies in his faith practice since then, though he might end up Episcopalian as the way he approaches his faith shifts over time.

As this is Robinson’s religion, Robinson joked as if to welcome him as an Episcopalian right then.

“Welcome! Come on home,” Robinson said. “You know, sometimes I think people come to church for God and we give them religion instead. … Religion by itself is not like having a relationship with God.”

Crawford is also wary of religion on its own.

“Religion on its own can be used to justify things personally or on a national scale or corporate scale that run contrary to the faith, to the gospel,” Crawford said.

Robinson shifted gears to talk about a lyric from the Avett Brothers’ song, “Live and Die”: “You can say goodbye to how we had it planned.”

Crawford said that Seth Avett wrote that lyric and has said to Crawford that he thinks of Hallie every time he sings it. Crawford said the lyric was about “loving the Hallie that exists, though that Hallie is radically different from the one who was born and given to us by God.”

Crawford said Hallie lost the right side of her brain, doesn’t walk, and has to rely heavily on others for her needs.

“There isn’t a word that expresses how precious Hallie is today,” Crawford said. “ … When I am sad for the things that won’t be for her, and that hurts me and I’m sure it hurts my wife, when those times are upon me, the goal is to be in Hallie’s world.”

There have been bad points in the Crawfords’ journey, like when it was possible that Hallie would never be able to sit up and might have had to rely on a feeding tube for the rest of her life if she survived the cancer. They had to rush Hallie from a rehab facility in Charlotte, North Carolina, to Nashville, Tennessee, when they discovered her cancer was more severe than they thought. While packing up her hospital room, Crawford started praying to God to make the steps to the car for him because he felt he could not do it himself.

Crawford sometimes prayed that she would simply know joy. And she does.

“She’s one of the most joyful beings you could ever be around,” Crawford said. “She’s also a pain in the butt and demanding. And she’s a diva.”

Robinson said this was something to be emulated.

“All of us are trying to get the entire world to play on our playing field,” Robinson said. “And when you make those kinds of demands on people, most people are not willing to play on your field. So that effort to be in that person’s world, and to be present to that, seems to be something to long for.”

Crawford said that Hallie is never not in the present.

“She lives completely in the moment,” Crawford said. “And all that weight that’s on all of us to perform — and I mean like perform in life and have a good job and be successful and have people like us — all this weighs us down, and it is the root of all our problems and our woes. She’s free of that. She’s not carrying that. When she’s not happy, you know she’s not happy. But when she’s not happy, she’s not happy now.”

While reflecting on the scariest moments of Hallie’s cancer, Crawford said COVID closing everything down felt familiar.

“For my wife and I, it’s like, yeah, we know what this is like,” Crawford said. “We know this — the moment everything just completely changes, when what you planned, what you thought, what you expected would be there no longer is.”

In response to Crawford saying he sometimes becomes frustrated and scared about the pandemic, Robinson cited part of an Episcopalian prayer book that is meant for people who are sick.

“And if the answer to this prayer is that I have to lie here,” it reads, “let me lie here boldly.”

In regards to staying at home to prevent the spread of COVID-19, Robinson said there is a message for everyone in this prayer.

Crawford said his 9-year-old son has handled the changes due to COVID-19 well, but asked Robinson about how he counsels people to speak with their kids about this.

“In terms of faith, it’s a great time to remind ourselves and our kids that God never promises to take this difficulty away,” Robinson said. “God just promises to be with us in it and to never leave us. … It’s just enough. God being there doesn’t make it all alright, but it’s enough.” 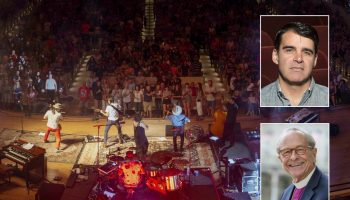