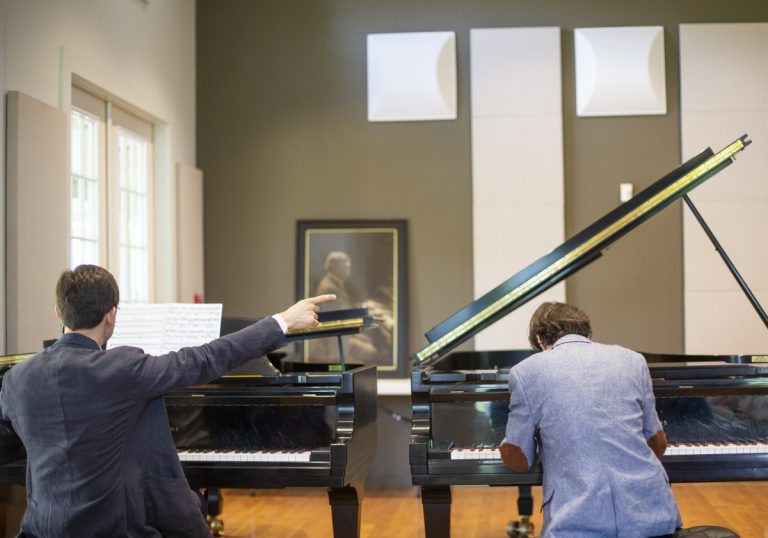 The “Polonaise-Fantaisie” was one of Polish composer Frédéric Chopin’s final works, a culmination of everything he had worked on in his career spanning three decades — a piece so complex and intricate, that by its very title, Chopin was unsure what genre the song would even fall into.

Charles Berofsky, a student from the Eastman School of Music, learned it on Zoom.

“There is something mind-boggling about knowing I have learned my most substantial piece yet over video chat,” Berofsky said. “I think I’ll be telling that story for quite some time.”

Berofsky, along with three other students from the Chautauqua School of Music Piano Program, will perform in their first recital of the season at 4 p.m. EDT on Friday, July 17, on the CHQ Assembly Virtual Porch.

Berofsky only knew one word to describe the “Polonaise-Fantaisie” in A-flat major, Op. 61: “Grand.”

“There are some pieces that take you on an adventure and this is one of them, because as a listener, you really have no idea what’s about to come around the corner,” he said. “There are moments of calm and lyrical melodies mixed with a triumphant ending. It has an exquisite heroic quality unlike anything you’ve ever heard.”

Although the virtual, video aspect is far from ideal, Berofsky said it has forced him to reflect on his progress as a musician.

“It’s good for music students to have to record themselves and listen back. That’s the best way to improve — listening from a third-person perspective,” he said. “If you weren’t already doing it before, you have no choice but to face it now.”

Sheena Hui, a student from the University of Michigan, chose Beethoven’s Sonata No. 32 in C minor, op. 111. Hui will be playing the sonata’s first movement, which opens in the style of a French overture and explores distant harmonies that are realized throughout the work. The movement unfolds into a concise sonata form featuring contrapuntal writing and motivic unity that are hallmarks of Beethoven’s late compositions, according to Hui.

“It features a lot of writing (specific to the) Baroque period,” Hui said. “However, Beethoven frequently used it in a context that is quite different from standard Baroque pieces. It’s incredibly stylistic.”

Anytime a musician touches on Beethoven’s sonata, Hui said references to the piece are always “quite dramatic.”

“Anyone who described this piece uses words that are huge,” she said. “You often hear musicians mention Greek mythology and creation for this one because it’s such an imagery-based piece of work. The opening feels like Atlas is holding up the weight of the Earth, and it continues that really heavy tone throughout.”

Alexei Aceto, a returning student from the Ithaca College School of Music, will perform another Chopin selection: “Barcarolle,” Op. 60. Aceto started learning “Barcarolle” as a School of Music student in 2019.

“I associate this piece with Chautauqua, no matter where I am,” he said.

Chopin composed “Barcarolle” between the fall of 1845 and the summer 1846, three years before his death. Aceto said it is deeply enigmatic with “layer upon layer of meaning behind it.” Most of that meaning is associated with water, as Chopin wrote it to be a Venecian gondolier song.

“‘Barcarolle’ is a standout in the repertoire of Chopin because the structure is so unique,” Aceto said. “Each section actually increases in tempo, but you have a consistent rhythm that propels the whole piece, representing the infiniteness of water and waves. It’s always heightening in intensity.”

Just as he did last season, Aceto hopes to see a “vast improvement” in the piece by the end of the summer’s programming.

“I know it’s a piece I am going to be working on and perfecting for life, which is really what higher learning is all about for me as a musician — an opportunity to be better than I was before,” he said.