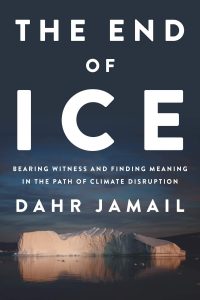 These are just a few of the iconic places Dahr Jamail traveled to in order to write his new book, The End Of Ice: Bearing Witness and Finding Meaning in the Path of Climate Disruption, the Chautauqua Literary and Scientific Circle’s selection for Week One.

“It was the most enjoyable project I’ve ever gotten to work on,” said Jamail, a Truthout staff reporter, author and journalist. “I have a passion for being in nature and outdoors. In most cases, I got to travel to these places with leading scientists, and learn even more about the majesty and complexity of this planet.”

The splendor of the geographical locations that form the basis of Ice is only half the point, though. From Jamail’s perspective, these places are the front lines of climate disruption at a time in the world when catastrophic disruptions are both easy to come by and far-reaching in scope.

“We’re in this time of converging crisis,” he said. “The issue of race is at the fore, (as are) COVID-19, the climate crisis. And the truth is that all of these other crises have been enveloped into the climate crisis. As we talk, 2.85 million acres of tundra and forest in the Siberian arctic have burned, and are burning as we speak.”

At 3:30 p.m. EDT Thursday, July 2, on CHQ Assembly’s Video Platform, Jamail will give his CLSC Author Presentation on The End of Ice, with the goal of making his audience understand that “all of those other issues plaguing the world today are going to be magnified by the climate crisis.”

“This is a presentation I’ve been looking forward to since January,” said Sony Ton-Aime, Chautauqua’s director of literary arts. “The End of Ice is a book that opened my eyes to the urgency of the situation when it comes to climate disruption. Though I’ve never been to Alaska, I’ve never been to Australia and I’ve never been to the Amazon, Jamail’s research and clear writing made those places appear before my eyes.”

Ton-Aime said The End of Ice made him fully aware of the danger that the human race is headed toward.

“At the same time though, I feel at peace,” he said. “After reading it, I realized that the best thing to do was to accept the situation and mitigate it as best I can.”

The actual writing of The End of Ice happened in between the many field trips Jamail embarked upon.

“I’d take copious notes and photos and tape interviews, and then I’d come home and when I was really in a groove with it, I’d immediately write up a draft of a chapter,” he said. “For example, I spent a full summer up in Alaska working on chapters up there, going out in Denali, going out on glaciers with other scientists.”

And though Jamail said these experiences were a “true joy,” at the same time, he said it was heartbreaking to see how fast climate change was affecting the ecosystems he’d come to love.

The seeds that eventually sprouted into The End of Ice began years ago, Jamail said.

“I lived in Alaska for 10 years, and I was very into mountaineering,” he said. “So I was going out and seeing receding glaciers and the dramatic shifts in climate and the warming temperatures long before I ever considered working as a journalist.”

Once his journalism career began, however, Jamail said he knew that he wanted to cover the environment.

After seven years of reporting on the Iraq War as one of the few journalists unaffiliated with the U.S. Army, Jamail shifted to environmental reporting after the Deepwater Horizon oil spill, which he covered extensively.

For young authors looking to emulate Jamail’s writing style and career trajectory, he said his best piece of advice was “just go.”

“The most important thing I ever did was to just go,” he said. “Go to Iraq, go to these protests that are happening across the country — whatever the beat may be that you’re passionate about, whatever the story is that’s near and dear to your heart: Just go. When you embed yourself in the story, the story is going to tell itself through you.”

This program is made possible by The Louise Shaw Van Kirk Dill Fund.

Tags : CLSCDahr JamailThe End Of Ice: Bearing Witness and Finding Meaning in the Path of Climate DisruptionWeek One
previous article