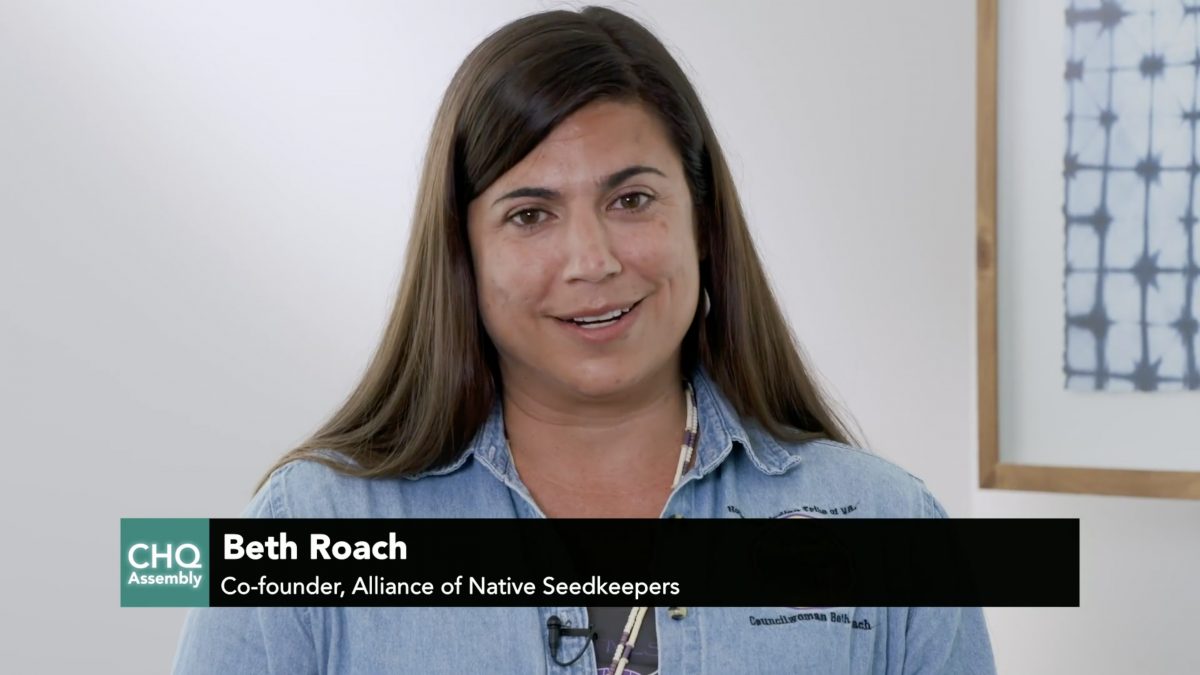 It all starts with Sky Woman.

Roach has told the story of Sky Woman, of the world’s creation, countless times since she first reconnected with her tribe 10 years ago. She told it once again on Wednesday for Chautauqua Institution.

Beth Roach presented her lecture, “Growing Hope,” on how the Alliance of Native Seedkeepers encourages cultural preservation through the cultivation of Native seeds, language and support networks. As the second speaker in Week One’s Interfaith Lecture Series theme of “Faith to Save the Planet” on Wednesday, July 1, Roach — as Alliance co-founder and councilperson for the Nottoway Indian Tribe of Virginia — described how the Alliance reconnects Native people with their ancestors and history. The lecture and subsequent Q-and-A is available through CHQ Assembly, and the audience questions after the lecture were submitted through questions.chq.org, or through Twitter with #chq2020.

The Earth we know was covered with water and inhabited by water creatures. Above it was Sky World, Sky Woman and her fellow people of the sky.

The sacred story ends with Sky Woman dropping to Earth. Roach said there are different versions of the story, where Sky Woman either fell from Sky World or chose to go. The creatures below, including geese, a beaver, a lemming and a muskrat, help her land safely by retrieving dirt underneath the water of this world. Sky Woman lands on the back of the turtle that expands to become the land of this new world. She lands on Earth pregnant and carrying seeds to spread across the land.

There are a few lessons that Roach draws from the story.

“The very basic parts of creation are that we have to work together, and Sky Woman brings seeds,” Roach said. “We protect (the seeds), we do not waste them, and we share them.”

Seeds with roots to specific tribes are in danger, Roach said, and tribal communities are disconnected to the ancestry of seed types as the diversity of food narrows.

Not many samples of endangered seeds are left, Roach said — like the Seneca Pink Lady Corn, the last known sample of which was planted last year.

Roach said the Alliance’s goal is to “reconnect, repopulate and revive” these endangered seeds and in the process, lift up the communities who cultivated them then and now.

Planting seeds like the Monacan strawberry corn — which Roach said tastes like maple sugar — in multiple personal gardens gives seeds a better shot at reaching harvest. If one garden ends up with a volatile climate in a given year while another garden is enjoying a more stable climate, seeds still have a chance to be planted the next year.

The Alliance’s work also extends into reconnecting with the native language of a given community, by using languages during seed sanctuaries — or a gathering specifically for gardening, which is how Roach met Rabbi Nate DeGroot through an event in the Alliance’s Ohio outreach — and working with nearby universities to study current and past versions of languages.

The organization also works to protect sacred sites. A few months ago, the Monacan Indian Tribe successfully defended its historic capital against a state government proposal to build a water pumping station.

Roach said it is easier for a tribe to protect sacred sites and defend communities against environmental racism when it is federally recognized. The Nottoway people gained federal recognition in 2010; the Monacans finally achieved this in 2018. Moving forward, Roach said the Monacans hope to officially change the “natural resource” designation of the Natural Bridge to that of a “cultural resource” from Monacan history.

Within the Native community, the natural and the cultural can at times overlap and shape each other. The Nottoway live within the Albemarle-Pamlico Estuary System, and Roach said a map of this watershed perfectly coincides with a map that draws perfect borders denoting different tribal languages. Roach said this is partially due to water serving as a natural boundary separating regions of tribes who spoke their own languages.

Roach also said that seeds can tap into ancestral memories.

Roach’s friend Asdzáá is both Mohawk and Navajo. Her family has lived on the same reservation plot in New Mexico after her grandfather had refused to be moved to the other side of the reservation years ago.

An anthropologist, who had taken a study sample of seeds from Asdzáá’s family land around the same time, returned in post-retirement to return the seeds to the family. Asdzáá’s grandfather had died, but her grandmother lives with dementia and often refers to Asdzáá as Asdzáá’s mother, who was her daughter.

“Are you going out with your father to plant the corn?” Asdzáá’s grandmother asked repeatedly after the seeds were returned.

The seeds brought old memories to the surface, and Roach said it was then that Asdzáá realized the importance of tapping into the roots of those memories through seeds.

The Alliance is self-sufficient through its online seed store (reopening Aug.1 due to the coronavirus pandemic and a website overhaul), but there are some medicinal and ceremonial seeds that the Alliance will never sell commercially.

Roach also stressed the importance of reclaiming stories within her own tribe.

The Nottoway started an annual clean-up event for the local Nottoway River 10 years ago. The first year, Roach and other volunteers pulled out 10 logging truck tires. They still pull out tires and trash from the 1980s because the logging in nearby swamps has released this trash into the waterways, as does a nearby water pallet plant.

And in the midst of public response against police brutality toward Black people, specifically the response in Richmond, Virginia, throughout June, reclaiming tribal history prompted Roach to acknowledge that the Nottoway is reconciling its own history with white supremacy, which is intertwined with the history of slaves in Richmond.

Nat Turner’s slave rebellion in the summer of 1831 occurred within the range of the Nottoway reservation. Fifty-five white Virginians were killed. This became a turning point for the passing of Jim Crow laws, and in Virginia, eugenics advocate and Virginia University pillar Walter Plecker would forever de-link Native communities from their history.

According to an archived front-page article in the Times-Dispatch from 2000, Plecker “believed there were no real native-born Indians in Virginia and anybody claiming to be Indian had a mix of black blood.” He used his position as the Virginia Registrar of the Bureau of Vital Statistics to access Native people’s records and change their races by hand to “colored.”

This “paper genocide” not only was the source of colorism within tribes, but it legally erased Native identities and individual histories. Roach said this is why it has taken so long for tribes to become federally recognized, and therefore able to advocate for their land rights and human rights. Roach herself felt disconnected from her tribe as a child because “it was virtually underground” until 2010.

What Roach described as Plecker’s life work was also the source of colorism as a byproduct of white supremacy within the Nottoway community and other tribes with mixed-race tribe members.

Referring to a picture of a committee initiative’s members with overwhelming representation of the tribe’s Black community, as well as Nottoway Chief Lynette Alston, whose leadership is a callback to the tribe’s pre-colonial matriarchal power structure, “Plecker is rolling over in his grave,” Roach said.

Roach said that knowing these stories was how the community could evolve into a stronger one.

“By reclaiming these seeds and these stories, this is how we’re going to move forward,” Roach said.