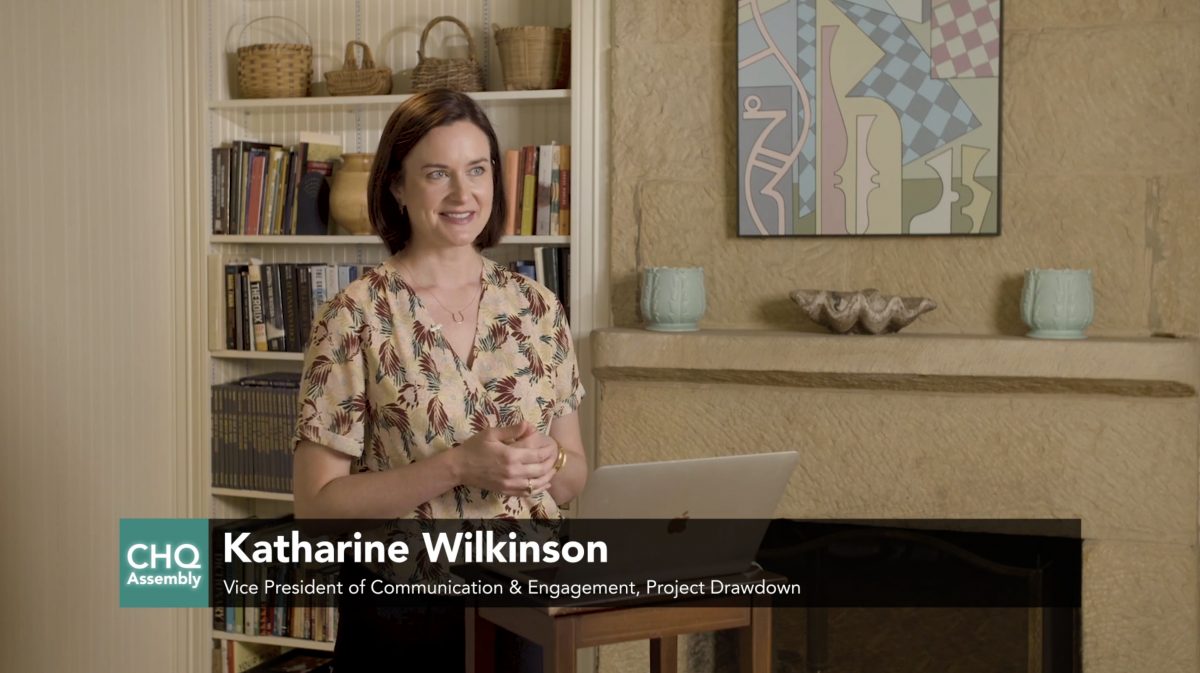 Climate change lectures don’t usually start with poetry. Katharine Wilkinson’s did, this one by David Whyte.

“Sometimes / if you move carefully / through the forest … / you come / to a place / whose only task / is to trouble you / with tiny / but frightening requests / conceived out of nowhere / but in this place / beginning to lead everywhere. / Requests to stop what / you are doing right now / and / to stop what you / are becoming / while you do it, / questions / that can make / or unmake / a life, / questions / that have patiently / waited for you, / questions that have no right / to go away.”

She discussed her time as an undergraduate, snowballing through her religion class and being fueled with a fascination with human rationality. And now Wilkinson is curious about what it means to be human on a rapidly shifting planet.

“So what I want to do today is offer up kind of a cartography of this moment, a snapshot of how I’m making sense of the climate crisis, and where we are and who we’re called to be,” Wilkinson said.

Wilkinson is the Vice President of Communication and Engagement at Project Drawdown, and the author of Between God & Green: How Evangelicals Are Cultivating a Middle Ground on Climate Change. Wilkinson spoke on Wednesday, July 1, on the CHQ Assembly Video Platform, delivering her lecture on “How to Reduce Greenhouse Gases.” This was the third presentation in Week One’s theme of “Climate Change: Prioritizing Our Global and Local Response.”

Wilkinson started with climate events of the current year, specifically the rising concentration of greenhouse gases.

She said carbon dioxide in the atmosphere is at roughly 415 parts per million, blanketing the globe with other greenhouse gases.

“We are in totally uncharted territory, as a human species,” Wilkinson said. “We’ve never lived on a planet like this, much less (the) planet that we may be heading for.”

From 1850 to the present day, Earth’s temperature has been rising, and is approaching the 1.5 degrees Celsius increase limit marked by the Paris Agreement. Wilkinson said that the world has to cut around 50% of all emissions by 2030 to have a shot at a future with a stable climate. Wilkinson defined the point in time that greenhouse gases decline each year as “Drawdown,” which is where the name for her non-profit, Project Drawdown, comes from.

Wilkinson said that Project Drawdown has three interconnected areas of action: reducing sources of emissions, uplifting the carbon cycle and improving equality for everyone.

A major part of reducing emissions is powering a world without burning fossil fuels. Wilkinson said part of this will include shifting production to wind, solar and geothermal energy, as well as using electricity more efficiently. Another part is addressing food waste and shifting the global diets to less meat and more plants. Wilkinson also said that reimagining transport will play an important role, by having more people walk, bike or use public transit, and replacing petroleum with renewable energy to fuel these vehicles. Then there is the task of transforming existing buildings into ones with more sustainable heating, air conditioning, water and lighting systems.

As society works on all these, Wilkinson said the sources of the carbon emissions, such as coal plants, must be stopped as well, “not only because of their climate impacts, but because of the disproportionate impacts they’re having on poor communities, and communities of color and indigenous communities.”

Project Drawdown’s second focus is uplifting the carbon cycle and putting more carbon back into the soil. This includes protecting and restoring mangroves, salt marshes and seagrass meadows, as well as forests, wetlands and grasslands.

“One of the things that doesn’t get talked about enough here, is shifting agriculture practices to actually regenerate soil,” Wilkinson said.

And the third area of focus for the nonprofit is improving society, including advocating for universal access to high-quality education and voluntary reproductive healthcare.

“These are fundamental human rights, and they’re cornerstones of gender equality. Their ripple effects are myriad, including planetary ripple effects, and that includes some direct impact on emissions,” Wilkinson said.

She recommended that anyone who wanted to dig deeper into the intersection between human rights and climate change, to look at the research done by Christina Kwok at Brookings Institution, and also on Drawdown Review.

“For me, the Drawdown Review and our work at Project Drawdown leaves me with a bit of an emotional paradox. In some ways, a sense of hope for what’s possible. But at the same time, a sense of overwhelm about just how much needs to be done to realize that possibility,” Wilkinson said.

For Wilkinson, it was “incredible” to see climate policy being a main issue in the Democratic presidential primaries, with Jay Inslee, Elizabeth Warren and Bernie Sanders centering it in their campaigns. She said the climate crisis has been, fundamentally, in a leadership crisis for far too long.

“We absolutely have to have transformational leadership,” Wilkinson said. “I think that means leadership that is much more characteristically feminine, and also more faithfully feminist leadership that is rooted in compassion, and connection, creativity, and critically collaboration.”

Wilkinson sees transformative leaders having four distinct qualities: a focus on making change and moving beyond ego, competition and control; healing systemic injustices rather than deepening them; embracing a heart-centered approach and not just a head-centered one; and recognizing that building community is the foundation of a better world.

The lecture then moved into the Q-and-A section, moderated by Chautauqua Institution Chief of Staff Shannon Rozner. One of the first questions from the audience was if industries and governments should be the bigger players, since individual changes, such as eating less meat or turning off the lights, cannot possibly make a difference.

Wilkinson said that when people integrate solutions into their daily lives, it sends a cultural message, and also potentially a marketing signal, to these industries. For her, daily actions means being the change she wants to see in the world.

“When I was 16, I became vegetarian. Do I think I’m single-handedly having a measurable impact? Maybe, maybe not. But it gives me a chance. Three times each time I eat to reflect on my connection with living systems on this planet, and why I’m doing what I’m doing,” Wilkinson said.

One of the next questions from Rozner was about the role developing countries play in combating climate change, specifically countries that feel they need to catch up economically and societally.

Wilkinson said much of the responsibility to combat climate change lies with countries that participate more in creating the problem. These countries, such as the United States, have more resources and the capacity to be more resilient toward changes on the planet.

“We do need to bear the credible inequity and fundamental unfairness that those who have done the most to cause the problem are probably going to suffer, (but) those who have contributed the least will suffer the most,” Wilkinson said.

Rozner closed the lecture by asking Wilkinson about three actions viewers can take when they go home.

“This is always the favorite question, and you can tell at this point that I do a lot of reframing of climate questions,” Wilkinson said. “So, there are no three things that everyone should do, because we’ve all got different superpowers to bring to this moment.”

She said that people can think about something they can do. Wilkinson quoted from Katharine Hayhoe: “The most powerful thing we can do is talk about climate change, and particularly to talk about solutions.”

In sermon, Bullitt-Jonas says to prepare for adversity, find others who seek to build a world on love and justice