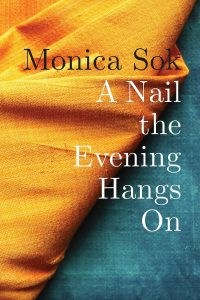 That quote resonates with Sok in part because of her belief that “we’re all connected,” and that all our personal histories — whether they be solely our own or influenced by someone else’s — need to be engaged with and seen, no matter how much we might like to look away.

“I am a daughter of genocide survivors,” said Sok, the Week Two Chautauqua Literary and Scientific Circle author. “The things I’ve inherited from my family members, including intergenerational trauma and survival mode — these are very deep topics. My book, A Nail The Evening Hangs On, is about my experiences as a second-generation Cambodian woman navigating this history that I never learned about in school.”

At 3:30 p.m. EDT Thursday, July 9, on CHQ Assembly’s Video Platform, Sok will address a virtual audience with a CLSC Author Presentation on A Nail The Evening Hangs On, her debut poetry collection.

“A Nail the Evening Hangs On does justice in its well-crafted poems to both the weekly theme, ‘Forces Unseen,’ and the CLSC vertical theme, ‘This Land,’” said Sony Ton-Aime, Chautauqua’s director of literary arts. “By juxtaposing the landscape of the tumultuous 1970s Cambodia of her parents, with U.S. cities where she has lived, Ms. Sok is bringing to the surface — through memories, revelations and, at times, warnings — these unseen and unsuspected forces that connect our past to the present.”

The creation of A Nail the Evening Hangs On took years, Sok said, because she believes a person needs to be truly ready before they can tell a story.

Sok said her writing began imagistically: She’d “jot down an image” and a couple of months later she’d look at the image again and attach a different meaning to it.

“A lot of times, throughout this first collection of poetry, there were a lot of difficult subjects that I was writing towards,” she said. “I don’t necessarily write directly about war. I won’t directly write about violence, because I don’t want to perpetuate that violence; but in order to get to a space where I could imagine … some kind of reconciliation or some kind of healing process or some kind of acknowledgment of that violence that would also provide a space to heal — it took a lot of preparation.”

Sok didn’t grow up learning about the Khmer Rouge regime or the Cambodian genocide and, said because of that, she always had questions about it.

“My family members were not open to discussing what we lived through when I was a kid,” she said. “For me, when I was growing up and got older, I became really curious about our family story.”

That curiosity led Sok to the book First They Killed My Father, by human rights activist Loung Ung, which caused Sok to connect Ung’s storytelling to her own family’s experiences.

And yet, being a second-generation Cambodian-American woman, Sok said she didn’t feel fully reflected in the experiences she read about, and wanted to write the story that she couldn’t find.

“I could’ve written prose, but there was something about poetry that seemed to welcome the fire I wanted to write with,” she said. “Poetry encouraged me to affirm my own experiences.”