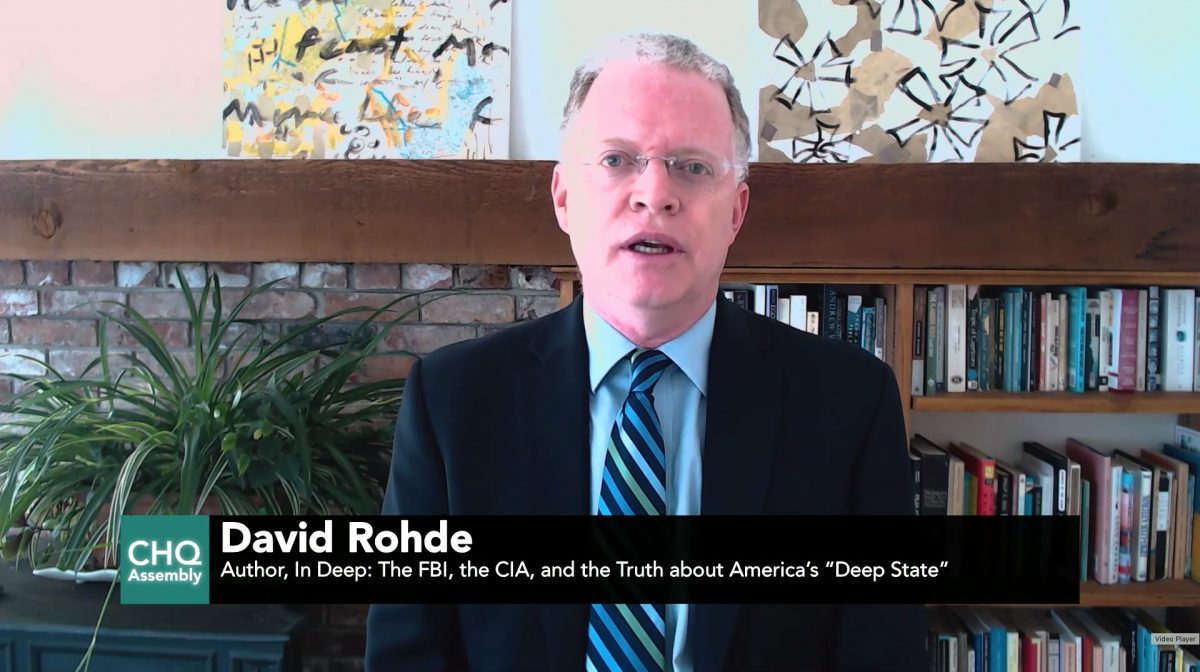 When the Senate investigated decades of work from the FBI and CIA in 1976, they found that these agencies looked into more than half a million Americans who were involved in political activities protected by the Constitution, such as peaceful assembly.

Most notably, the FBI had sent a letter to Martin Luther King Jr. and his wife with alleged evidence that he was having an affair, and that he should commit suicide or be publicly humiliated.

“But obviously, thank God, Dr. King didn’t fall for that FBI ruse,” said David Rohde, journalist and executive director of Newyorker.com. “But this was an astonishing abuse of government power.”

Rohde has been awarded two Pulitzer Prizes: one his reporting on the massacre in 1995 of Bosnian Muslims by Serbian forces in Srebrenica and the second for his for his account of being held prisoner by the Taliban for seven months before his escape. His most recent book, published this spring, is In Deep: The FBI, the CIA, and the Truth about America’s “Deep State.”

Rohde spoke on Wednesday, July 8, on CHQ Assembly, delivering a lecture for the Chautauqua Lecture Series titled “Does the Deep State Exist?” as part of Week Two’s theme of “Forces Unseen: What Shapes Our Daily Lives.” His lecture was originally scheduled for 10:45 a.m. EDT on July 7, but due to technical difficulties was rescheduled and broadcast at 3:30 p.m. EDT July 8.

A Monmouth University poll in 2018 found that 70% of Americans believe that groups of active government officials are secretly influencing policy in Washington — commonly known as the “deep state” — and a majority felt that unelected officials had more power than they should.

“I completely agree with the premise that our elected officials should have the power in Washington,” Rohde said. “If President Trump today orders an unelected government official to carry out policy, that government official should obey that order. That’s his or her job, unless the order is somehow illegal or unethical. An elected president, a senator and a house member, they should have the power in our democracy.”

Rohde said that one of the few topics liberals and conservatives can agree on is the existence and dangers of a deep state. Liberals are more likely to cite as evidence the military industrial complex, meaning that certain generals, defense contractors and companies are pushing the U.S. into endless war. Conservatives lean toward the idea of an administrative state, a growing federal bureaucracy that, Rohde said, “they feel is constantly and relentlessly … inserting itself in our lives and taking away our personal liberties.”

The COVID-19 pandemic is spurring the debate of the usefulness of wearing masks, and accusations that health officials are a part of the deep state.

“What’s so extraordinary and very, very tragic this spring and summer,” Rohde said, “(is that) our ability to agree on basic facts, our ability to trust government experts, is a matter of life and death.”

Generations of Americans have been suspicious of a deep state, including in 1976 when a committee in the Senate, chaired by Frank Church (D-ID) and John Tower (R-TX), investigated decades of work done by the CIA and FBI.

Rohde said that the committee found that the FBI had investigated more than half a million Americans involved in legal political activities, and tried to disrupt and discredit them. Groups targeted included the John Birch Society and the Civil Rights Movement, as he had mentioned earlier with King.

Rohde interviewed the chief investigator of the committee, Fritz Schwarz Jr., who attended Harvard. Because CIA agents at that time primarily went to top schools, Schwarz thought he would identify with them more. Instead, he was astonished by how effectively senior CIA officials could lie without being caught, and identified more with FBI officials. What did trouble Schwarz about the FBI officials was not that they were skilled liars, but how they rationalized their actions.

“I’ve seen in my reporting,” Rohde said, “the tendency of human beings to rationalize that they need to break laws, and, in some cases, I’ve seen while covering wars overseas, the need to use violence to protect their country, their way of life, their cultures, their faith and even their family.”

Rohde then shifted to how Trump’s use of the phrase “deep state” has grown. At first, Trump applied it to the CIA and FBI’s investigations of his 2016 campaign and alleged ties to Russia. When Pentagon officials questioned the president’s desire not to have a group reinvestigated for war crimes, he called the Pentagon part of the deep state. Recently, Trump supporters have also called public health officials part of the deep state.

Trump is skeptical of government in general — as are many conservatives — and believes that government officials work harder for certain presidents, slowly implementing policies for presidents they don’t like, according to Rohde.

“But the president is sort of a product of his own background. He grew up in New York in a very rough and tumble and hyper-competitive world. … In New York, there’s a sense that everybody in every project has sort of an angle; everybody is exaggerating a little bit what they’re claiming regarding their deal,” Rohde said.

Rohde has interviewed staffers of the Bill Clinton, George W. Bush and Barack Obama administrations, as well as current and former members of the Trump administration. Rhode said that these sources said that “the president’s view of these scheming civil servants is exaggerated, that it’s not true, it’s not as severe as President Trump says.”

Tom O’Connor, former president of the FBI Agents Association, said that there is a deep cynicism about the state of U.S. politics. O’Connor, as well as other CIA officials Rohde interviewed, felt that their work is used to score political points, and is hidden by politicians when it does not help their cause.

Rohde asked O’Connor if he ever considered running for office, and he said, “No, I’d never run for office. I wanted to do something that actually has meaning.”

“That’s a very dangerous sign, I think, for the state of our democracy,” Rohde said. “And I worry that we’re in a constant cycle of conspiracy theory and revision and fighting, that’s leading us to question basic facts.”

This questioning of basic facts has been seen through the pandemic. Rohde said that most liberals believe the numbers of COVID-19 deaths is more than what the government reports, whereas conservatives believe that the amount of reported deaths is fewer.

The lecture then shifted to a Q-and-A session with Matt Ewalt, vice president and Emily and Richard Smucker Chair for Education, and questions sent in from the live audience. Ewalt asked Rohde what role journalists play in the culture at the moment.

With the rise of the internet, the journalism industry had to change its basic business structure of print advertising. Rohde said this collapse of print ads led to the pressure on journalists to get the audience to watch and click on their work, have exciting headlines, and play on conspiracy theories — while also sticking to the facts.

“And the more partisan reporters are, (as opposed to) just people trying to write great news stories with just facts in them, I think that hurts us,” Rohde said. “Let the columnists throw bombs. And so myself, in my own work, and other colleagues try to stick to the facts as much as possible.”

The last question was about how people can have a healthy skepticism and not drown in conspiratorial thinking.

Rohde advised people to subscribe to their local newspapers and websites, read widely and also read more mainstream news instead of articles on Facebook and social media.

“Just give mainstream journalists a chance. I think you’ve seen what is out there on the wild, wild web,” Rohde said. “And I think it’s time to give a chance for vetted, traditional journalism.”