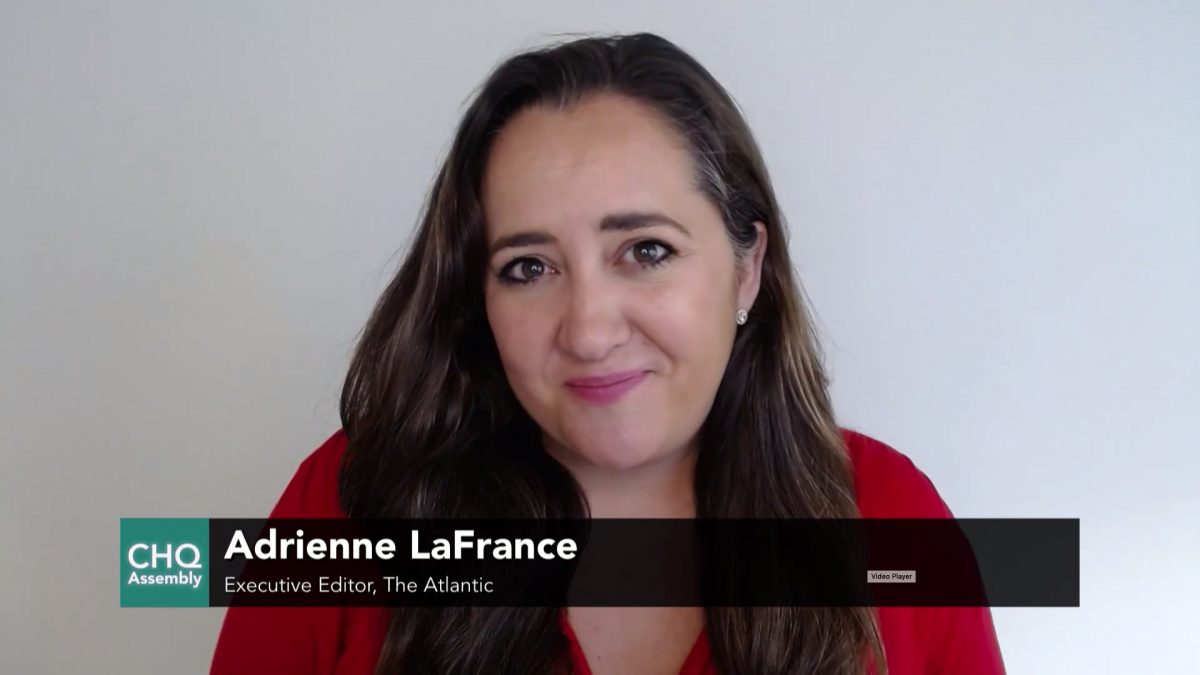 The internet allows anyone to spread information easily — this includes conspiracy theories. Social media has also changed the nature of conspiracy theories, as Adrienne LaFrance, executive editor of The Atlantic, said different websites incentivize engagement, keeping people’s attention, as well as quick, emotional responses. This is where QAnon enters.

LaFrance said that the premise of QAnon is that “a secret and powerful cabal of evil, high-profile Democrats is running a global child sex ring, and that Donald Trump is the savior figure that will eventually free them.” QAnon started on the internet in October 2017 with posts on 4Chan — one of the most famous theories was that former Secretary of State Hillary Clinton would be arrested soon. She was not arrested, but these posts generated a lot of attention and a following around Q, a figure who drops clues online that disciples or followers attempt to piece together. Clues are sometimes posted multiple times a day.

“There’s a narrative that is evolving, that really lends an air of legitimacy to the conspiracy theory, that a lot of its followers have seized upon,” LaFrance said. “They see these posts and assume that because it’s happening in real time, it must be true.”

The more she talked to people who believed in QAnon, the more she realized they were “deriving a sense of faith and serenity, and almost religious satisfaction, from the conspiracy theory. It’s a belief system, and it looks a lot like a new religion.”

LaFrance wrote The Atlantic’s June cover story about QAnon, and has reported on misinformation and media for more than 15 years. At 10:45 a.m. EDT Wednesday, Aug. 12, 2020, on the CHQ Assembly Video Platform, LaFrance gave a lecture titled “The Conspiracy Theorists Are Winning,” as part of Week Seven of the Chautauqua Lecture Series, themed “The Science of Us.” The lecture was co-sponsored by the Chautauqua Women’s Club as part of their Contemporary Issues Forum. LaFrance discussed the origins of the internet conspiracy theory and the harms it has caused, her experience talking to theorists, and what society and individuals can do to promote a healthier democracy.

Over her time reporting on QAnon, LaFrance has learned of beliefs that the moon landing was faked, COVID-19 is a bioweapon unleashed on the world by China and the “deep state,” and one man told her that John F. Kennedy Jr. did not die in a plane crash, but was assassinated by Hillary Clinton.

“I asked this gentleman, ‘What evidence do you possibly have to support that such a thing could have happened?’ He didn’t miss a beat. He said, ‘What evidence do you have to say that it didn’t?’” LaFrance said. “We are living through a mass rejection of reasons, a mass rejection of enlightenment values. People are breaking with reality at an alarming scale.”

LaFrance said that conspiracy theories are nothing new; in 1775, Samuel Adams told the Continental Congress that King George III was taxing the colonists to turn them into slaves.

“This is to say nothing of actual slavery taking place at the time. There’s no evidence to suggest that this plot was actually a part of King George’s taxation attempts,” LaFrance said.
“(But) it gathered a ton of steam, and people believed it.”

Watergate was also considered a conspiracy theory, until that conspiracy was proven true.

“The difference, of course, is that investigative journalism requires the confirmation of facts before publication,” LaFrance said. “Conspiracy theorizing can be referred to as investigating when it’s merely connecting unrelated events, people and ideas, and saying that they have closer ties than they actually do no evidence required.”

LaFrance cited political scientist Joseph Uscinski, who said a person’s likelihood of believing conspiracy theories can be determined how they agree with four statements: Much of society is controlled by secret plots, a few people will always be in charge in American democracy, the people who the country are not known to the voters, and a small, secret group of people determine events like wars, recessions and elections. The more a person agrees with these statements, and how intensely they agree with them, Uscinski says the more prone they are to believing conspiracies.

“When people talk about why a person might believe in conspiracy theories, they often refer to a feeling of being out of control and wanting to impose order on a chaotic world, or wanting to explain away something awful that’s happened,” LaFrance said.

LaFrance said that President Donald Trump is a conspiracy theorist and actively promotes these theories. This can be seen 10 years ago, when he said that former President Barack Obama was not born in the United States. LaFrance said newsrooms debated for a long time on how to cover conspiracy theories, and she thought that people would naturally see conspiracies as a way of getting attention. She believed that if journalists ignore these theories and covered more important topics, truth would prevail.

“Fast forward to today,” LaFrance said. “Donald Trump is the president of the United States, and he still actively promotes conspiracy theories.”

One example LaFrance gave was of Trump retweeting an image in March from Dan Scavino, White House deputy chief of staff, that showed Trump playing a violin. LaFrance said many people saw this image as an “echo of Nero, they thought it was an image of a president fiddling while the world burned;” but the phrase at the top of the image, “Nothing Can Stop What Is Coming,” is a popular reference in the QAnon community.

“They saw the president tweeting this and saw it as not just a wink or a nod, but a direct acknowledgement of their conspiracy theory and their worldview,” LaFrance said.

LaFrance said she was wrong to think that conspiracy theories would go away if people ignored them, and “to dismiss them today requires a willful blindness at a time when they’re really dangerous.”

She said individuals can help combat conspiracy theories by sharing facts respectfully, not mocking theorists and earnestly asking them questions, such as, “How many people would have to be in on this in order for it to be true?” On a societal level, LaFrance said it is very helpful to have a healthy democracy, which can be achieved by promoting an independent free press, supporting human rights and ensuring people understand how to guard against biases.

LaFrance also said that a handful of tech companies have a “stunning amount of power over our lives.”

“People often treat the internet as fully baked, like it’s finished, like the internet that we have now is the one that we will forever have,” LaFrance said. “That’s just not the case. We could rebuild this thing entirely. Maybe we should.”

LaFrance said while companies like Facebook, Google and Amazon make people’s lives easier, more convenient and sometimes richer, they have a lot of control over their consumers.

“These companies can control the information you see; they control how that’s different from the information a person sitting right next to you on a different device might see, even if you Google the same thing,” LaFrance said. “They can toy with our emotions, as Facebook’s own research has shown. They can influence the outcomes of elections.”

LaFrance said alongside the large amount of misinformation on the internet, platforms treat facts and fiction neutrally. She said people should acknowledge that the internet and the “democratization of publishing” has allowed for many marginalized voices to be heard.

“I don’t envy these companies. This is a hugely, hugely complicated problem. The scale of this problem, the scale required to fix it, it’s unprecedented in human history,” LaFrance said. “We’re talking about billions of people who use a single publishing platform. It’s like a magazine with 2 billion editors. It’s really a nightmare.”

LaFrance said that the web may change in the 2020s or 2030s through reinvention or regulation, and that the health of institutions that promote democracy may improve.

“Even then, conspiracy theories will be with us and conspiracy theorists will be among us,” LaFrance said. “They will, as they always have, warp and stretch to fit our informational environments or technological realities and our world.”

The lecture then transitioned to a Q-and-A session with Chautauqua Institution Vice President for Advancement Geof Follansbee. He asked LaFrance about the damage conspiracy theories have caused.

LaFrance talked about Pizzagate, which was a predecessor to QAnon, in which a young man believed a local pizzeria in Washington D.C. was the headquarters of the group of powerful Democrats who were running an underground sex ring. This man did not find what he was looking for and, despite gunshots and an encounter with the police, no one was injured. He was sent to federal jail.

“I think that one gentleman’s case is a really important one, because it shows how well he took a really reckless action,” LaFrance said. “He’s also a victim of conspiracy theorizing himself, and he really believed that this was true, and was surprised to find that it wasn’t.”

LaFrance said that the man regretted endangering people, but still believed in the conspiracy and that the “the intel on that wasn’t 100%.”

Follansbee asked how LaFrance built trust among conspiracy theorists in order to report on them.

LaFrance said that many QAnon theorists are against the media, so they did not trust her because she was a reporter. She also found that those in a position to profit off the conspiracy, such as YouTubers with large audiences and those selling merchandise, were less likely to talk to her. The ones who were happy to talk to her were the people who earnestly believed in the conspiracy and wanted to spread the message.

“I interviewed one woman in March, and she suggested … ‘Look at the pandemic. This is proof that the apocalypse has arrived,’” LaFrance said. “The conspiracy theorists will use that to support their worldview, but they will use any data point to support their own view.”