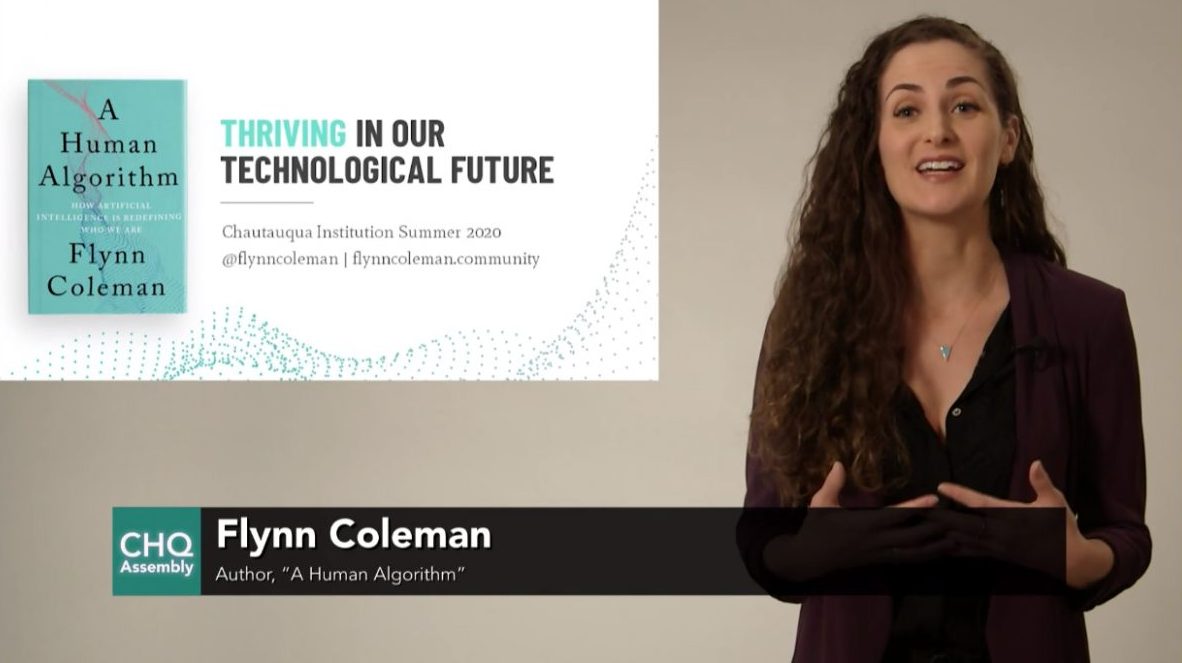 Billye is a Giant Pacific Octopus who lives in the Seattle Aquarium. Billye and other octopodes have learned to open jars — they can even open medicine bottles with childproof lids.

“While (octopodes) have a good-sized central brain, two-thirds of their neurons are in their eight arms controlling hundreds of suckers,” said Flynn Coleman, author and international human rights attorney. “They use distributed intelligence to perform multiple tasks simultaneously and independently: something that the human brain cannot do.”

Much of the conversation around artificial intelligence is how machines can mimic the human brain, which Coleman said is thought to be the “gold standard” for organic intelligence. While the human brains have a lot of promise due to their complexity, they also present problems.

“We do not fully understand our own brains, nor do we even have a universally accepted definition of what human intelligence is,” Coleman said. “We don’t know exactly why we sleep or dream. We don’t know how we process memories. We don’t know whether we have free will, or what consciousness is or who has it.”

Coleman said these unknowns make the task of coding a human brain very difficult, so scientists may have to look toward minds of other species, such as octopodes. She said Billye’s distributed approach to problem solving may be well suited to making robots that explore distant planets.

“The range of skill ingenuity and creativity of our biological brethren on this planet is astounding,” Coleman said. “We have a proclivity to only weigh their intelligence and skill in relation to our own. This human-centric view is limiting at best and dangerous at worst.”

Coleman is the author of A Human Algorithm: How Artificial Intelligence Is Redefining Who We Are and has worked with the United Nations, the United States federal government and organizations around the world. At 10:45 a.m. EDT Friday, Aug. 14, 2020, on the CHQ Assembly Video Platform, she discussed how people can make AI more empathetic, as well as the importance of non-human intelligence, to close the Chautauqua Lecture Series Week Seven theme of “The Science of Us.”

Coleman said the original computer — the human brain — has 100 billion neurons and 2.5 petabytes of memory, and has served humans for around 100,000 years.

“It is hard to overlook that it needs constant fueling to perform at even minimal levels,” Coleman said. “We all know how notoriously slow it can be to boot up in the morning.”

She said people are becoming more reliant on machines and more immersed in virtual life.

“A new era is upon us, and our lives are so seamlessly merging with the digital world that many of us don’t even notice,” Coleman said. “That is, until a global pandemic thrust us into a primarily digital existence, exposing both the promise and the frailties of the technological systems we have.”

These frailties include many people having no access to a laptop or a smartphone, according to Coleman. She also said that society is more focused on advancing technology and creating AI that is better at predicting outcomes, than how these tools will define the lives of current and future generations.

To address concerns about technology, Coleman said people need to address their own assumptions about the world, and “paradoxically, we also need to ask what technology can teach us about being human.”

Almost every major human achievement has been the result of our ability to collaborate, not the genius of some individuals, according to Coleman.

“Experts can often be the worst forecasters because they can be dogmatically siloed in their fields, and invested in being right,” Coleman said. “However, beginners, who have a fresh take without a stake in being the best, can often help us see what specialists cannot.”

Coleman said the technology mirrors its designers, and that a diverse group of participants is necessary in creating a fair and ethical AI.

“AI and computerization will be the biggest disruptors in the history of labor economies, and the challenges of the fast-spreading novel coronavirus have exposed the inequities in our societies, and how many essential workers are significantly undervalued and excluded,” Coleman said. “We’re going to have to reimagine our relationships with work and tap into our innate sagacity and creativity to navigate this brave new world.”

Along with octopodes, Coleman said other animals have incredible intelligence, from the memories of pigeons, spiders spinning webbed balloons to fly, and bees using dance to communicate complex information to their colonies.

“This is possibly the last frontier of scientific invention — maybe our chance to embrace our human limitations and to expand our worldview beyond ourselves,” Coleman said. “The science of us must have the broadest possible definition. Being willing to admit other species are brilliant could be the smartest thing we can do.”

The lecture then shifted to a Q-and-A session with Chautauqua Institution Vice President of Marketing and Communications Emily Morris. Morris asked Coleman how her work as a human rights attorney connects to her work with technology.

Coleman worked with the Genocide Prevention Center in 2001, where they used satellites to look for evidence of war crimes, such as mass burial cites.

“I kept thinking it’s not enough, because everyone is already dead and gone,” Coleman said. “While it’s so important to have a record of abuse and the things that have happened, the worst things we can do to each other, I thought, ‘How can we do more?’”

Coleman then looked into artificial intelligence and saw the field needed a human right’s perspective, which led her to writing A Human Algorithm: How Artificial Intelligence Is Redefining Who We Are.

Morris asked Coleman how the average person could get involved with making ethical AI.

Coleman said that the fields of programming and other technology are not the only aspects of society that need more inclusion; it’s needed at “every echelon of leadership” from the school boards to local government.

“We can, inch by inch, brick by brick, take tiny actions every single day. Your life is a million tiny moments, mostly unseen,” Coleman said. “How can you serve another today? How can you care for someone else? How can you amplify someone else’s voice? How can you stand up for social justice with whatever skills you have at hand?”