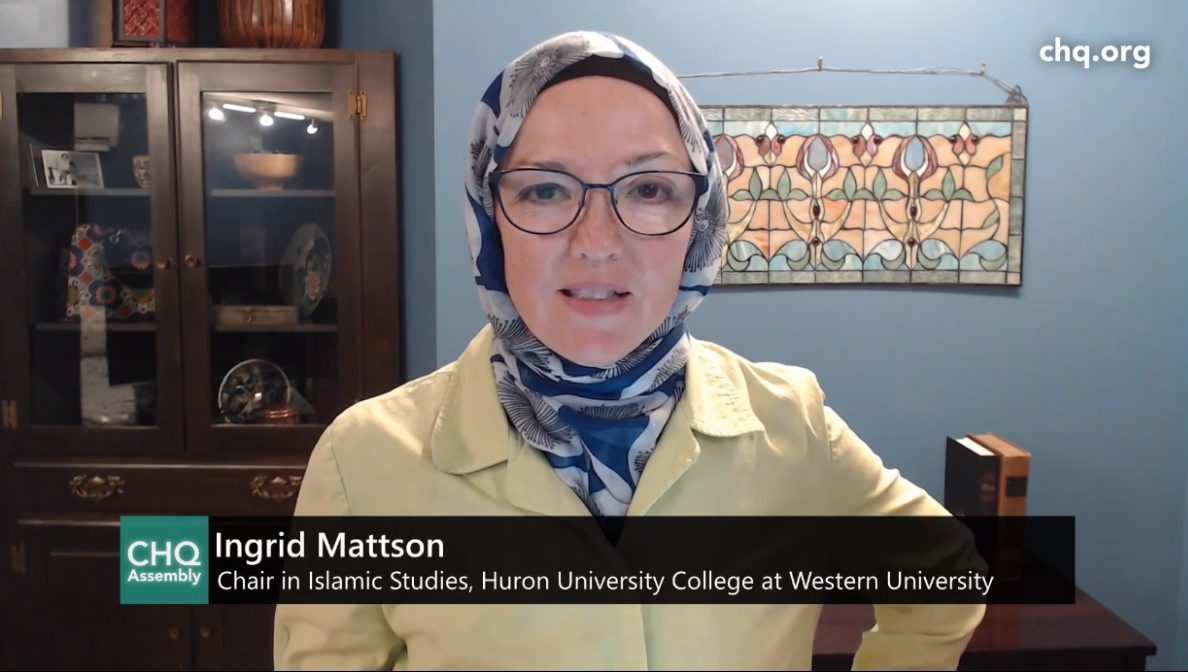 “Be in this world as if you are a traveler” is a teaching from Islam prophet Muhammad. In her lecture of the same name, Ingrid Mattson explored what it means from an Islamic perspective for people to be spiritually united.

Her lecture was broadcast at 2 p.m. EDT Thursday, Aug. 13, on the CHQ Assembly Video Platform. Recorded in Mattson’s home in London, Ontario, her lecture aligned with the Interfaith Lecture Series theme for Week Seven, “The Spirituality of Us.”

Mattson is the president of the Islamic Society of North America. She also serves as the London and Windsor Community Chair in Islamic Studies at Huron University College, the oldest affiliate college of Western University in Canada.

In July, Mattson said she was struck by an Architectural Digest article that recommended 41 design shows available on streaming services. It demonstrated a new shared interest in not only spending time at home, but investing in the home and family.

Mattson said that while there was an existing desire for consuming the latest products, this energy has been redirected into the home. Breadmakers. Swing sets. Swimming pools. Gardens.

Meanwhile, there are also those who go without these luxuries during the COVID-19 pandemic.

“For many, lockdown means no access to green space,” Mattson said. “Lockdown means crowding with no privacy. Lockdown means being trapped in an unsafe place. We are not truly having a common experience.”

And before lockdown, nationalism and ethnic nationalism were already rising and dividing people across many countries, which enforced their constructed borders that housed those identities.

“But in this case of the pandemic, the regulation of human proximity and movement-insured spaces does have a scientific — rather than ideological — basis,” Mattson said. “An American paradox is that many of the people who claim to be worried about foreigners transmitting an ideological and cultural virus — which is not a real thing, by the way — are strangely unconcerned about viral infection, which is a real thing.”

Mattson said that while (most) people are sheltered in place, ideology is spreading out of fear. But the virus moves faster.

“It’s not surprising that in these — still early — days, the most ideological have doubled down in their views,” Mattson said. “But the virus continues its replication and its travels throughout the world, indifferent to our ideologies.”

While the pandemic continues, Mattson said people who were previously defined by their mobility or displacement have faced challenges.

“Until the lockdown, many of us found it unremarkable that we could frequent malls and amusement parks, restaurants and music venues. The privileged were taking the world as their oyster, taking cruises, safaris, study tours, sporting holidays, trips to the beach,” Mattson said. “And before the lockdown, the world’s disadvantaged were struggling to flee their homes, to escape political oppression and violent occupation, to move to higher ground, or to find a source of water as climate change has rendered their homes unlivable.”

For the displaced, Mattson said the pandemic has exacerbated their conditions. And prior to the pandemic, the United States had been gradually closing its borders to others who seek to migrate or flee their home countries while simultaneously strong-arming other countries to allow U.S. intervention. Now, U.S. citizens are seeing their international travel options contract as COVID-19 continues to spread in the United States.

“So many of us in the Western world feel entitled to have both a national home that is ours, from which others are locked out, and the right to exploit the rest of the world,” Mattson said. “We demand that other nations remove their barriers to what we want. We should be able to exploit their markets, their natural resources, and we should be able to carry our ideologies and culture to their people without restriction.”

Mattson said that along with other modes of transportation, the human body is geared for forward movement, with eyes and feet directed ahead — even when losing or missing limbs. And in the Qur’an, God calls for humans to spread across the Earth as well.

In the Qur’an, God speaks in Chapter 17, verse 70: “We have conferred dignity on the children of Adam and transported them over land and sea and provided with them sustenance out of the good things of life and favored them far above much of our creation.”

Mattson said that God directs humans to remove obstacles for others, and to clean up after ourselves. The Qur’an says that wealth and children are joys and temptations for excess at the same time.

“The Qur’an encourages the enjoyment of wholesome and beautiful things, and it prohibits waste and excess,” Mattson said.

In Chapter 6, verse 141, the Qur’an states, “It is God who has brought into being gardens, the cultivated and the wild, and date palms and fields with produce of all kinds; olives and pomegranates, similar in kind and diverse. So eat of their fruit in season, but give their due on harvest day, to the tithe or some to the poor on harvest day. And do not waste, for God does not love the wasteful.”

But the Qur’an also notes that unbridled desire is insatiable. The prophet Muhammad said, “If the child of Adam has a mountain of gold, he would wish for another mountain.”

Mattson said that it was important to prioritize collecting acts of kindness rather than material things, but it’s possible to strike a balance.

“Enjoy the things, and enjoy them with others,” Mattson said. “Elevate ourselves through sharing and caring. For it is in service to others that we find the divine presence, which is our true home.”

Returning to Muhammad’s teaching on moving through the world as a traveler, Mattson said one interpretation of this teaching was to literally travel light. Muhammad also taught that each day, each person should perform an act of charity, even as simple as moving a branch from the road.

“There are so many people who would like to move to safety or like us, who like to explore human culture through education, or the natural world through travel. But their paths are blocked by barriers placed by others,” Mattson said. “To remove a branch, to make the path smoother, to clear it, is an act of charity.”

Mattson said in the 2012 documentary “Never Sorry,” about artist and activist Ai Weiwei, a group of cats lived in Weiwei’s Beijing studio. To go outside, a cat had to jump up and hit a lever to open the door. Only one cat was ever successful in hitting the lever after a few tries. When he did, instead of turning and closing the door, he left it open for all the other cats to follow him out each day.

“Cats, unlike people, never close the door after them,” Weiwei said.

Weiwei has since focused his work on human migration. In 2017, he made the documentary “Human Flow.”

“(Migrants, refugees and asylum seekers) are blocked from the natural flow of human beings that has occurred since humans were first on this earth,” Mattson said. “And we know that for a fact. From archaeology, from looking at where human beings are across the world, we know that human beings have been in movement from the beginning. And now we have this situation where we have hard barriers and people can’t move anymore.”

Mattson said the pandemic has kept everyone stuck in place, but nationalists and white supremacists already sought to keep the “other” out.

“The chant of the ethnic nationalists and the white supremacists is, ‘You will not replace us,’ the idea that there is a human ‘us’ that is so distinct and so different from all other human beings that if others come along — as humans have been doing forever — that somehow it’s like another species,” she said.

Nations have a “mythic, fabricated ‘us,’” which some of its people build a purpose onto identities that can be hateful.

“I say it’s fictional because a quick genetic test would probably prove that a lot of people’s claims are incorrect,” Mattson said.

Culture also constantly changes, yet Mattson said no one can resist attaching meaning to these identities.

Before Islam became popularized in the area, Mattson said that people in the Arabian Peninsula did not believe in an afterlife, but still sought the immortality of their name through conquering and fame.

“If they disappeared in a material sense, as long as their names were spoken, they still existed,” Mattson said. “And they were willing to violate others as long as doing so increased their numbers and their fame.”

With more people in the tribe, it also meant more people could survive and allow the person to live on in their stories.

The Qur’an stands in contrast to the empires of Babylonians, Sasanians, Sumerians, Hittites, ancient civilizations of western Asia and the eastern Mediterranean, all of which are now gone. The Qur’an states that while everything on Earth will disappear, the divine presence remains.

“Eventually the kings died, the people disappeared, and their grand monuments now have crumbled,” Mattson said. “And they are sites where we go and reflect upon people of the past whose names we don’t even know. We might know the names of a king or a few kings or queens, but all of those people who came before, nothing remains of their memories or their name.”

The children of Adam, humans, can return to the original source of goodness for unity. Mattson said that people connect to others to access this on Earth, whether at a place of worship or a musical experience.

People are born into specific times and specific places, which Mattson said makes people both similar and different at the same time. And the diversity of people is celebrated in the Qur’an.

“Our very diversity is the starting point for knowledge in ourselves and others,” Mattson said, and uncovering the history of humanity and movement of people leads back to the common origin of the divine.

Though people are varied, according to the Qur’an they all have “fitrah,” which is Arabic for a pure, good foundation. But being born into a specific history can place a person in circumstances that can either nurture or deviate from fitrah. A person might need help to return to their fitrah.

To sustain or return to fitrah and live a spiritual life on earth, Mattson said it’s important to remember that everyone is going to the same place.

“To live a spiritual life is to be like a good traveler,” Mattson said. “ … To be grateful to those who have facilitated our journey, to help others who have been on the road along with us, to respect the customs of the land we are visiting, to accept graciously what is offered, and to share it with others — and to never leave a place unless it is at least in as good a shape as we found it when we first arrived.”