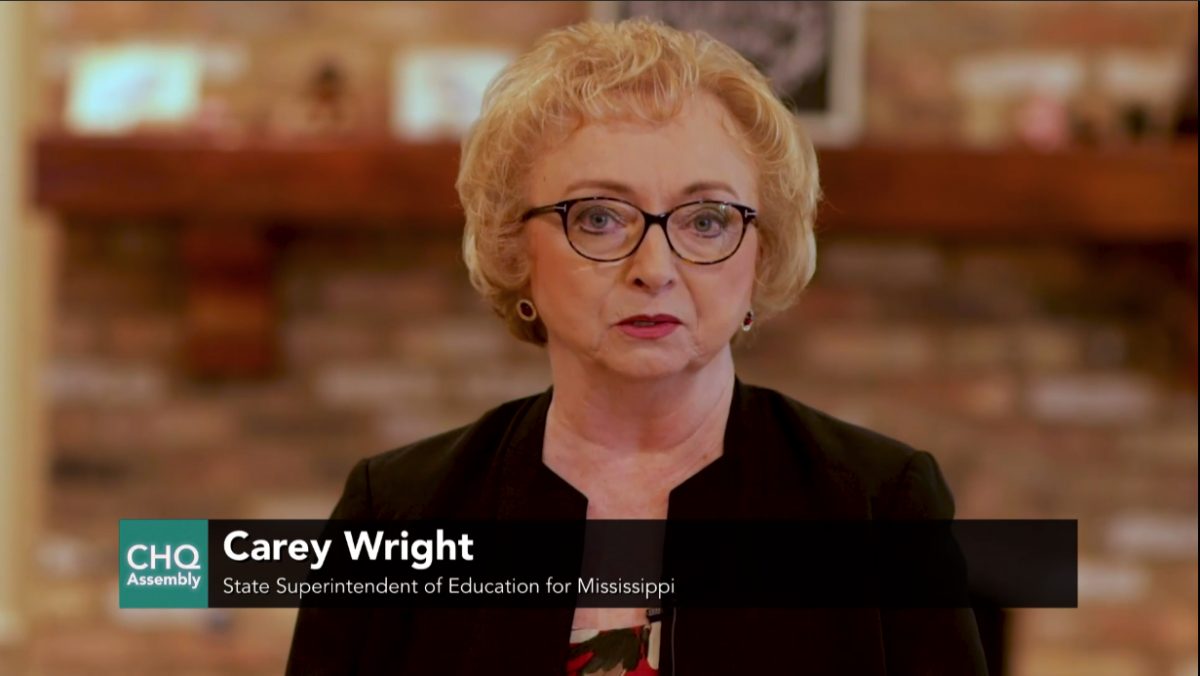 “Mississippi’s reputation and public education has been linked to its overall reputation,” Wright said, “bringing in mind issues such as segregation, poverty, and some of the lowest-performing indicators in both health and education.”

At 10:45 a.m. EDT Friday, Aug. 7, 2020, on the CHQ Assembly Video Platform, Wright delivered a lecture titled “What Has Worked in Reforming Mississippi’s Education System.” She talked about how Mississippi’s education system was routinely ranked as one of the worst in the United States, and how better equipping students and teachers has given the state some of the most momentum in the nation around education.

Wright started her career as a teacher, then an elementary school principal before taking on leadership roles at district and state levels. She has worked in suburban and urban districts, and with students and families across all socio-economic statuses.

“Throughout my career, my guiding principle as an educator has been one, firm belief that all children can learn and succeed,” Wright said.

When Wright arrived in Mississippi in 2013, Quality Counts, an annual analysis of American education systems by Education Week, ranked the state’s education system 50th in the nation, and its high school graduation rate was 75 percent. Currently, Mississippi’s graduation rate is 85 percent, an all-time high for the state, and has improved in K-12 achievement, students’ chances for success, and equity of education.

Wright said that Mississippi is no longer at the bottom and the state has a lot of momentum going into the future. Despite these achievements, Wright said that there are still skeptics within the state.

“I think the story has been told for so long about us always being at the bottom, that they don’t really understand what our schools and our teachers have achieved in the recent years,” Wright said.

Mississippi adopted a variety of policies to change their education system, such as the Common Core State Standards in 2010. Wright said that one of Mississippi’s previous standards was that kindergarteners were only expected to count to 10; now their new standard is children counting to 100.

“We desperately needed higher academic standards. So we adopted those standards and they gave us the foundation to raise the bar for children in Mississippi,” Wright said. “We have since reviewed, revised our standards, and we have even renamed them.”

These higher standards for students required teachers to be able to teach at a higher level with new methods, and Wright said Mississippi passed legislation to help students and educators, including the Early Learning Collaborative Act the Literacy Based Promotion Act.

In 2013, The Early Learning Collaborative Act gave pre-kindergarten classes public money for the first time in Mississippi history, creating 1,500 programs, which Wright said has since doubled, in the most underserved areas of the state. She also said each year educators press Mississippi legislators to make kindergarten mandatory.

“So many children start behind their peers when they enter school. By age 3, children coming from low-income families have heard 30 million fewer words than their counterparts in affluent families,” Wright said. “That is a significant difference, and this difference has been linked to deficiencies in third-grade reading.”

The Literacy Based Promotion Act focused on reading from pre-K through third grade, requiring that students pass a reading test to be promoted to fourth grade, as well as better training for teachers.

Wright said the most important decision a principal makes is who they hire as teachers, because a teacher’s effectiveness is the most important factor for students’ success. She said that children that spend four to five years with highly effective teachers can have the potential to “totally eradicate (poverty’s effect) on student achievement.” This importance of teachers is part of the reason why Wright has focused on the development of educators and shifted the mindset of the Department of Education in Mississippi from trying to make schools and districts comply with their orders, to providing support and resources.

Once the resources in place and the door to success in education is opened, Wright said students naturally walk though.

“Mississippi students are changing this culture of low expectations,” Wright said. “I am an eternal, eternal optimist. I believe so deeply in the capacity of all children to learn and grow. We all must believe this is possible. We’ve got to believe that the impossible is possible.”

The lecture then shifted to a Q-and-A session with Shannon Rozner, chief of staff and vice president of strategic initiatives for Chautauqua Institution. Rozner asked if Wright always wanted to be an educator.

Wright said she always had a passion for teaching, and she gained even more motivation when she first taught in Maryland in the 1970s.

“Watching … fifth graders and sixth graders that were reading at a first- and second-grade level, it just broke my heart.” Wright said, “It was from that moment that I thought, ‘Regardless of who comes through that door and regardless of where they are, (we need) to make sure that they leave in a much better place than they arrived.’”

Rozner then asked about generational shifts, especially with students learning virtually due to the COVID-19 pandemic and not interacting in person.

Wright said that part of Mississippi’s digital plan for school is expanding tele-health and tele-therapy, or health care that does not have to be in person. She also said that they are working on ensuring that more people have access to pediatricians and mental-health therapists.

“This is a community. It’s got to come together and we can’t ignore the fact that children are struggling, but so are parents, so are teachers,” Wright said.