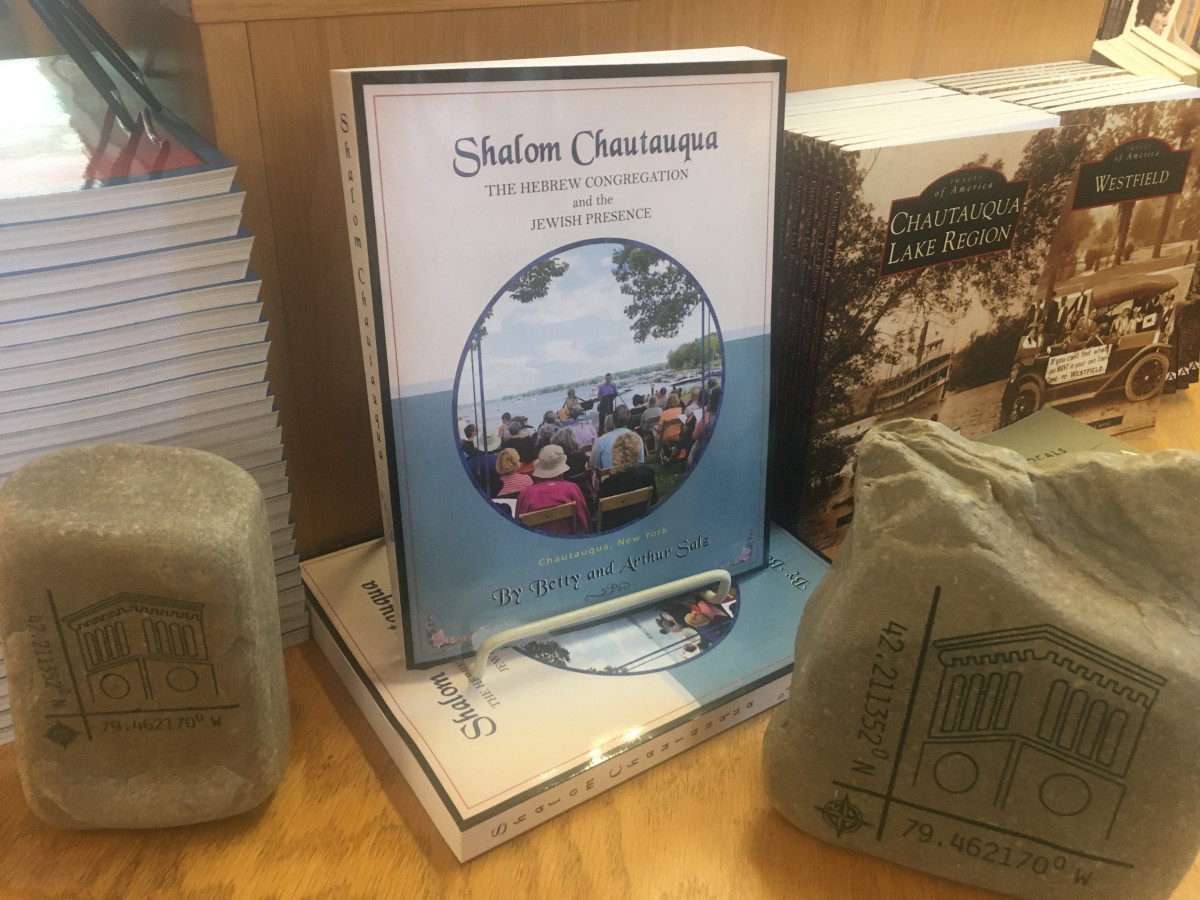 Some people claim that the first Jew to spend the whole summer at Chautauqua was George Gershwin. There were at least two Jews in the very first Chautauqua Literary and Scientific Circle class in 1882. In 1891, Bishop John Heyl Vincent introduced the first rabbi to speak at Chautauqua, Rabbi Gustav Gottheil, saying that Chautauquans had long been acquainted with dead Hebrews, but would now hear from a living one.

These and other fascinating stories are part of Shalom Chautauqua, the newest book from Arthur and Betty Salz, which tells the story of the Hebrew Congregation and the Jewish presence in Chautauqua.

“We wanted to stress the gradual embrace of the Hebrew Congregation and the general presence of Jews in Chautauqua,” Arthur said.

They got the title, Shalom Chautauqua, from a speech given by former Chautauqua President Daniel Bratton.

“He used the phrase 12 times in one speech,” Arthur said.

Chautauquans had learned about Biblical Hebrews in education classes and lectures in the Amphitheater. There were lectures on Jewish immigration, especially New York City, near the end of the 19th century, and about sweatshops.

The Hebrew Congregation first met in 1959 after two junior orchestra students, Barbara Wolfson and Betty Shine from Buffalo, wanted to go to services in Jamestown. Their house mother, Mrs. Weber, called Rabbi Julius Kerman of Temple Hesed Abraham to see if it was possible. He said it was too far to come for the very short Friday night service and there were no Saturday services in the summer.

The church gave permission for the Hebrew Congregation to meet there, and there they have been ever since.

In 2017, the congregation was four years away from celebrating its 60th anniversary. Betty had the idea for a book. She was serving as the archivist for the congregation and knew there was material going back to 1959.

“The Hebrew Congregation was one of the first religious groups to house its archives with Chautauqua Institution,” she said.

They started interviewing people and then took the idea to the governing board of the congregation.

“There was no objection and general enthusiasm,” Arthur said. “We can’t stress how much we learned writing this book and the joy of writing it.”

One of the people responsible for bringing many Jews to Chautauqua was Mischa Mischakoff, concertmaster of the Chautauqua Symphony Orchestra for many years. He encouraged musicians to come and play for the symphony and to bring their families.

“But the New York City school teachers were the real Jewish presence on the grounds in the beginning,” Arthur said

The invitation by Gene Robinson, vice president for religion and senior pastor at Chautauqua, to Rabbi Sharon Bros to be a chaplain of the week in 2019 — the first rabbi in Chautauqua’s history to preach from the Amp stage — was another high point.

“Rabbi Spong also opened doors with his knowledge of the Bible,” Betty said. Rabbi Spong? She was speaking about Episcopal Bishop John Shelby Spong, a staple of the Interfaith Lecture Series in the Hall of Philosophy for many years.

She laughed. “He was like a rabbi opening doors,” she clarified. “My Orthodox Jewish father loved listening to him. My father never would have heard him if it weren’t for Chautauqua. Not many places have grown this way. I think the founders would be thrilled.”

The Abrahamic Initiative, the building of the Everett Jewish Life Center and the opening of the Zigdon Chabad House show the growth and variety of the Jewish presence at Chautauqua.

The book itself is divided into eras, with several chapters in each era detailing the speakers, events and challenges of each era. The book ends with letters from the congregation’s presidents, reflecting on “My Jewish Journey.”

Because of the novel coronavirus, the celebration for the 60th anniversary of the Hebrew Congregation and the book will be held in 2021. It is available through the Chautauqua Bookstore, online or in the store.