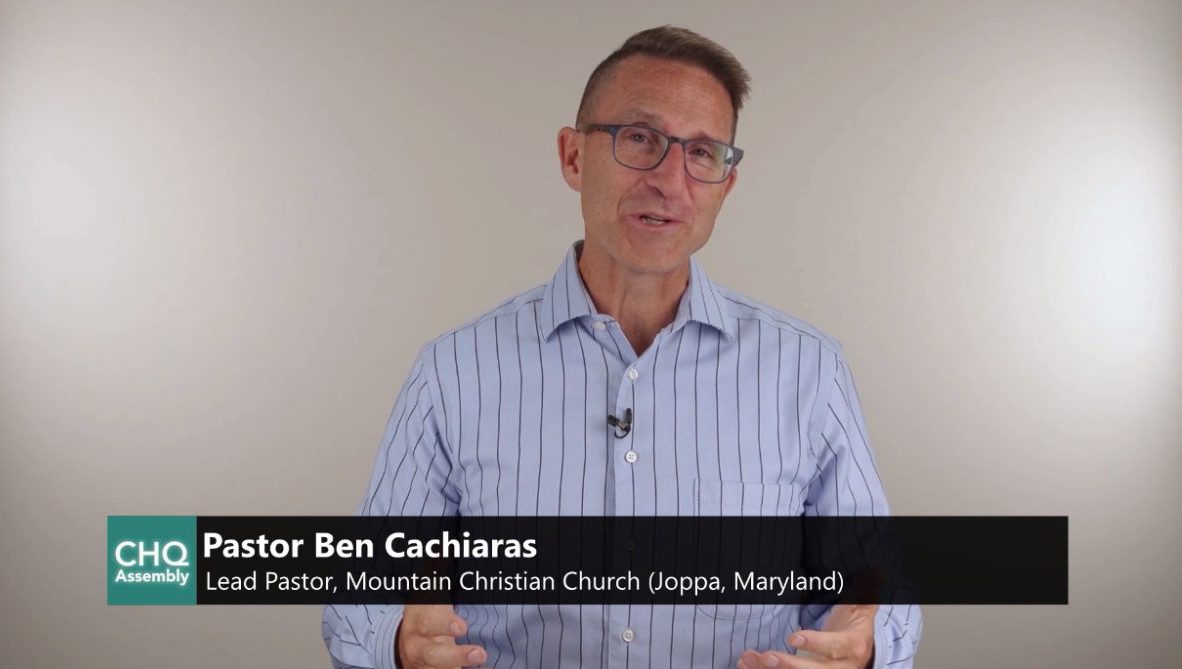 “We are in a difficult time — angry, ‘angsty’ and anxious. We are ‘politicked off,’” Pastor Ben Cachiaras told the congregation. “The church is seen as part of the problem, and sometimes we are.”

Cachiaras preached at the 10:45 a.m. EDT Sunday, Aug. 23, service of worship and sermon on    the CHQ Assembly Video Platform. His sermon title was “The Separation of Church and Hate: Remember Your IDENTITY.” The scripture text was 1 Peter 2:9-12 (NRSV) —

“But you are a chosen race, a royal priesthood, a holy nation, God’s own people, in order that you may proclaim the mighty acts of him who called you out of darkness into his marvelous light. / Once you were not a people, / but now you are God’s people; / once you had not received mercy, / but now you have received mercy. / Beloved, I urge you as aliens and exiles to abstain from the desires of the flesh that wage war against the soul. Conduct yourselves honorably among the Gentiles, so that, though they malign you as evildoers, they may see your honorable deeds and glorify God when he comes to judge.”

“If we are followers of Christ, we need distinctive thoughts and attitudes. If our political identity is primary, it affects the church and its reputation,” Cachiaras said. “If we don’t have the gospel to pull us together, we are just a reflection of local politics and we have nothing to offer.”

Since we live in a post-Christian society, Cachiaras told the virtual congregation, “we are not the big dogs anymore. We are anxious about our position in an unchurched America.”

Some people think the church should bend and blend with the culture. Others think that Christians should flee the culture, or fight the culture.

“Jesus ate with sinners, so fleeing is irrelevant, and God needs to win the culture wars to do away with injustice. But if the church is in the culture war without God, it is just scary and ugly,” he said.

Cachiaras’ sermon series is based on five positions: Remember your identity, behave with civility, demonstrate humility, strive for unity, be known for charity, and live with clarity.

Cachiaras continued, “But if we are a follower of Jesus, our primary identity is in Christ. We do everything under the lordship of Jesus Christ.”

“Christian” is not an adjective, it is an identity. Without giving first allegiance to Jesus, nothing works.

“Anytime we put our nation above God, God is not happy,” Cachiaras said. “It is easy to look back at the Crusades and ask, ‘What were they thinking, killing children in the name of God?’ It is harder to see in (the) present time. We can’t just go slapping bumper stickers on our cars.”

Christain is an identity, he reiterated. Paul wrote that he had died in Christ and now Christ lived through him.

‘If we say, ‘I am a Trump person,’ or, ‘I am a Biden person,’ we give up the chance to tell the story of Jesus,” Cachiaras said. “We should be known for only one thing — as servants of Christ, as Paul wrote to the Corinthians.”

Cachiaras said that if Christians were half as excited about Jesus as they are about politics, there would be a revival happening.

He told the congregation, “We are God’s own possession, and our identity leads to our function. Who we are determines what we do. Remember you are children of God — now act like it.”

Cachiaras told a story about wanting to go to a party in grade school because all the cool kids were going to be there. His parents sat him down and asked questions like, “Why do you want to go? Who is going to be there? What about the parents?”

His parents decided he could go. As he went out the door his mother said, “Remember who you are.”

Cachiaras said, “There was nothing more powerful she could say. It was not a guilt trip, but a reminder of who I wanted to be and my link to others.”

The Rt. Rev. V. Gene Robinson, vice president of religion and senior pastor at Chautauqua Institution, presided at the service from the Hall of Christ. Chautauqua interim organist Joshua Stafford played “Melody,” by Samuel Coleridge-Taylor, for the organ prelude on the Tallman Tracker Organ. The first hymn was “Holy, Holy, Holy,” by John Bacchus Dykes. Guest artist Amanda Lynn Bottoms sang the words to the hymn. Bottoms sang “Thou Shalt Bring Them In,” from Israel in Egypt, by George Freidrich Handel, for the anthem. The offertory hymn was “The Church’s One Foundation,” by Samuel Sebastian Wesley, sung by Bottoms. The offertory anthem, sung by Bottoms, was “Differences,” by Florence Beatrice Price, words by Paul Lawrence Dunbar. Bottoms sang “The Lord Bless You and Keep You,” by Carl Haywood, for the choral response to the benediction. The organ postlude was “Toccata,” by John Weaver. This week’s services are sponsored by the Alison and Craig Marthinsen Endowment for the Department of Religion and the Daney-Holden Memorial Chaplaincy.

Notes on this morning’s music: Today’s offertory anthem was composed by Florence Price, the first Black woman to have a composition performed by a major orchestra, whose works we have heard throughout this season. This song is a setting of Paul Laurence Dunbar’s poem “Differences,” commenting on the suppositions we make about one another. Dunbar was born in 1872 to freed slaves in Kentucky, and became one of the first influential Black poets in American literature. While on a six-month reading tour of England, Dunbar befriended (and eventually collaborated on an opera with) the composer Samuel Coleridge-Taylor, of Sierra Leone Creole heritage, whose “Melody” we heard as today’s prelude.

Our postlude today is the “Toccata” by John Weaver, one of the most notable organ teachers of the late 20th century. He was head of the organ departments at both the Curtis Institute of Music from 1972 to 2003 and The Juilliard School from 1987 to 2004.