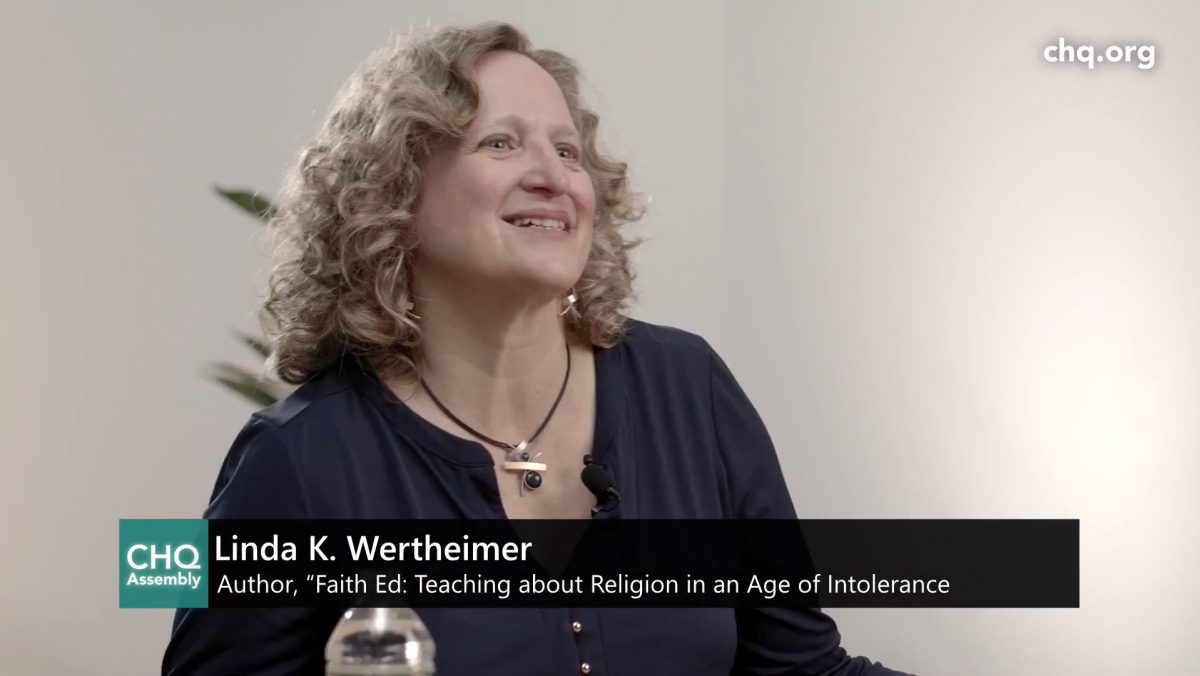 On the day of the Chabad of Poway synagogue shooting on April 27, 2019, the late Lori Gilbert Kaye was there to sing the mourner’s kaddish in honor of her late mother.

“(The shooter) killed someone who could’ve been me,” Linda K. Wertheimer said. “I am a Jew. I go to the temple every morning to sing the mourner’s kaddish.”

Wertheimer gave her lecture, “From Fear to Hope: Childhood Experiences with Anti-Semitism/How to Teach Respect,” as part of Week Six’s Interfaith Lecture Series theme, “Lessons in the School House.” After the lecture, which took place on Wednesday, Aug. 5, on the CHQ Assembly Video Platform, Wertheimer answered questions from Vice President of Religion and Senior Pastor Gene Robinson, who delivered questions through the www.questions.chq.org portal and on Twitter with #CHQ2020.

In 2017, Wertheimer was a writer-in-residence for a week at Chautauqua, but her earliest memory on the grounds is visiting with her parents to see Margaret Mead speak. Wertheimer is a veteran journalist, essayist and award-winning education writer. Her lecture pulled from personal experiences and cross-country reporting on religion in schools for her book, Faith Ed: Teaching about Religion in an Age of Intolerance.

“I know when it comes to religious bigotry, Jews are not the only target,” Wertheimer said. “Muslims, Sikhs and Hindus have also faced harassment because they are often seen as the Other in our predominantly Christian country.”

Muslims and Sikhs have been targeted as part of Islamophobia post-9/11. In 2012, six Sikhs were shot in a Wisconsin temple.

When Wertheimer’s family moved from New York to northeast Ohio in 1974, her personal experiences with religious discrimination would intensify in the Van Buren school system.

“All I wanted was to fit in,” Wertheimer said, reading from her book.

Paid by local Protestant churches, the church lady and others like her visited different schools to preach to elementary school classes. When Wertheimer’s mother asked the superintendent to ask the school board to stop these classes, the school board vetoed the request. Her parents debated on whether to pursue legal action until later that same week, when the local KKK organization had set fire to a cross in the front yard of a Black household.

Wertheimer’s teacher would sit with her in another room when the church lady came to the class. But one day, her teacher told her to sit in a broom closet and left her there until it ended. After her mother complained, Wertheimer was directed to sit in the library.

“It was hard enough being the new kid,” Wertheimer wrote. “Now, I was subject to regular interrogations by some of my peers.”

One of her classmates asked her why she didn’t stay for the church lady’s lessons. When Wertheimer told her classmate that she was Jewish, they didn’t know what that meant. Wertheimer was in elementary school at the time and couldn’t articulate it, either.

She knew less about what Judaism was and more about what her Jewishness was not in relation to Christianity. A youth minister would invite students to youth group events during lunch. Pastors led prayers in Easter and Christmas school assemblies.

At 12 years old, Wertheimer convinced her parents to let her quit Hebrew school on Sundays. Only two or three other Jewish families lived in the same town as them. The two closest synagogues were both an hour away.

When she became old enough to drive and gave a basketball teammate a ride home from practice, her teammate asked her if she believed in Jesus. Wertheimer, still Jewish, said no.

“You’ll end up in hell,” her teammate said.

Shortly after her brother Kevin was cursed at on the bus by other students, one Sunday morning her family woke up to anti-Semitic graffiti on almost every window of their house. Outside, they found a white swastika on her brother’s car, a lime green Barracuda, in the driveway.

When learning about the Holocaust in history class, the teacher read a few paragraphs from the textbook. Wertheimer said he treated it as if it happened hundreds of years ago. A student behind her leaned forward to whisper a slur, and added, “My grandfather was in the KKK.”

As an adult, Wertheimer researched court battles for her book and discovered that in 1948, 25 years before she would meet the church lady, the church lady’s role had been legally outlawed.

In 2010, she read an article about Wellesley Middle School students in the sixth grade who visited a Boston mosque as a field trip for their Global Beliefs course. A few students had been filmed actually participating in the praying when they were just there to observe.

The school scheduled another mosque visit in the next Global Beliefs course, but moved it to a less populated suburban mosque that wasn’t used for prayer during the visit. Wertheimer was able to sit in on the field trip.

“This was not indoctrination,” Wertheimer said. “This was the kind of education I had wished for my peers and myself in Ohio.”

It wasn’t just a history class. It dealt with current events and dispelled stereotypes of different religions. Wertheimer interviewed students during the course and subsequent years after they had completed it to measure the course’s effectiveness. At minimum, it delivered basic religious literacy. At maximum, it dulled the pain of past bullying that happened to students from minority faiths.

Two years after a Muslim student named Zain Tirmizi took the course, the Boston bombings took place. His family worried about both the victims of the terrorist attack and the likely backlash against Muslims.

And there was, in the form of a substitute teacher’s generalizing comments about Muslims in Tirmizi’s history class. Before Tirmizi spoke up, the substitute said, “Not all Muslims, of course.” The next day, other students told their teacher about it before Tirmizi had a chance to do it himself.

A few years before taking the course, Celia Golod, a Jewish student who was also in Tirmizi’s class, was subjected to a student who wanted to measure her nose. A year after the course, 80 of her classmates attended her bat mitzvah. They knew what the Torah was. They weren’t surprised by the yamakas.

“They had achieved basic religious literacy and could put it to practical use,” Wertheimer said.

In her interviews with people who opposed classes like the one at Wellesley, she said that most critics didn’t want any religion taught in schools out of fear.

Most objected to Islam in particular being taught. Controversy erupted in Lumberton, Texas, when teacher Sharon Peters’ geography lesson included trying on a burka, and in Tampa, Florida, when protests continued a month after Imam Hassan Shibly, who is also a lawyer, was a guest speaker for a religion course.

In Modesto, part of the Bible Belt of California, high school students are required to take a world religions course to graduate. While it’s never been very controversial, the occasional Evangelical Christian family or atheist student does object, but most comply.

One 14-year-old Pentecostal Christian student in the course was taught in church to shun religious idols — the Modesto teacher lined her windowsill with statues from different religions — and to fear other religions. But she also wanted to get an A in the course. When Wertheimer interviewed her a decade later, the student was no longer so afraid of other religions.

On the day of the Tree of Life Synagogue shooting, Wertheimer was hesitant to explain it to her 10-year-old son Simon. A few years before, his dad had read My Grandfather Has a Tattoo to Simon before telling him about Simon’s paternal grandmother, who survived the Holocaust and lost her parents and brother to the Nazis.

Wertheimer and her husband want Simon to understand his role in repairing the world, but Simon is now in seventh grade and has gone without religious course offerings.

Wertheimer said there is no way to tell that religious literacy education can prevent violence, but it has a place in condemning it.

“There is clearly no panacea against hate, but if educators don’t teach about world religions and they don’t teach about the dangers of stereotypes, it’s a critical mistake,” Wertheimer said. “As a society, we’ll end up normalizing acts of hate … and we’ll miss the opportunity to empower (children) with education, so they can stand up for the Zains, the Celias and so many other religious minority youths who may face bullying because of their faith.”

Tags : Faith Ed: Teaching About Religion in an Age of IntoleranceFrom Fear to Hope: Childhood Experiences with Anti-Semitism/How to Teach Respectinterfaith lectureLessons in the School HouseLinda K. Wertheimerreligion
previous article